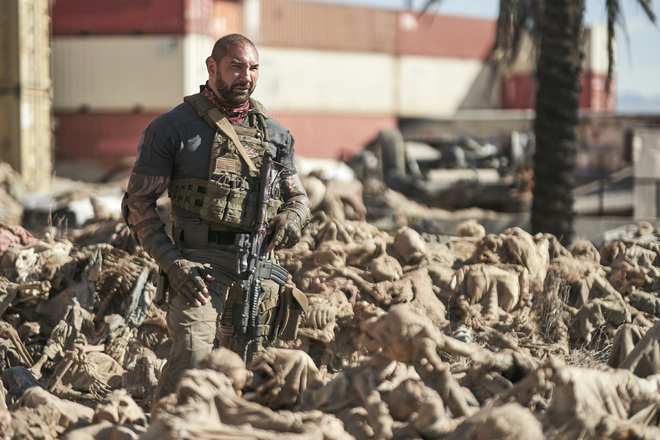 Army of the Dead is not for the weak-hearted

Area 51, 4th of July, a nuclear bomb drops in the Sin City with an ‘uninfected quarantine camp’. Army of the Dead with all its zombies in the foreground draws an uncanny parallel to current listless state the world is in.

Film: Army of the Dead

The plot is simple– there is a treasure and there is a team, which has 96 hours to get the ticket out of the boredom of regular life. Would they dare to pull a zombie heist? Well, this band under Scott Ward (Dave Bautista) does it for sure.

Coming from director Zack Snyder, who started with Dawn of the Dead (2004) and has Batman v Superman: Dawn of Justice (2016) and Justice League (2017) to his credit, has expectations to live up to. This film thrives on its core strength – the dread it builds in Las Vegas. Death, rebirth, destruction, renewal—an infinite loop that goes on and on, a question that the pandemic-stricken world is grappling with.

The different characters aim at the global appeal – yes, it’s English, but we hear French, German and Spanish phrases. There is Huma Qureshi playing Geeta. As this 148-minute film jumps from one sub-plot to another, the death and destruction constantly keep one hooked.

Bautista has got slick moves, Richard Cetrone as the alpha zombie lord is menacing. Qureshi is pivotal to the plot and lives the part in few minutes that she gets on screen. One starts to get fond of Dieter (Matthias Schweighöfer), Vanderohe (Omari Hardwick), Lily (Nora Arnezeder) and others but alas, we are living in the zombie land. Now, the mighty antagonists, call them half-dead or shamblers, are no ordinary corpses coming to life at importunate moment, but in Snyder’s world they are pretty athletic, and much like a quintessential Bollywood hero fond of showing off prowess in one-to-one combats. The story ends as most treasure hunts do. Army of the Dead is not for the weak-hearted. But if zombies entice you, feel free to enter this mesmerising world full of a zombie tiger and horse, duly lorded over by the king and the queen. What certainly scores for this Netflix release is the music, VFX and computer generated imageries which are spectacular.

Loading...
Denial of responsibility! TechiLive.in is an automatic aggregator around the global media. All the content are available free on Internet. We have just arranged it in one platform for educational purpose only. In each content, the hyperlink to the primary source is specified. All trademarks belong to their rightful owners, all materials to their authors. If you are the owner of the content and do not want us to publish your materials on our website, please contact us by email – [email protected]. The content will be deleted within 24 hours.
ArmyDeadentertainment newsEntertainment updatenews updatetechi liveweakhearted
0
Share