Notice: amp_is_available was called incorrectly. `amp_is_available()` (or `amp_is_request()`, formerly `is_amp_endpoint()`) was called too early and so it will not work properly. WordPress is currently doing the `pre_get_posts` hook. Calling this function before the `wp` action means it will not have access to `WP_Query` and the queried object to determine if it is an AMP response, thus neither the `amp_skip_post()` filter nor the AMP enabled toggle will be considered. It appears the theme with slug `publisher` is responsible; please contact the author. Please see Debugging in WordPress for more information. (This message was added in version 2.0.0.) in /home/runcloud/webapps/techilive/wp-includes/functions.php on line 5313
 Artist gives longer life to oil paintings - TechiLive.in 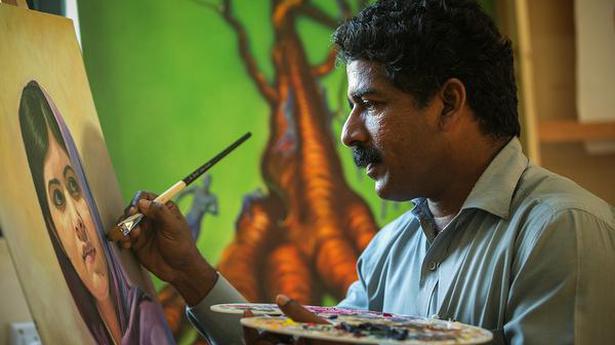 A large part of the past two-and-a-half years was spent in a laboratory by artist Suresh TR working with chemicals. He was on a mission to develop a formula that can remove fungus from oil paintings. He worked closely with K G Vinodkumar, general manager (QA and R&D) of Kochi-based Nice Chemicals. After days and hours of experiments — trial and error — the duo came up with a gel-based reagent, which can restore oil paintings without damaging them.

In January 2021, he restored artist Tom Vattakuzhy’s paintings that had been completely destroyed by fungus. The restored works, which looked as good as new, were then exhibited at the Durbar Hall Art Gallery. “Artists the world over, struggle with preserving oil paintings. Especially in humid places, fungus and mold affect them faster. For this reason, a number of artists who work with oil paints even migrate to other paints,” says Suresh. There are ways to remove fungus and mold, but they invariably affect the painting, he adds.

Ever since the idea occurred to him, Suresh says he started thinking like a scientist — looking at a painting from a microscopic level, beyond its aesthetic appeal. As part of his experiments, he even built a high humidity chamber at home where he left these paintings to understand the progression of decay. “Apart from environmental factors, the ratio of diluting agents in the paint, the methodology behind application of paint and the colours used in the painting can contribute to the formation of mold or fungus. These factors vary from artist to artist. I had to first understand the science of the painting before thinking of a solution to restore it,” he says.

“An oil painting could take up to 500 years to dry completely. And it is a challenge to preserve it, but any small attempt in preservation and restoration can encourage more artists to come back to this medium. It can also be a boon to curators, art institutions and museums,” Suresh adds. Artists usually resort to cumbersome methods such as wrapping their oil paintings with silica gel bags so that moisture does not get into them. “This becomes extremely difficult if the paintings are large in size,” says Suresh.

At his studio on Sahodaran Ayyappan Road in Kochi, he has started restoring oil paintings and has been getting enquiries from artists. The chemical formula he uses has two parts — one that can clean the canvas that has been affected by fungus and another that can be used for pre-treatment of the canvas, which would prevent fungus.

The founder of Prussian Blue Art Hub, Kochi, Suresh has been teaching art for over 17 years and painting for over three decades. A self-taught artist, who started his art practice working with oils says he gradually moved to other media because of the challenges that came with preserving an oil painting.

Loading...
Denial of responsibility! TechiLive.in is an automatic aggregator around the global media. All the content are available free on Internet. We have just arranged it in one platform for educational purpose only. In each content, the hyperlink to the primary source is specified. All trademarks belong to their rightful owners, all materials to their authors. If you are the owner of the content and do not want us to publish your materials on our website, please contact us by email – admin@techilive.in. The content will be deleted within 24 hours.
artistentertainment newsEntertainment updatefungus and mold on oil paintinggel-based reagentK G Vinod Kumarlifelonger
0
Share

The Best Lighting for Your Zoom Calls to Look More Professional