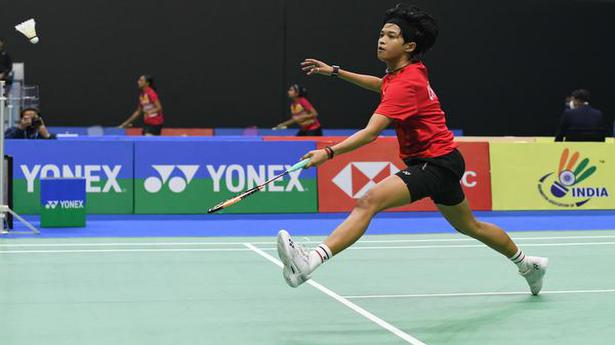 Ashmita Chaliha is part of the talented bunch aspiring to be the torch-bearer of India’s women badminton after P.V. Sindhu.

Ashmita took the first available opportunity of 2022 to serve a reminder by knocking out fifth-seeded Russian Evgeniya Kosetskaya from the $400,000 India Open here.

Before the bigger names in all sections won as expected on the opening day, the left-hander from Guwahati saved three game-points for a 24-22, 21-14 victory over Kosetskaya, the 2018 European championship runner-up.

Ashmita, the fourth highest-ranked Indian in the world list at 84, held a 19-16 lead in the first game before the Russian clawed back. Undeterred, Ashmita continued to attack and saved three game points from 19-20. Eventually, she converted her first game point. In the second, it was Ashmita all the way.

In the midst of one-sided encounters, that saw K. Srikanth and Sameer Verma stay on course for their third-round meeting, it appeared as though World champion Loh Kean Yew dropped the opening game only to get some extra on-court time. He breezed past Xiaodong Sheng, a Canadian of Chinese origin, in the next two.

Denial of responsibility! TechiLive.in is an automatic aggregator around the global media. All the content are available free on Internet. We have just arranged it in one platform for educational purpose only. In each content, the hyperlink to the primary source is specified. All trademarks belong to their rightful owners, all materials to their authors. If you are the owner of the content and do not want us to publish your materials on our website, please contact us by email – [email protected]. The content will be deleted within 24 hours.
Ashmita ChalihaAshmitaIndia OpenIndia Open BadmintonknocksKosetskayanews updatepv sindhu
Share

apple: Apple claims to have over 745 million paid subscriptions for its Services – Times of India