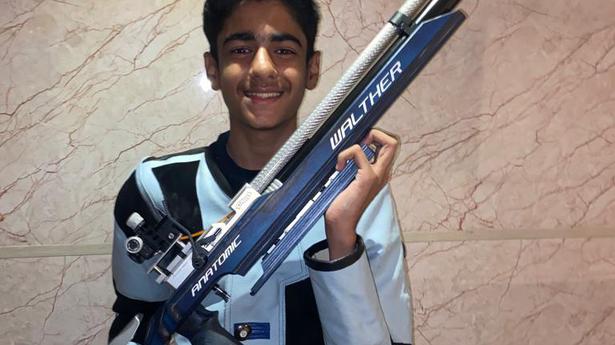 Ashutosh has his sights trained on Olympic participation

His father N. Mukesh Kumar is a renowned hockey player, having represented India at three Olympics besides being Asian Games gold medallist.

Taking inspiration from him and his mother Nidhi, who was also an Asian Games medallist in hockey, the 14-year-old N. Ashutosh Kumar is aiming to be a shooter of repute.

The ninth standard student of Kendriya Vidyalaya (Picket) has made the first big step towards realising his goal by qualifying for the National under-15 championship with a score of 383 in the 10m air rifle category at the recent South Zone pre-Nationals in Tiruchi (Tamil Nadu).

Coached by Kiran Patil at Gun For Glory Academy in Trimulgherry, run by London Olympics bronze medallist and ace shooter Gagan Narang, Ashutosh is “more confident” after having qualified for the Nationals. “I was definitely scared, but managed to overcome the fear factor, stay composed and come up with a score good enough to qualify,” he said.

For someone who couldn’t win a medal at the State level before, Ashutosh is now dreaming big.

“I have been watching videos of Gagan sir, since I was six years old. He was the inspiration for me to take up shooting. I used to play hockey and when my friend, who trained with me stopped suddenly, I also couldn’t continue, though it, obviously, disappointed my father,” he said.

Interestingly, Ashutosh’s elder sister Yeshaswini was India No. 7 in junior badminton before quitting the sport and becoming a chartered accountant.

“My ultimate dream is to make it to the Olympics. Though I know it is a long, long way to go, I will work hard to realise that goal. Yes, I want to make my parents and the country proud of me,” Ashutosh signed off.

Denial of responsibility! TechiLive.in is an automatic aggregator around the global media. All the content are available free on Internet. We have just arranged it in one platform for educational purpose only. In each content, the hyperlink to the primary source is specified. All trademarks belong to their rightful owners, all materials to their authors. If you are the owner of the content and do not want us to publish your materials on our website, please contact us by email – [email protected]. The content will be deleted within 24 hours.
AshutoshAshutosh Kumarnews updateOlympicparticipationShootingsightssports news
0
Share

‘Come on, OK? There can’t be that many ‘GOATs”: Federer’s epic reply to Greatest of All Time debate on him, Rafa, Novak

Everything You Need to Know About Ripple (XRP)