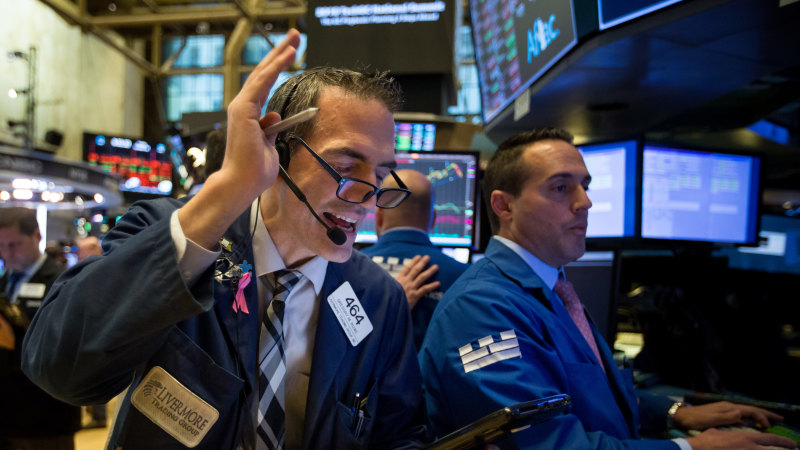 “The Fed wants inflation data to come down and it’s not going to retract its claws until that happens,” Young said. “Pretty quickly the narrative is going to shift to, ‘will the Fed go too far?‘”

Still, some on Wall Street are seeing signs for at least temporary optimism. Oil prices have come off their highs, though US crude rose 5.1 per cent on Monday. A key report released last week also indicated expectations are easing for inflation among households. That could prevent a more vicious cycle from taking root and ease the pressure on the Federal Reserve.

Expectations have come down for how aggressively the Federal Reserve will raise interest rates at its meeting next week. Traders are now betting on a roughly one-in-three chance for a monster hike of a full percentage point, with the majority favouring a 0.75 percentage point increase. As recently as Thursday, the heavy bet was on a hike of a full point.

Economists at Goldman Sachs are among those forecasting a 0.75-point increase, which would match last month’s hike, instead of a more aggressive one. They cited in particular the softening of inflation expectations after Chair Jerome Powell said last month that the Fed pays close attention to them.

Across the Atlantic Ocean later this week, investors expect the European Central Bank on Thursday to raise interest rates for the first time in 11 years to combat inflation. Many investors expect an increase of 0.25 percentage points, “but more is not unthinkable,” economists wrote in a BofA Global Research report.

Interest rates are one of the two main levers that set prices for stocks. The other is corporate profits, which are under threat given high inflation and slowdowns in parts of the economy. For the moment, at least, analysts are still forecasting continued growth.

Earnings season kicked off last week, and banks have dominated the early part of the schedule for reporting how much they earned from April through June.

Bank of America closed essentially flat after it fell short of analysts’ profit expectations. Despite all the worries about a possible recession, Bank of America said its customers’ spending and deposits remain strong.

Stocks also rose across much of the rest of Asia and Europe, with Germany’s DAX returning 0.7 per cent.

In the bond market, the yield on the 10-year Treasury rose to 2.98 per cent from 2.96 per cent late Friday. The two-year yield, which rose to 3.17 per cent, is still above the 10-year yield. Some investors see that as an ominous sign that could presage a recession in a year or two.

Underscoring worries about a recession have been recent reports showing slowdowns in parts of the economy because of the Fed’s rate hikes.

The housing market in particular has felt the effect of more expensive mortgage rates. A measure of sentiment among home builders released Monday weakened more than economists expected and sank to its lowest level in more than two years.

Denial of responsibility! TechiLive.in is an automatic aggregator around the global media. All the content are available free on Internet. We have just arranged it in one platform for educational purpose only. In each content, the hyperlink to the primary source is specified. All trademarks belong to their rightful owners, all materials to their authors. If you are the owner of the content and do not want us to publish your materials on our website, please contact us by email – [email protected]. The content will be deleted within 24 hours.
ASXbusiness newsBusiness updatenews updatePuffRallyretreatruns
Share