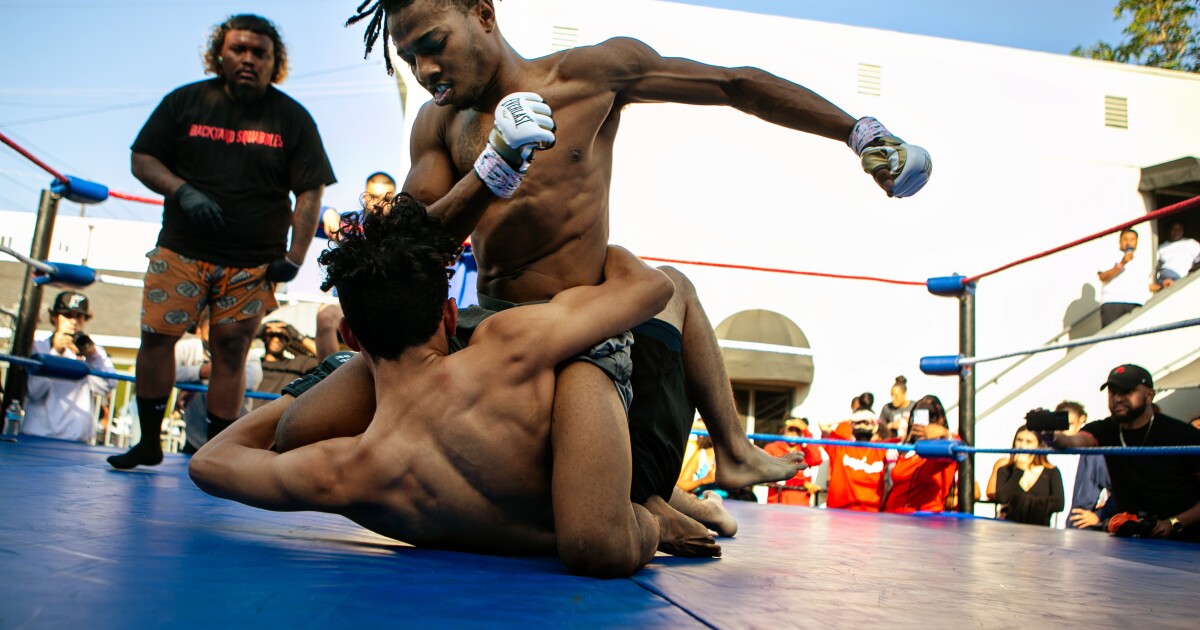 At an underground fight club born in the pandemic: Black Blade vs. Big Cheese

Dusk was falling when Black Blade and Big Cheese strode into the middle of the ring and touched gloves. They were scheduled to go five rounds, three minutes each, before the evening was through.

The crowd went quiet — or as quiet as a hundred or so people in a small, concrete backyard near downtown Los Angeles can be when a DJ is blasting “Whoopty,” vendors are selling sliders and pasta, a barber has set up shop near the fence, and the next guys on the ticket are sparring with their trainers.

The appropriately named Big Cheese outweighed his slender opponent. They weren’t supposed to be fighting each other at all. But there they were, squaring off in a temporary ring in a backyard on West Jefferson Boulevard on the last Sunday in May.

“I personally was gonna drop the Big Cheese fight and the Black Blade fight,” said Damian Gutierrez, founder of Backyard Squabbles. “Both of these guys’ opponents didn’t show up. But we matched them up because of the beef they had going on.”

Gutierrez is 20 years old. He lives in Gardena. When he’s not arranging fights, he’s a security guard at a sushi restaurant. He is named after an uncle who was shot to death at a doughnut shop at Imperial Highway and Normandie Avenue nearly two decades ago.

That violence is part of what prompted him to start Backyard Squabbles in the first place; the fight club’s motto is “Guns down, squabble up.”

Hector “Aztec Warrior” Herrera thinks Gutierrez is onto something. The people who come to Backyard Squabbles “are all peaceful,” he said, at least outside of the ring.

“I think they all know that, like, you look to your right or you look to your left, there’s a fighter,” said Herrera, who trains fighters and boxes himself. “Like, ‘Should I talk s—? No.’ That’s about it. … It’s pretty awesome.”

Gutierrez doesn’t know what the beef between Black Blade and Big Cheese was about or even what Big Cheese’s real name is. Two days after their fight, Albert “Black Blade” Marion wasn’t answering his phone.

Marion is tall, wiry and 22. He lives in San Pedro, installs cable for Dish Network, spends his free time playing video games and hanging out with his girlfriend. A normal routine for a young guy in the middle of a pandemic.

Normal and “boring,” he says.

He was a “rambunctious” boy — at least that’s what his mom called him. He had a hard time sitting still and finishing his homework. He’d even lose interest in TV. His mom’s solution was to keep him busy with physical activities such as tae kwon do and basketball.

Fighting has helped him focus as an adult.

His first round Sunday night against Big Cheese had a slow start. Marion landed a few punches, held his own against his heavier opponent. He got winded in the second round. And he didn’t make it out of the third.

Marion was pinned to the ropes with five seconds left. Big Cheese landed a solid blow to his head. Marion crumpled against his opponent, slid to the ground.

And stayed there for two very long minutes.

End result? A concussion and the loss.

“I took a L Sunday had plenty excuses but dude was 100lbs heavier than me,” he posted on Instagram, along with video of the fight’s painful end.

And then he promised: “I’ll be back.”

Loading...
Denial of responsibility! TechiLive.in is an automatic aggregator around the global media. All the content are available free on Internet. We have just arranged it in one platform for educational purpose only. In each content, the hyperlink to the primary source is specified. All trademarks belong to their rightful owners, all materials to their authors. If you are the owner of the content and do not want us to publish your materials on our website, please contact us by email – [email protected]. The content will be deleted within 24 hours.
bigblackbladebornCheeseClubFightnews update
0
Share