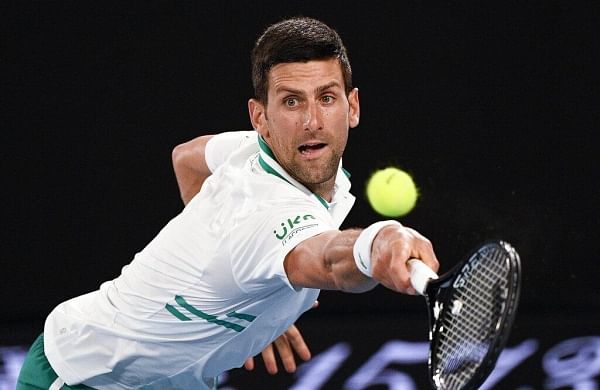 Novak Djokovic lost his first career Grand Slam final at the U.S. Open. Then he won his second, which came at the Australian Open.

And look where he is now, more than a dozen years later: One victory from a ninth championship at Melbourne Park and his 18th major title overall, which would put him two behind rivals Roger Federer and Rafael Nadal for the most by a man in tennis history.

Daniil Medvedev also lost his first career Grand Slam final at the U.S. Open. And now he will try to win in his second try, which comes at the Australian Open on Sunday (at 7:30 p.m. local time, 3:30 a.m. EST) — against Djokovic.

It is an intergenerational showdown — Serbia’s Djokovic turns 34 in May; Russia’s Medvedev just turned 25 — and another in the simmering standoff between the Big Three and the next wave of up-and-coming players hoping to supplant the group that has dominated for more than 15 years.

Federer, Nadal and Djokovic have combined to win 14 of the past 15 majors (Dominic Thiem at last year’s U.S. Open was the exception), and 57 of the last 69.

“Spice it up a little bit,” by adding a new name to the list of Slam champs, suggested Stefanos Tsitsipas, the 22-year-old who came back from two sets down to eliminate Nadal in the quarterfinals before losing to Medvedev 6-4, 6-2, 7-5 in the semifinals. “Wouldn’t be bad.”

Here’s part of what makes this final intriguing: It pits one of the greatest ever to play the sport, and at a site he’s dominated, against a player who currently is playing better than anyone in men’s tennis.

The No. 1-seeed Djokovic is 17-0 in Australian Open semifinals and finals, making him nearly as much of a lock on the blue hard courts of Melbourne Park as Nadal is on the red clay courts of Roland Garros.

“The more I win, the better I feel coming back each year,” Djokovic said. “I think it’s kind of also logical to expect that. The love affair keeps going.”

No. 5 Medvedev, meanwhile, is on a 20-match winning streak dating to last season, a run that features 12 victories against members of the Top 10 (one against Djokovic).

“The confidence, when you beat everybody, is just great,” Medvedev said, “because I think people start maybe to be a little bit scared about you.”

Another reason to watch: These guys play somewhat similar styles.

“When he’s in the zone he doesn’t miss. He goes down the line, cross, forehand, backhand. He doesn’t miss. That’s what is the most, the toughest, part of playing against him,” Medvedev said. “I think that’s where I should be good, also.”

Both are quite talented at roaming the court this way and that, covering ground to prolong points and frustrate foes, until finding an opening for switching from defense to offense in a snap.

That’s how Medvedev produced the shot of the day — week? tournament? year? longer? — against Tsitsipas, ranging wide of the deuce court’s doubles alley for a forehand return of serve, before sprinting to his left, sliding with his feet at an awkward angle and producing a down-the-line backhand passing winner that was simply spectacular.

He marked the moment with a yell, then raised his arms overhead and did a bit of a hand dance, getting a crowd that had been pulling for his opponent to shower him with praise.

“I wanted them to recognize me, I would say,” Medvedev explained, “because the shot was unbelievable.”

Djokovic’s been doing that sort of thing for years.

And now that he’s declared himself pain-free after hurting an abdominal muscle in his third-round victory — he initially declared it was torn — his full-on elasticity appears to be back at its best.

Then there is this aspect of the matchup: The one aspect of Medvedev’s game that is superior, his serve, will go up against Djokovic’s best-there-is return.

Denial of responsibility! TechiLive.in is an automatic aggregator around the global media. All the content are available free on Internet. We have just arranged it in one platform for educational purpose only. In each content, the hyperlink to the primary source is specified. All trademarks belong to their rightful owners, all materials to their authors. If you are the owner of the content and do not want us to publish your materials on our website, please contact us by email – [email protected]. The content will be deleted within 24 hours.
Loading...
18thAustralianAustralian OpenchasesDaniilDaniil MedvedevdjokovicMedvedev
0
Share

Babar Azam has proved great cricketing sense with bat, has to prove it in captaincy now: Pakistan coach Misbah-ul-Haq