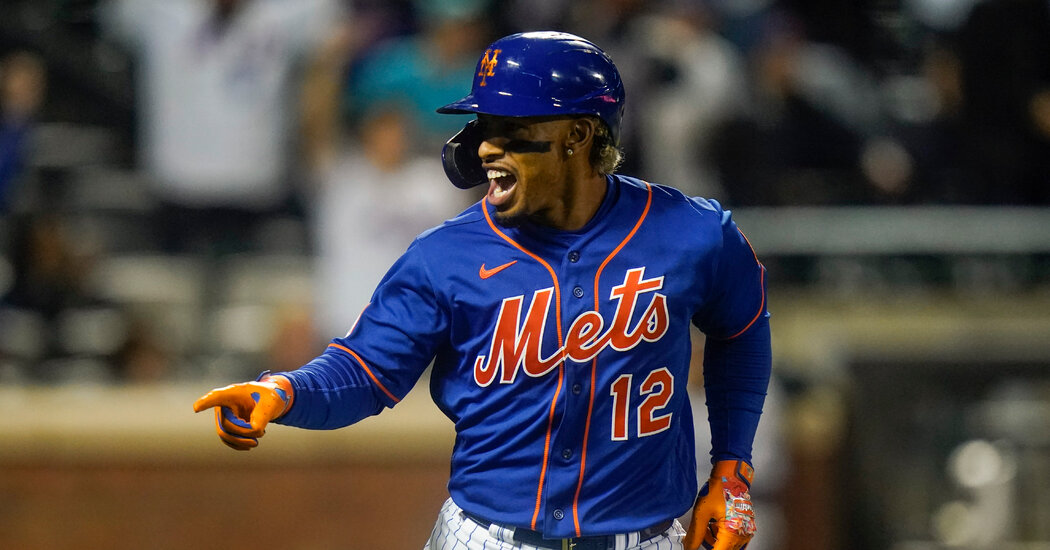 At the Mets’ Home Finale, Change Was in the Air

The Mets played their last home game of the season on Thursday in the final hours of September. It was dark at game time, and the flags flapped atop Citi Field in the cool breeze. Most of the players did not wear long sleeves, but most of the fans bundled up. Summer is over.

Plenty of loyalists showed up to see the team off — 24,312 for a midweek night game with the Miami Marlins, another also-ran in the National League East. The Mets ruled the division for most of the season, but crashed hard. They are the first team to spend more than 100 days in first place yet finish with a losing record. It is a lot to process.

“There’s a lot of positive things that happened,” Pete Alonso said, in the home dugout after batting practice. “But I’m going to need some time to reflect on the lessons and the things I need to do to take this team to the top. Because I love being a Met. I really love this organization and I love this fan base. But I hate to lose.”

This game was a laugher for the Mets, 12-3, and the Marlins’ backup catcher was pitching at the end. Alonso ripped two homers, Nos. 36 and 37 for the season, and was robbed of another at the center field wall. Francisco Lindor smoked a grand slam and Michael Conforto lashed two run-scoring singles. Rich Hill, the hard-luck lefty acquired in July, finally got his first Mets victory.

Conforto, who can be a free agent after the season, might have played his last home game as a Met. He found himself holding back tears in right field.

“Fans out there cheering my name, telling me, ‘Don’t go,’” Conforto said, listing the moments, on and off the field, that endeared New York to him. “We’ll see what happens in the future, but I loved every second that I was blessed to play here.”

Conforto, 28, is the only position player left from the Mets’ roster in the 2015 World Series. Remember his brief star turn in Game 4? Conforto homered twice against Kansas City, and it looked like the Mets would tie the series. Instead they fumbled the lead in the late innings and lost the World Series the next night. They have not won a postseason game since.

How close are the Mets, really, to playing games that matter in October? That is a question for the next president of baseball operations to solve, and the Mets cannot afford to bungle another job search.

Their new owner, Steven Cohen, hired Jared Porter as general manager last off-season, with Zack Scott as his assistant. Porter was fired in January for sending lewd text messages to a female reporter, and Scott has been on administrative leave since he was arrested on Aug. 31 and charged with driving while intoxicated. In an era of expansive front offices, Sandy Alderson, the team president, has been badly undermanned.

“Sandy’s doing three jobs at this point,” reliever Trevor May said on Thursday. “More people are going to come in and probably carve off pieces of what was one job, and it’s going to become three people doing three jobs again, so communication can be higher.

“You notice that so many organizations have their G.M.s, but they also have president of baseball operations, assistant G.M.s — all the different little branches, but they all kind of do G.M. duties now. So you can go to them with stuff that you would take to the G.M. in 2012 when it was just one guy. That’s just the way it’s happening now: a lot more brains tackling bigger problems.”

Alderson, 73, could chase a famous executive like Billy Beane or Theo Epstein, or try again to find a protégé to build on his ideas, as Beane did when he was Alderson’s assistant in Oakland in the 1990s. Last year’s hiring fiasco aside, Alderson should have appealing options.

“I’m selling Steve Cohen, I’m selling New York, I’m selling the opportunity to realize the potential of a storied but not yet iconic franchise,” Alderson told reporters on Wednesday. “I think there’s a tremendous amount to offer someone coming to the Mets. Is it a set piece? Is it something that doesn’t require a certain amount of work? No. That’s where the real enjoyment comes in, is creating something.”

The mystery executive will have a head start: an elite slugger, Alonso, with three years to go before free agency; a dominant (if fragile) starter, Jacob deGrom, with up to three years left on his contract; and a 27-year-old shortstop, Francisco Lindor, with 10 years left on his — and, yes, that’s a good thing.

As awkward as his transition has been to New York, Lindor is a star who will finish this season on a high; Thursday’s slam gave him nine home runs and 25 R.B.I. for September. His pal Javier Baez, 28, has also shown the Mets his best side with free agency coming up.

Before the Mets address Baez’s future, or that of their other top free agents — Conforto and starters Marcus Stroman and Noah Syndergaard — they will first decide whether to keep Manager Luis Rojas, who has gone 102-117 in two seasons.

The Mets fired their hitting coaches in May but still never quite fixed the offense. Only three teams — Miami, Texas and Pittsburgh — have scored fewer runs. Hitters chased too many bad pitches, Rojas said, failing at “all those things that I know those players came through our system knowing and mastering.”

Rojas, 40, was a longtime, well-respected manager in the Mets’ farm system before his promotion, and it would be a shame to lose someone who helped the team reliably develop solid major leaguers. He will know his fate within days.

“We have to get there first and find out what’s going to happen, but I’ve enjoyed my time here the last two years being the manager,” Rojas said. “It’s been fun every day working with the guys and connecting with them and preparing. We haven’t achieved what we wanted to achieve, but the atmosphere in the clubhouse, for me, has been one of the most important things that I can think of the past two years here, in how everybody gets along and gets prepared to play.”

Alas, in the cold calculation of a season gone wrong, results almost always matter most. The Mets may soon have new leaders in the dugout and the front office, but the core of a winner is here — Alonso, deGrom and Lindor — and that is more than most losing teams have.

Lindor was the last Met to leave the field on Thursday, signing autographs for a hundred or so die-hards near the dugout who had stayed for a final salute. A lot may be different by the next home game, in six months, but for now, Lindor had a simple message for the fans.

“Sorry we couldn’t get it done for them,” he said, “but I appreciate the love they have given all of us.”

Denial of responsibility! TechiLive.in is an automatic aggregator around the global media. All the content are available free on Internet. We have just arranged it in one platform for educational purpose only. In each content, the hyperlink to the primary source is specified. All trademarks belong to their rightful owners, all materials to their authors. If you are the owner of the content and do not want us to publish your materials on our website, please contact us by email – [email protected]. The content will be deleted within 24 hours.
airchangeFinalehomeMetsnews updatesports newssports update
Share

Their Future Was Written on the Calendar

The Strange Allure of Pool-Cleaning Videos