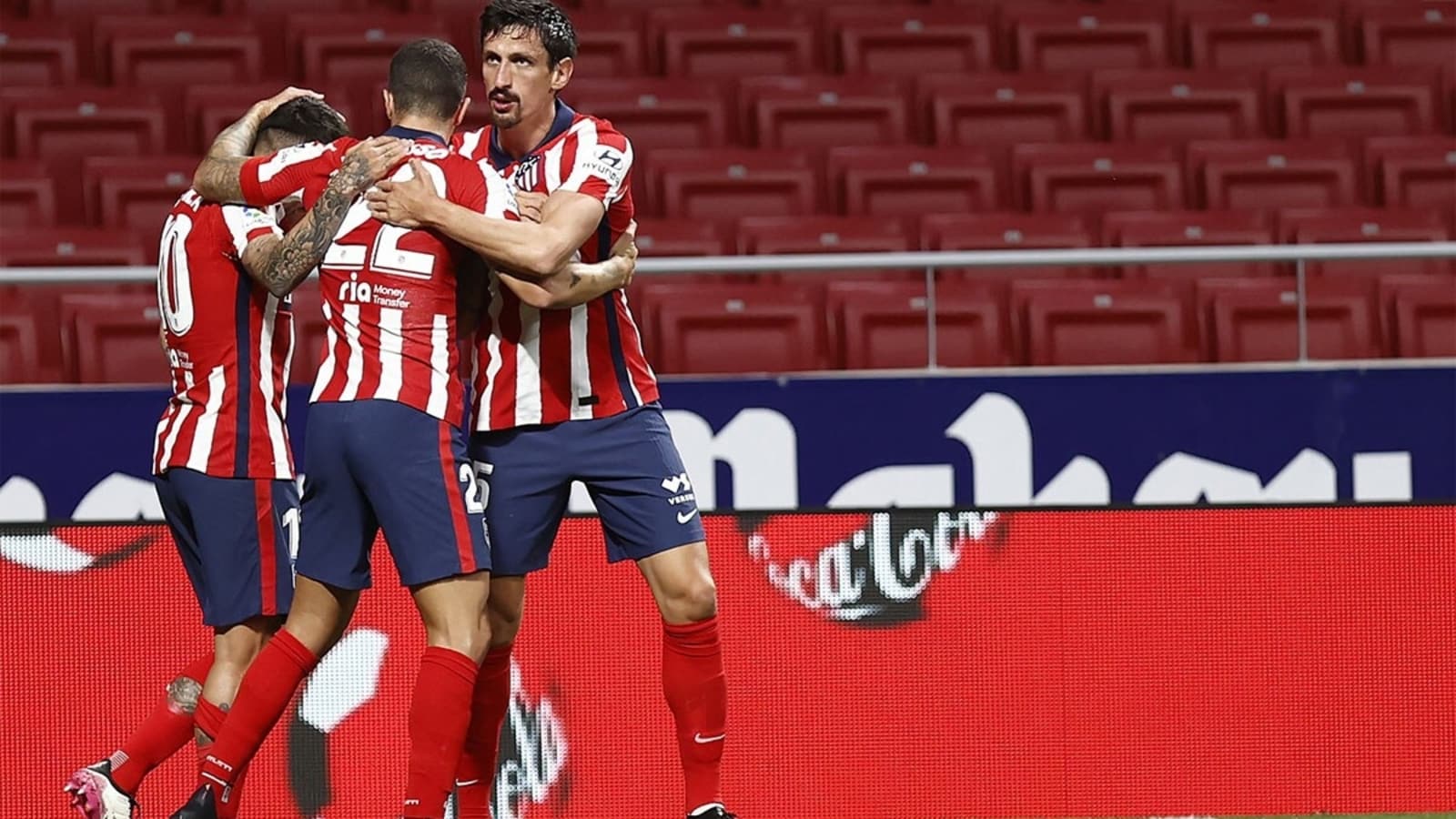 With the Spanish league title in sight, Atlético Madrid made sure it didn’t falter. Gritty and determined, Diego Simeone’s team moved closer to ending its title drought in Spain with a 2-1 home win against Real Sociedad on Wednesday, taking a major step toward securing its first league trophy since 2014.

Simeone punched the air as he raced from the bench to the tunnel after the final whistle, and some of the hundreds of fans who supported the team from outside the Wanda Metropolitano Stadium set off fireworks to celebrate the crucial win.

“We could hear them,” said Atlético captain Koke Resurrección, who played his 500th match for the club. “There are two games left but that’s a lot. Everyone is losing points in this league. We have two finals ahead of us.”

Yannick Carrasco and Ángel Correa scored a goal each in the first half and Atlético held on after conceding late to open a four-point lead over Barcelona with two rounds to go. The Catalan club had stumbled again on Tuesday, being held to a 3-3 draw at Levante to see its title chances dwindle.

Atlético is five points ahead of Real Madrid, which can get back within two points if it wins at Granada on Thursday. If Madrid draws or loses, a home victory on Sunday against 11th-place Osasuna will be enough to give Atlético the league title after a seven-year wait.

Atlético supporters will have to remain outside the Metropolitano for the possible title-clincher on Sunday as only some regions in Spain will be allowed to have limited crowds in stadiums, the government said earlier on Wednesday.

“I know it’s difficult for everyone, but soccer needs the fans,” Simeone said.

Fourth-place Sevilla was dropped from title contention despite a 1-0 win against Valencia at home earlier on Wednesday. It was six points from Atlético, which has the edge in the head-to-head tiebreaker.

Madrid has the tiebreaker advantage over both of its rivals, while Atlético has the edge in case of a tie with Barcelona. The match against fifth-place Sociedad was perhaps Atlético’s most difficult challenge in the last few rounds. After hosting Osasuna, it finishes at relegation-threatened Valladolid.

Atlético has been in the lead for most of the season. It got off to a fast start and was on pace for a 100-point campaign before faltering toward the end and allowing Barcelona, Madrid and Sevilla to move closer.

Atlético came out attacking from the start at the Metropolitano, giving little space for Sociedad. Luis Suárez and Marcos Llorente both missed clear chances early before Carrasco opened the scoring with a 16th-minute shot from inside the area that went between the legs of Sociedad goalkeeper Álex Remiro.

Suárez, who has been key for Atlético after being let go by Barcelona last season, set up Correa’s 28th-minute goal from inside the area with a nice through ball past defenders. Sociedad, still fighting for a Europa League spot, pulled closer through Igor Zubeldia from close range after a corner in the 83rd and pressed for an equalizer until the end. The Basque Country club had already hit the post twice.

Celta Vigo defeated Getafe 1-0 to stay in eighth place and maintain a shot at qualifying for the Europa League next season. Getafe remained in danger of demotion, sitting three points from the relegation zone. Huesca, meanwhile, moved out of the relegation zone with a 1-0 win over Athletic Bilbao, staying two points clear of danger.

Denial of responsibility! TechiLive.in is an automatic aggregator around the global media. All the content are available free on Internet. We have just arranged it in one platform for educational purpose only. In each content, the hyperlink to the primary source is specified. All trademarks belong to their rightful owners, all materials to their authors. If you are the owner of the content and do not want us to publish your materials on our website, please contact us by email – [email protected]. The content will be deleted within 24 hours.
Loading...
AtleticoAtletico MadridBeatcloserLa Ligmovesnews updateSociedad
0
Share

CISOs weathered the pandemic well, but at personal cost