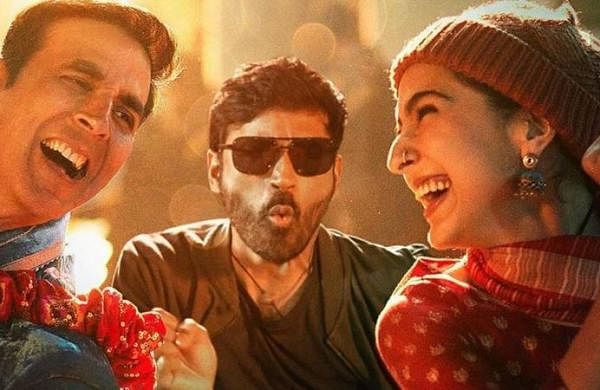 Towards the intermission point in Atrangi Re, there is a big reveal, the response to which determines the audience’s acceptance of the latest Aanand L Rai film. We see Akshay Kumar’s Sajjad priming his horns to play the antagonist of sorts in the star-crossed love story of Vishu (Dhanush) and Rinku (Sara Ali Khan).

Akshay is visibly revelling in the idea of playing this OTT character, and beside him, we see a beaming Sara feeling the same, and we cut away to a bathroom stall where Dhanush invokes the Raanjhanaa title song and performs a quick dance. Basically, despite the ludicrousness of the central premise, all three actors have their versions of fun on screen. But there is only so much that spirited performances and a brilliant score can do when the writing is messy and all over the place.

Atrangi Re begins with a forced marriage between Rinku and Vishu. While Rinku is forced into marriage because she is forever trying to elope with the love of her life Sajjad, Vishu finds himself at the wrong place at the wrong time as he becomes victim to the now-infamous groom kidnapping in certain Indian states.

There is an unnecessary sense of urgency in the first few minutes of the film, and before things can even come to a much-needed pause, we are asked to take a leap of faith about Vishu harbouring feelings for Rinku.

Come on! Even Dhanush’s exceptional histrionics in that “love proposal” scene can’t really fill in for the shallowness of the proceedings. Unlike the writing in Ranjhanaa, which gave us a sense of why Kundan was head-over-heels in love with Zoya, here we don’t really know what makes Vishu like Rinku.

Like, of course, she has a lot of spunk and a serious non-understanding of time, space, and privacy, which makes her the stuff of dreams for many of our heroes. However, Vishu’s transition from being plain irritated at her to becoming all doe-eyed around her is painfully coercive.

This weirdly magical journey is elevated by one of AR Rahman’s recent best works. Although a bulk of the songs are used to hasten the narrative of the first half, it is only with the power of this music that we embark on this middling journey. Also special mention to Pankaj Kumar’s colourful visuals that give Atrangi Re an almost fairytale-ish feel to it.

But one can not just shake off that feeling of incompleteness that stems from Atrangi Re’s writing choices. Of course, there is that “twist” that, well. isn’t as convoluted as the makers deem it to be. And when their ONE trump card isn’t groundbreaking enough, Atrangi Re ran the risk of becoming saddled with fatigue and it does so in an emphatic fashion.

For all its chest-thumping on inventiveness and refreshing outlook at the time-tested narrative of the vagaries of love, Atrangi Re doesn’t quite deliver on what was promised.

It actually feeds into stereotypes rather than break them, or at least skirt around them. While it is smart how Dhanush is cast as a doctor in this film, the use of his, and his friends’ medical expertise is milked for easy but unsmart laughs. Another unsmart thing is definitely how Rinku’s character arc develops.

Although Sara is earnest as Rinku, the role turns out to be too gimmicky for a film of this potential. However, the more underwritten part is that of Akshay Kumar, and despite a cherubic and upbeat performance, Sajjad doesn’t quite create the intentioned flutter.

Just like every Himanshu Sharma-Aanand L Rai collaboration, Atrangi Re too deals with an all-encompassing love that crosses all physical and mental boundaries. Just like all their films, the concept too is a fascinating one even if it borders on the old-fashioned.

However, despite a solid cast, brilliant music, and spectacular visuals, this time around the successful collaboration misses the target by quite a distance.

Just proclaiming the film is “funnily weird” isn’t enough if it takes itself too seriously, and being neither funny nor weird, Atrangi Re settles down in a space that is just well… plain. And that’s the worst thing that can happen to a world created by one of our most maverick writer-filmmaker duos.

Denial of responsibility! TechiLive.in is an automatic aggregator around the global media. All the content are available free on Internet. We have just arranged it in one platform for educational purpose only. In each content, the hyperlink to the primary source is specified. All trademarks belong to their rightful owners, all materials to their authors. If you are the owner of the content and do not want us to publish your materials on our website, please contact us by email – [email protected]. The content will be deleted within 24 hours.
Aanand L RaiAkshay KumarAtrangiatrangi reatrangi re reviewdhanushentertainment newsEntertainment update
Share

‘Skills are the new oil’: Why resumes are on the way out