Notice: amp_is_available was called incorrectly. `amp_is_available()` (or `amp_is_request()`, formerly `is_amp_endpoint()`) was called too early and so it will not work properly. WordPress is currently doing the `pre_get_posts` hook. Calling this function before the `wp` action means it will not have access to `WP_Query` and the queried object to determine if it is an AMP response, thus neither the `amp_skip_post()` filter nor the AMP enabled toggle will be considered. It appears the theme with slug `publisher` is responsible; please contact the author. Please see Debugging in WordPress for more information. (This message was added in version 2.0.0.) in /home/runcloud/webapps/techilive/wp-includes/functions.php on line 5313
 Audi’s S5 Sportback is back with more than a facelift - TechiLive.in 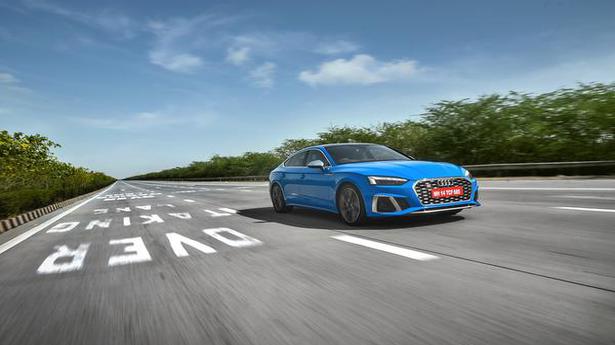 Audi’s S5 Sportback is back with more than a facelift

It was back in 2012 when Audi first introduced Indian buyers to the concept of a mid-range performance car with the old S4. That was replaced by the first-gen S5 Sportback with the second-gen model arriving on our shores in 2017. Now the S5 Sportback is back in its facelifted guise. So what is it like?

It is amazing how a few small, relatively inexpensive additions to the exterior have transformed the visual character of the S5 Sportback.

This Turbo Blue paint shade is certainly a big contributor, but what also helps are the new LED headlamps and tail-lamps, the pointier bumpers with swollen brushed silver accents, and a grille that is now accented with silver ‘studs’ rather than traditional horizontal slats. Furthering this sporty cause are the aggressive five-spoke, 19-inch alloys which fill out the wheel arches nicely, and the S models’ trademark silver wing mirrors and quad tailpipes.

Moreover, since this is a CBU import, the ride height has not been raised for India, and what you get is a nice wide stance with enough ground clearance for our roads.

Moving to the cabin, the biggest change is to the infotainment display — a large free-standing 10.1-inch display with a touchscreen interface. Though overall dash design is still shared with the A4, there is no denying its clean sophistication. Another highlight of the S5 is the upholstery with a mix of leather and Alcantara adding to the ‘S’ ambience.

Quality, ever an Audi highlight, is near impossible to fault. There is, as before, a flat-bottom ‘S’ steering wheel and Audi Virtual Cockpit digital dials, but this screen-based instrumentation is of the new generation and much crisper looking.

On the features front, you are well covered and there is also an optional kit available that provides a heads-up display, a Bang & Olufsen sound system and a parking assistant.

The one thing that has not changed at all is the powertrain. The 354hp, 3.0-litre turbocharged V6 and eight-speed torque-converter automatic are well met, and there isQuattro AWD with a 40:60 front-to-rear split for the 500Nm of torque. In Dynamic mode, the S5 deploys its performance with a ruthless efficiency we expect from sporty Audis. While there is no launch control, it shoots off the line ferociously enough to achieve the claimed 4.8sec 0-100kph time.

It roars through its rev band with your right foot pressed down. What is interesting is that though the shifts are quick, they are not the aggressive headbutts you get in an RS5, which makes sense in this car. However, the S5 also shines when you knock it down to Comfort mode; it is refined, smooth and very easy to pilot. It even rides surprisingly well; the base suspension is just that comfy, although you might hear a thud in protest from those 19-inch wheels if you hit a bump too fast.

Handling is classic Audi, with the Quattro system giving it an unflinching grip on the road no matter how hard you push around corners. There is quite a lot of understeer too, but this is understandable in something that is not a full-on sportscar. The steering is quick enough to elicit agile direction changes.

The S5 is accessible, even for first-time performance car buyers. And when you are not tearing up the tarmac, it is a serene luxury experience.

The CBU imported S5’s price of ₹79.06 lakh (ex-showroom) is not easy to overlook. But it packs in plenty of performance and errs more on the side of usability. Perhaps its biggest standout quality is its stunning looks, and because it does not have a lesser counterpart in the range, it won’t be mistaken for anything else.

Loading...
Denial of responsibility! TechiLive.in is an automatic aggregator around the global media. All the content are available free on Internet. We have just arranged it in one platform for educational purpose only. In each content, the hyperlink to the primary source is specified. All trademarks belong to their rightful owners, all materials to their authors. If you are the owner of the content and do not want us to publish your materials on our website, please contact us by email – admin@techilive.in. The content will be deleted within 24 hours.
AudisAuidfaceliftlifestyle newslifestyle updatenews updateS5 SportbackSportback
0
Share

Sharks use Earth’s magnetic field as a GPS, scientists say