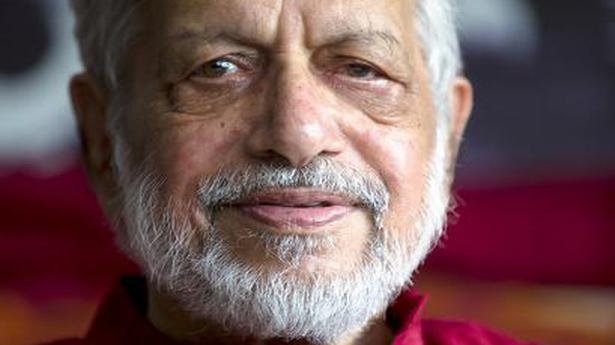 Avinash Pasricha’s life behind the lens

The celebrated Avinash Pasricha is showcasing some rare photographs from his enviable collection of two generations of musicians and dancers at the Museo Camera Centre in Gurugram. The exhibition is on till November 22. With one of the finest collections in the country, Avinash is a familiar figure at cultural events in Delhi, and shoots even today, if only on his cell phone.

The black and white photographs in the show range from artistes in concert to intimate family shots (the one of Kumar Gandharva with his tanpura at home is particularly evocative). He has also made audio visual films on various artistes, including Begum Akhtar, Madhavi Mudgal and Kumar Gandharva.

Walking me through the retrospective, the affable photographer says, “I began taking pictures of artistes at Sapru House during the Vishnu Digambar Jayanti music festival in 1966. Frankly, I had no ear for music then (even now my wife focusses on the music more than me) but the ability to capture emotions on film fascinated me. We used cameras with flash then; live stage photography was not really known in India . I was probably the first to start it. A new technique called acufine, which increases the speed of developing a film by three times, is what I used if there was sufficient light to capture the different moods of the musicians.”

Avinash recalled a festival where he heard Prabha Atre and Padma Maudgalya sing, and used up four rolls of film. “They are still with me; precious reminders of my long journey behind the lens,” he says. “Madhavi Mudgal used to perform three dance styles those days; later she confined herself to Odissi. She encouraged me in my quest to shoot dancers in motion.”

Pausing in front of a photograph, Avinash says, “For me, the aim is to capture the mood of the artiste. I always concentrate on the visual. If I can capture a moment of bliss for an artiste, that for me is the perfect picture.”

Talking about the physical constraints of his art, he explains, “Nowadays with digital cameras one can do more. I started using them in 2006, but I still haven’t got the hang of getting that right shot; maybe the camera I use is not sufficiently high end. I find that split-second delay between the look I want and the click; it is frustrating. Of course, with years of viewing through the lens, one knows that the look will be repeated during the concert. One has to focus really hard to capture the ever-changing facial expressions, movements and hand gestures.” With musicians, he says, there is much less to capture. He also finds the mic obstructive.

Though it is difficult for him to choose his favourite photograph from the vast collection, he points to the picture of Bharatanatyam dancer Malavika Sarukkai at Khajuraho. “I remember I nearly fell off; there was no space from the angle where I was trying to click. I wanted to get more of the monument. See this one of Rama Vaidyanathan. It seems like the focus is on the mudra, but I was looking only at her eyes ”

Talking about the beautiful shot of the inimitable Balasaraswati on display, he says, “I was invited by the organiser Ghulam Naqshband to shoot the performance. I had barely clicked six to seven photos, when dancer Indrani Rehman came up to me and forbade me from photographing. She said Bala wanted me to stop. I felt very bad and left the performance. Much later I went to her home in Chennai to photograph her. That too was not a success. The only good photo I got then was of Bala with her grandmother as she was walking out of the house, which has been used by several publications.”

Avinash has always enjoyed photographing Chitra Visweswaran’s lovely expressions. And it shows in one of the striking portraits on display.

His most cherished memory is of photographing M.S. Subbulakshmi singing in the lawns of Rabindra Bhawan at Sangeet Natak Akademi after receiving an award. “I think one could feel the bhakti she conveyed when singing.” During an exhibition in Chennai, he recalls visiting her house where she not only sang for him and his wife but also served them dosas.

Among Hindustani musicians, Avinash feels some of his finest shots are of Bhimsen Joshi. He remembers taking a picture of Ustad Amir Khan just once, in Delhi. Bismillah Khan too was wonderful to shoot, as was Asad Ali Khan. “My best shot was of him lying on the floor with the huge tumba of his rudra veena; it’s an unusual shot. No, that’s not part of the exhibition. My son, Veenu, selected the photos on display here since I found it too hard to choose,” he laughs.

Avinash prefers to shoot when the artistes are performing. “I don’t really like studio photography. The artiste is too tense waiting for the shot,” he says. But he has shot many artistes such as Ravi Shankar and Amjad Ali Khan in their homes. The most satisfying moments of his life, says the octogenarian, have been with his camera.

writes on art and culture.

Denial of responsibility! TechiLive.in is an automatic aggregator around the global media. All the content are available free on Internet. We have just arranged it in one platform for educational purpose only. In each content, the hyperlink to the primary source is specified. All trademarks belong to their rightful owners, all materials to their authors. If you are the owner of the content and do not want us to publish your materials on our website, please contact us by email – [email protected]. The content will be deleted within 24 hours.
AvinashAvinash Pasrichaentertainment newsEntertainment updateLenslifenews updatePasrichas
Share

Alibaba takes in $84.54 billion in orders in toned-down Singles Day