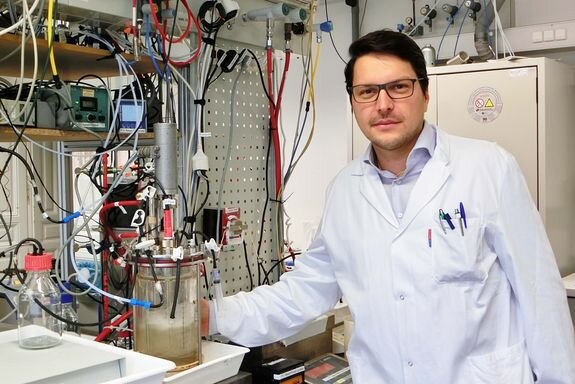 To establish a carbon-neutral circular economy in the future, technologies are needed that use carbon dioxide as a raw material. In the form of formate, CO2 can be metabolized by certain bacteria.

Acetogens are a group of bacteria that can metabolize formate. For example, they form acetic acid—an important basic chemical. If these bacteria were manipulated to produce ethanol or lactic acid, a comprehensive circular economy for the greenhouse gas CO2 could be realized. To ensure that the process is sustainable, the CO2 is extracted directly from the air and converted to formate using renewable energy.

To find out how exactly formate can be utilized by the Acetobacterium woodii (short: A. woodii), a team led by Stefan Pflügl from the Institute of Chemical, Environmental and Bioscience Engineering at TU Wien investigated how the bacterium metabolizes various substrates—including formate. Furthermore, the researchers used a metabolic model to study how A. woodii could be genetically modified to produce substances other than acetic acid.

“The economy of the future must be carbon neutral,” demands Stefan Pflügl. However, since carbon is an important component of many products—such as fuel or plastics—the existing CO2 should be recycled and returned to the cycle. One climate-neutral way to do this is capture CO2 directly from the air and convert it into formate with the help of renewable energy. This compound of carbon, oxygen and hydrogen can ultimately be a basic building block of the bioeconomy. The advantages of formate are that it is easy to transport and can be used flexibly for the production of chemicals and fuels. These substances can be produced with the help of acetogenic bacteria that feed on carbon compounds and produce acetic acid from them.

Formate recycling by A. woodii

In order to use acetogens for the production of raw materials, one needs to understand their metabolism and physiology. Although A. woodii is a model organism, meaning that the bacterium has already been extensively studied, the research team wanted to make a comparative observation. Thus, Stefan Pflügl and his team investigated how substrates such as formate, hydrogen, carbon monoxide, carbon dioxide or fructose affect the metabolism of A. woodii.

“The biggest difference, caused by the different substrates, is the amount of energy that A. woodii gains,” observes Stefan Pflügl. He explains this as follows: “Acetogens are true survival artists that can also metabolize substrates such as CO, CO2 or formate. This is due to the fact that acetogens use what is probably the oldest metabolic pathway for CO2 fixation. Thus, they also manage to produce enough energy to survive under extreme conditions and from alternative food sources.”

This means that acetogens are not only able to utilize CO2 but also do so very efficiently. Consequently, only little energy needs to be expended to convert CO2 into formate, which is then converted into the basic chemical acetic acid.

To exploit the full potential of A. woodii, the researchers also investigated how the bacterium can be genetically modified to produce ethanol or lactic acid instead of acetic acid. While ethanol forms the basis for fuel, lactic acid can be used to produce biodegradable plastics. Oil-based substances could consequently be replaced by more sustainable alternatives. “Not only would this be in the sense of the bioeconomy, but CO2 and carbon monoxide, which are produced during the combustion of fuel or plastic, could also be recycled to the original product,” Stefan Pflügl envisages.

The study, which has been published in the journal Metabolic Engineering, thus provides insights into what acetogens like A. woodii can do under certain conditions. Based on the experimental data and using a model, the researchers also developed strategies on how A. woodii can be genetically manipulated and used for the production of other substances.

Denial of responsibility! TechiLive.in is an automatic aggregator around the global media. All the content are available free on Internet. We have just arranged it in one platform for educational purpose only. In each content, the hyperlink to the primary source is specified. All trademarks belong to their rightful owners, all materials to their authors. If you are the owner of the content and do not want us to publish your materials on our website, please contact us by email – [email protected]. The content will be deleted within 24 hours.
BacteriaClimategadget updateHeroestech newstech updatetechi live
Share