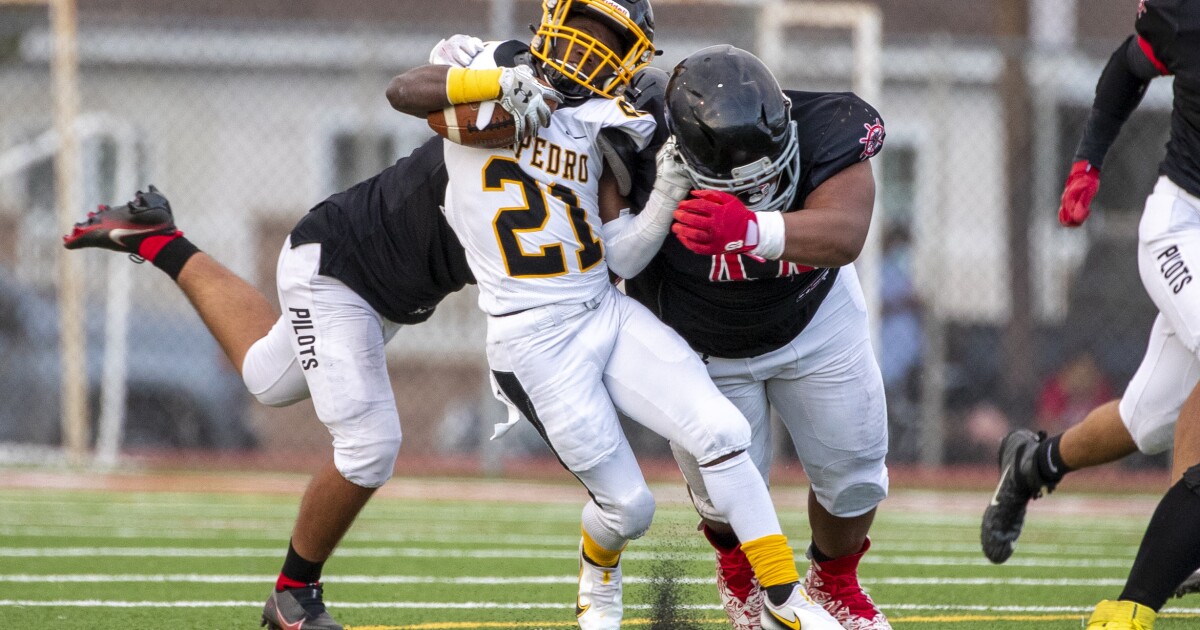 It’s called the “heavy” offense when Wilmington Banning puts 275-pound Luke Ahkiong at fullback with 225-pound Jakob Galloway and 6-foot-3, 225-pound Seth Fao side by side at running back. They’re all Samoans who love hitting and running over people.

“Galloway is a monster,” Fao said. “Luke, once something gets in his way, he’s not stopping.”

The three combined with sophomore quarterback Andrew Devoe to put on a show in a 38-13 victory over host Peninsula on Thursday afternoon as wind and clouds rolled in and out of Rolling Hills Estates.

Fao ran for 78 yards and a touchdown. Galloway ran for a touchdown and had a touchdown catch while gaining 83 yards in 17 carries despite little practice over the last three weeks because of COVID-19 protocols. Ahkiong had two sacks and ran for a touchdown. Devoe, taking advantage of Peninsula’s focus on stopping Banning’s running game, completed all five of his passes for 109 yards. Banning (2-0) also successfully made a two-point conversion on four of five attempts.

The Pilots have benefited from the return of several players to the community after attending other schools. Fao, whose two older brothers were standout football players at Banning, transferred from Anaheim Servite.

“It feels good to be home and representing the Pilots,” he said.

Other players have returned from Carson and two players came from Rancho Dominguez when that school decided not to have a team this season. The Pilots recorded seven sacks and received a 55-yard interception return for a touchdown from Anthony Jauregui.

Fao and Galloway are going to be a strong duo on both sides of the ball if they can stay healthy. Fao had a 42-yard reception and threw a 39-yard touchdown pass to Galloway, who also played linebacker.

Galloway, an All-City running back who has committed to San Jose State, started to gain momentum in the second half, carrying tacklers as he picked up yards.

“I wasn’t 100%,” Galloway said in a warning to opponents left on Banning’s schedule.

Banning is hoping to challenge San Pedro and Lake Balboa Birmingham for City Section supremacy, and there appears to be plenty of pieces to build around.

Denial of responsibility! TechiLive.in is an automatic aggregator around the global media. All the content are available free on Internet. We have just arranged it in one platform for educational purpose only. In each content, the hyperlink to the primary source is specified. All trademarks belong to their rightful owners, all materials to their authors. If you are the owner of the content and do not want us to publish your materials on our website, please contact us by email – [email protected]. The content will be deleted within 24 hours.
Banningflattengamenews updatePeninsulaPowerrunningsports news
Share