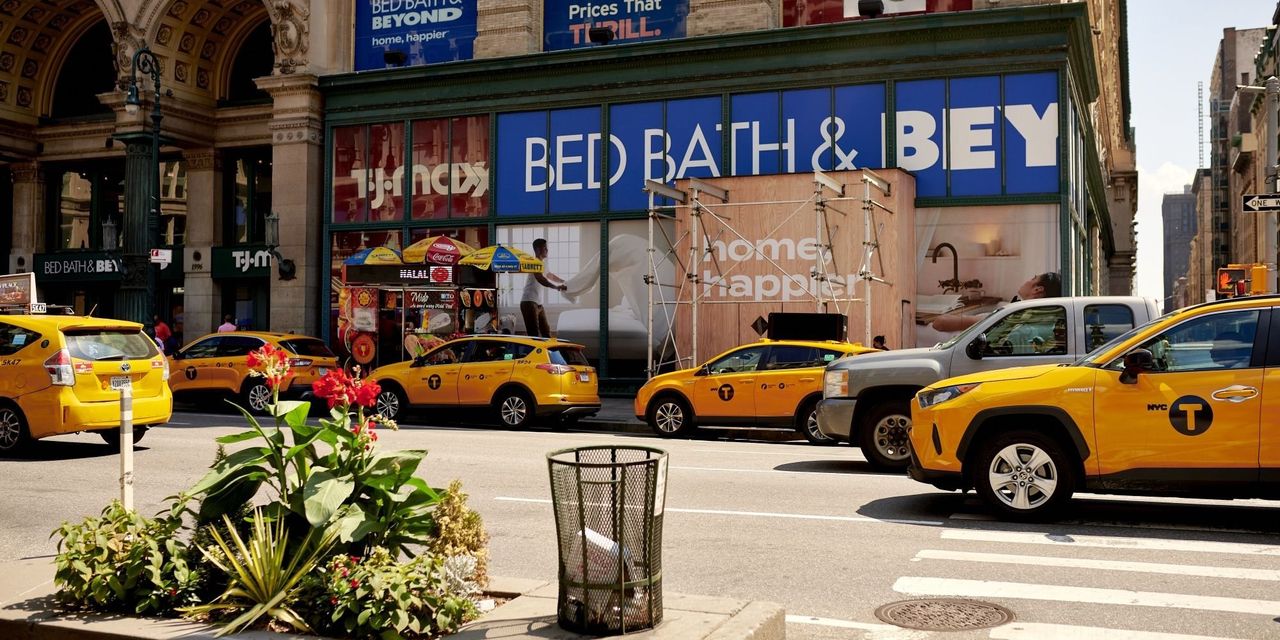 is gearing up for what could be a make-or-break holiday season as the company struggles to keep its stores stocked and win back shoppers.

More than 40% of the retailer’s products were out of stock in October, according to DataWeave Inc., an analytics company that tracked online availability of 150,000 items. That is nearly twice the level it was in the first half of the year, DataWeave said.

was recently browsing Bed Bath & Beyond’s website looking for closet organizers, slippers, a bathrobe and candles. “Every time I clicked on something, it was out of stock,” said Mr. Acosta, 38 years old, who lives in Homestead, Fla.

The home-goods retailer is attempting to reverse a steep sales slide, the result of a failed overhaul by prior management that replaced national brands with private-label goods. It has been trying to patch up relationships with suppliers by catching up on overdue payments and recently hosted a meeting with top vendors to plead for their continued support.

“There were some challenges under prior regimes, but I believe we are on a solid footing to repair the relationships,” Bed Bath & Beyond Chief Executive

said last month. “Our accounts payable are as clean as they have ever been.”

Some suppliers who spoke on the condition of anonymity said they are still owed money and have paused shipments to the retailer until they get paid. Some invoices are from as far back as January, these people said.

Bed Bath & Beyond buyers submit a priority list of vendors to the accounts-payable department each week, suggesting that the retailer is picking which suppliers to pay based on necessity, these people said.

“This is a very important holiday season for them,” said

the chief executive of Pulse Ratings, an independent credit-rating firm. “They are facing a lot of obstacles.”

The company, which also owns Buybuy Baby, is still grappling with empty shelves even as other retailers have largely moved past the supply-chain issues of the last two years, when the Covid-19 pandemic caused temporary factory closures and created shipping bottlenecks.

Bed Bath & Beyond had higher out-of-stock rates in October on comparable items than other retailers, including

Bed Bath & Beyond used to be one of

‘s first stops on Black Friday for deals on kitchen appliances, bedding and holiday gifts. Not this year. Ms. Quintanilla, a 64-year-old glass artist, recently visited a store near her home in Westlake Village, Calif., looking for storage bins and a comforter but was disappointed with the selection.

“They didn’t have any of the storage bins I needed,” Ms. Quintanilla said. “The shelves were fairly empty.” She said the store only had one brand of comforter—UGG. “They used to have so much variety,” she said.

tried to overhaul Bed Bath & Beyond by replacing name-brand goods with private-label items. It is a strategy that has worked well for other retailers. But it backfired at Bed Bath & Beyond, partly because the company lacked the infrastructure to design, manufacture and ship its house brands. Once the private-label brands arrived in stores, they fell flat with shoppers.

Bed Bath & Beyond is now reversing course. In August, it said it was discontinuing three of its nine private-label brands and reducing the assortment of the others. It is also trying to add back more goods from national brands such as Calphalon and OXO.

36, of Huntington Beach, Calf., tried to buy the water-treatment additive for her Venta humidifier, but it was out of stock—as were all Venta products on Bed Bath & Beyond’s website. Frustrated with the retailer, Ms. Hopper said she bought the item at a local supermarket instead.

Some national brands that were pushed aside to make room for Bed Bath & Beyond’s private-label goods said they are reluctant to increase production for the retailer, because they are uncertain about its financial position.

Are you planning to shop at Bed Bath & Beyond this holiday season? Why or why not? Join the conversation below.

Earlier this year, Bed Bath & Beyond had run so low on cash that it had to raise emergency funds, including more than $500 million in August. It is in the process of swapping debt for equity to help extend maturities and reduce interest expenses. It has also closed underperforming stores and laid off staff to cut costs.

Numerous senior executives have left the company since June, including its chief operating officer, chief stores officer and chief merchandising officer. Its chief financial officer died in September. Some of those positions have been filled by promoting existing employees, but the company’s ranks continue to thin. Earlier this month, Bed Bath & Beyond notified suppliers that two of its senior merchants are leaving the company, according to a memo reviewed by The Wall Street Journal.

Denial of responsibility! TechiLive.in is an automatic aggregator around the global media. All the content are available free on Internet. We have just arranged it in one platform for educational purpose only. In each content, the hyperlink to the primary source is specified. All trademarks belong to their rightful owners, all materials to their authors. If you are the owner of the content and do not want us to publish your materials on our website, please contact us by email – [email protected]. The content will be deleted within 24 hours.
BathBBBYbedBed Bath & BeyondblackBonnie Quintanillabusiness newsBusiness update
Share

Football Manager confessions – ‘I Tanked club after fight with owner’