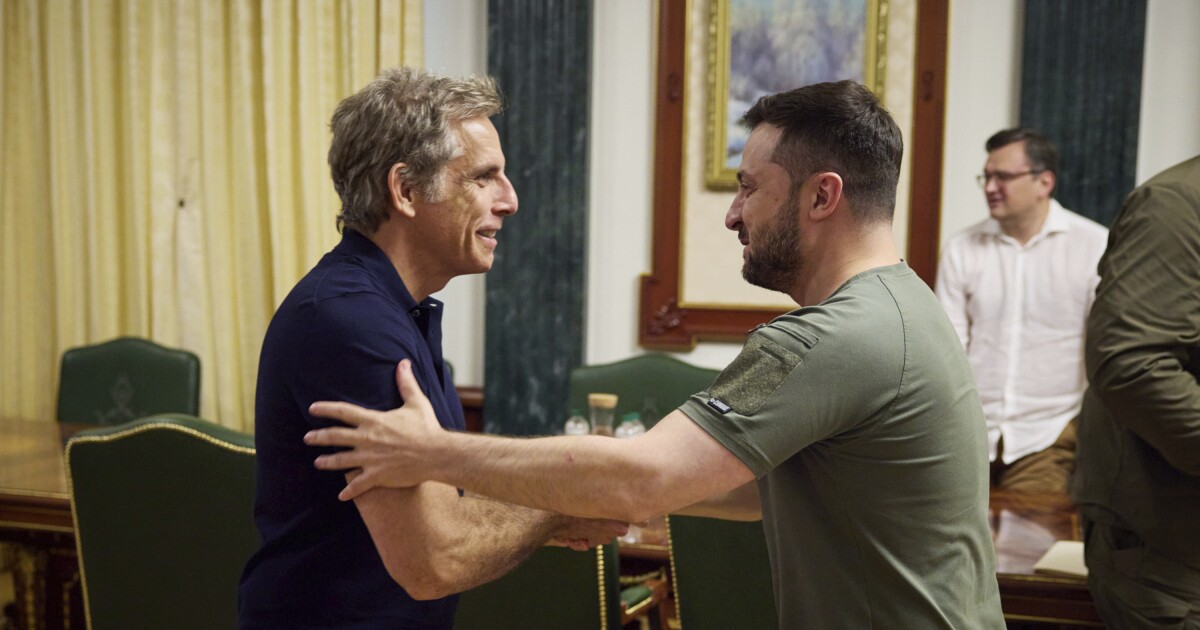 Ben Stiller is still processing the devastation he witnessed while visiting Kyiv, Ukraine, this week to meet with President Volodymyr Zelensky.

In a Tuesday interview with “BBC Breakfast,” the actor and director reflected solemnly on his trip to the besieged nation, which has been under attack from Russia since February. On Monday, Stiller spoke with Zelensky after spending time with survivors living in occupied settlements of the Kyiv region.

Stiller, an ambassador to the U.N. High Commissioner for Refugees, told the morning program that he had never entered “an area that’s in conflict” before his visit to Ukraine.

“It’s really strange, because when you drive into the … west of the country, you don’t feel the conflict, except for the curfew at night, where it gets very quiet and a little bit eerie,” he said.

“And then as you get closer and closer to Kyiv … you start to see the roadblocks and see the destruction, which is really shocking when you haven’t seen anything like that up close.”

During his appointment with Zelensky, Stiller hailed the Ukrainian leader as his “hero” and praised his “great acting career.” (Before taking office in real life, Zelensky portrayed a fictional president of Ukraine on TV, among other characters).

“Not so great as yours,” Zelensky quipped, to which Stiller laughed and replied, “No, but pretty great.”

“What you’ve done and the way that you’ve rallied your country, and for the world, it’s really inspiring,” he told Zelensky.

While appearing Tuesday on “BBC Breakfast,” Stiller said his first thought on seeing the wreckage in Ukraine was, “It looks like a movie,” but “the scale of it is even bigger, and it’s real, so that’s really distressing.

“The thing that gets me is these are just people like you and I who have been caught in a circumstance totally beyond their control.

“Nobody wants to flee from their home. Nobody wants to have to go out into the world and have to start afresh, or even just trying to find a way to survive.”

The “Night at the Museum” and “Zoolander” star also recounted a conversation he had with a Ukrainian mother of young twins who was forced to flee their family home amid rocket strikes.

“They went to the basement and had to wait till the sound of the rockets had gone away … and then not know where to even go for safety,” he said.

“You just try to place yourself in that situation, [and] think, ‘What would happen if a rocket came screaming by my apartment?’”

Denial of responsibility! TechiLive.in is an automatic aggregator around the global media. All the content are available free on Internet. We have just arranged it in one platform for educational purpose only. In each content, the hyperlink to the primary source is specified. All trademarks belong to their rightful owners, all materials to their authors. If you are the owner of the content and do not want us to publish your materials on our website, please contact us by email – [email protected]. The content will be deleted within 24 hours.
Bencallsdistressingentertainment newsEntertainment updateMeetingnews updateshocking
Share