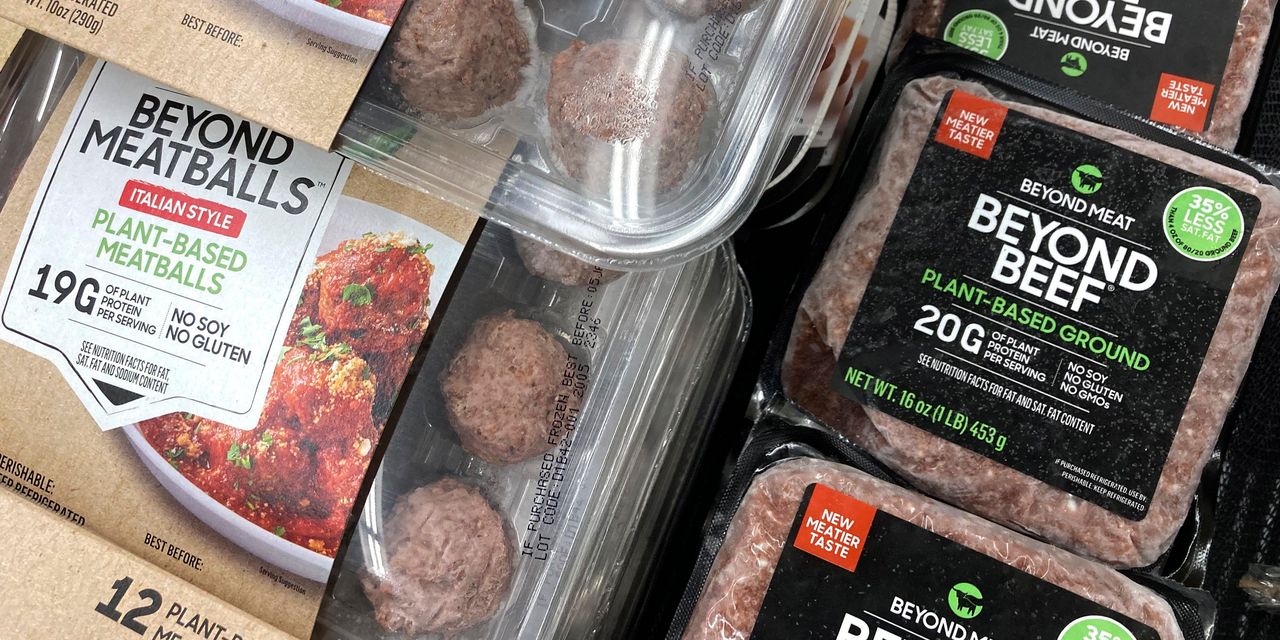 reported a wider-than-expected loss in its recently completed quarter because of higher spending, sending shares of the meat-alternative maker lower in after-hours trading.

said cost-intensive measures the company took to support strategic launches weighed on its bottom line. “We recognize that the decisions we are making today in support of our long-run ambition have contributed to challenging near-term results,” he said.

Production of the company’s jerky, which made its debut in U.S. grocery stores in March, was expensive and inefficient, said Phil Hardin, Beyond Meat’s financial chief, with some individual batches of jerky being processed across different facilities. Beyond Meat said its gross margin fell to 0.2% of sales in the latest quarter from 30.2% in the year-ago period, but that it expects margins to improve later this year.

Mr. Hardin said on the company’s conference call that Beyond Meat was reorienting the jerky’s production, consolidating operations and reducing related transportation costs.

Following the results, shares of Beyond Meat fell 22% in after-hours trading to $20.30, below the stock’s 2019 initial public offering price of $25. Through the close Wednesday, the stock is down 60% this year.

Beyond Meat recorded a loss of $100.5 million, or $1.58 a share, for the quarter ended April 2, compared with a loss of $27.3 million, or 43 cents a share, a year earlier. Analysts, on average, were expecting a loss of 98 cents a share. The El Segundo, Calif.-based company said its loss in the first quarter included $1 million in expenses related to early debt-extinguishment costs.

The latest results compound Beyond Meat’s recent struggles. The company reported a loss in February, citing weaker demand for its products in U.S. supermarkets that offset higher revenues from its international and U.S. food-service business.

Like other food makers, the company is battling inflation that is pushing consumers to buy staples in smaller quantities and switch to cheaper, store-name brands.

Beyond Meat said its U.S. retail sales increased 6.9% from a year earlier, helped by the introduction of its jerky product but hurt by lower sales for other products. International retail sales decreased due partially to list price reductions in the European Union and increased trade discounts, the company said.

The company said U.S. sales to restaurants and other food-service customers dropped 7.5% in the latest quarter after a customer discontinued distribution and Beyond Meat discounted products more heavily.

The company reaffirmed its previous guidance for 2022 but said issues such as inflation, the Covid-19 pandemic, labor availability and supply chain disruptions continue to affect operations.

—Jesse Newman contributed to this article.

Appeared in the May 12, 2022, print edition as ‘Beyond Meat Loss Exceeds Estimates.’

Denial of responsibility! TechiLive.in is an automatic aggregator around the global media. All the content are available free on Internet. We have just arranged it in one platform for educational purpose only. In each content, the hyperlink to the primary source is specified. All trademarks belong to their rightful owners, all materials to their authors. If you are the owner of the content and do not want us to publish your materials on our website, please contact us by email – [email protected]. The content will be deleted within 24 hours.
beveragesBeyond Meatbusiness newsBusiness updateBYNDC&E Exclusion FilterC&E Industry News FilterConsumer Goods
Share