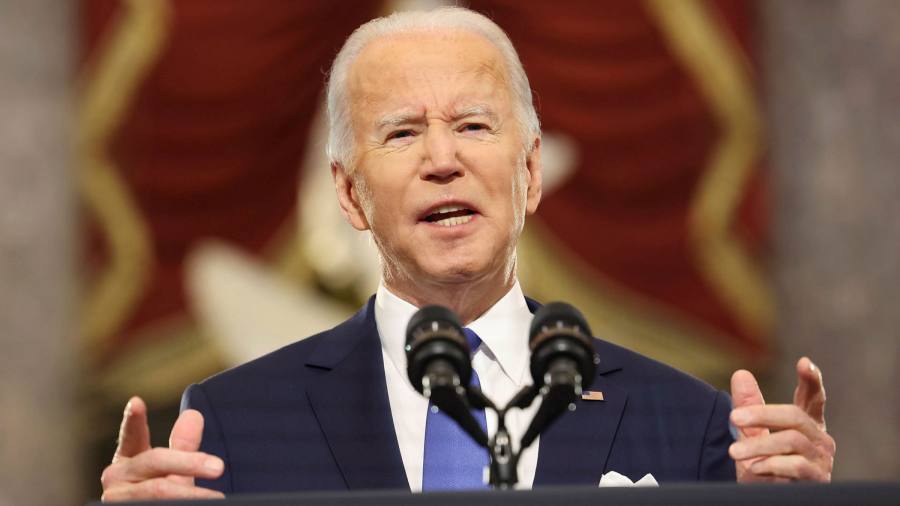 Joe Biden placed the blame for the January 6 attack squarely on Donald Trump at an event at the US Capitol on Thursday to commemorate the first anniversary of the siege.

In an emotionally charged address, Biden, who referred to Trump only as “the former president”, said his predecessor “values power over principle because he sees his own interest as more important than his country’s interest and America’s interest.

“His bruised ego matters more to him than our democracy or our Constitution,” the US president said.

Dismissing Trump’s claims that the 2020 election was “stolen”, Biden called on Americans to think seriously about the country’s democratic future.

Biden’s speech followed brief remarks from vice-president Kamala Harris at the start of a day of events on Capitol Hill to mark the anniversary of the attacks that left at least five people dead and hundreds more injured when mobs of Trump’s supporters stormed the complex in an attempt to stop the certification of Biden’s electoral college victory.

Trump was impeached by the House of Representatives on one count of inciting an insurrection, but acquitted following a Senate trial in which just seven Republican senators voted to convict him over his role in the attack.

Federal prosecutors in the District of Columbia have separately brought criminal charges against more than 725 people from nearly all 50 states in connection with the attacks. US attorney-general Merrick Garland vowed on Wednesday to hold January 6 perpetrators “at any level” to account, and indicated more charges may be still to come.

Trump has not faced criminal charges relating to January 6, but he is embroiled in a separate legal battle with a congressional committee probing his involvement in the riots. The former president has sued to block the release of records relating to the final days of his presidency, and his close ally Steve Bannon has been indicted for contempt of Congress after failing to comply with a subpoena issued by the committee.

“For the first time in our history, a president had not just lost an election: He tried to prevent the peaceful transfer of power as a violent mob breached the Capitol,” Biden said on Thursday. “But they failed.”

“I did not seek this fight brought to this Capitol one year ago today, but I will not shrink from it either,” the president added. “I will stand in this breach. I will defend this nation, and allow no one to place a dagger at the throat of democracy.”

No Republican leaders were expected to attend the events at the US Capitol on Thursday. Mitch McConnell, the Senate’s top Republican, was set to travel to Georgia to attend the funeral of the former Republican lawmaker Johnny Isakson. The House of Representatives is still on recess following the Christmas and New Year holidays, and most GOP lawmakers are not expected to return to Washington early to participate.

Trump was banned from all major social media platforms in the aftermath of the attack, and has largely kept a low profile since snubbing Biden’s inauguration last January. But the former president has continued to issue statements and endorse Republican congressional candidates through his Save America PAC, and has publicly toyed with another run for the White House in 2024.

On Thursday Trump issued a statement accusing Biden of “working hard to try and deflect the incompetent job he is doing”, adding: “That’s what you get when you have a rigged election.”

Trump had originally scheduled a press conference for Thursday at his Mar-a-Lago resort in an effort to counter the planned commemorations at the US Capitol. But he abandoned those plans on Tuesday, blaming the “fake news media” and saying he would “discuss many . . . important topics” at a rally later this month in Arizona.

The January 6 anniversary has put fresh scrutiny on corporate America’s response to the attacks, with activists drawing attention to companies that have resumed donations to Republican lawmakers who voted on the same day against certifying Biden’s election victory.

On Thursday the Business Roundtable, the leading voice for big company chief executives in Washington, reiterated its condemnation of the perpetrators of the attack “and the falsehood of an illegitimate 2020 presidential election”.

Denial of responsibility! TechiLive.in is an automatic aggregator around the global media. All the content are available free on Internet. We have just arranged it in one platform for educational purpose only. In each content, the hyperlink to the primary source is specified. All trademarks belong to their rightful owners, all materials to their authors. If you are the owner of the content and do not want us to publish your materials on our website, please contact us by email – [email protected]. The content will be deleted within 24 hours.
anniversaryBidenBlamesbusiness newsBusiness updateCapitolJanuarynews update
Share

Stewart Gilray, the founder of Just Add Water, dies at 51