Notice: amp_is_available was called incorrectly. `amp_is_available()` (or `amp_is_request()`, formerly `is_amp_endpoint()`) was called too early and so it will not work properly. WordPress is currently doing the `pre_get_posts` hook. Calling this function before the `wp` action means it will not have access to `WP_Query` and the queried object to determine if it is an AMP response, thus neither the `amp_skip_post()` filter nor the AMP enabled toggle will be considered. It appears the theme with slug `publisher` is responsible; please contact the author. Please see Debugging in WordPress for more information. (This message was added in version 2.0.0.) in /home/runcloud/webapps/techilive/wp-includes/functions.php on line 5313
 Biden to Propose $6 Trillion Budget to Make U.S. More Competitive - TechiLive.in 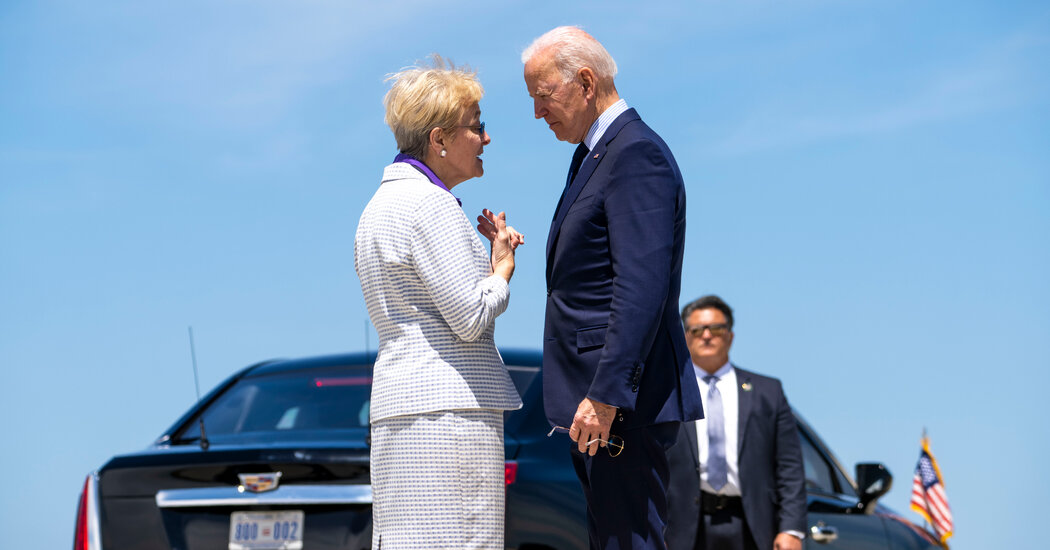 WASHINGTON — President Biden will propose a $6 trillion budget on Friday that would take the United States to its highest sustained levels of federal spending since World War II as he looks to fund a sweeping economic agenda that includes large new investments in education, transportation and fighting climate change.

Documents obtained by The New York Times show that the budget request, the first of Mr. Biden’s presidency, calls for total spending to rise to $8.2 trillion by 2031, with deficits running above $1.3 trillion throughout the next decade. The growth is driven by Mr. Biden’s two-part agenda to upgrade the nation’s infrastructure and substantially expand the social safety net, contained in his American Jobs Plan and American Families Plan, along with other planned increases in discretionary spending.

The proposal for the 2022 fiscal year and ensuing decade shows the sweep of Mr. Biden’s ambitions to wield government power to help more Americans attain the comforts of a middle-class life and to lift U.S. industry to better compete globally.

The levels of taxation and spending in Mr. Biden’s plans would expand the federal fiscal footprint to levels rarely seen in the postwar era to fund investments that his administration says are crucial to keeping America competitive. That includes money for roads, water pipes, broadband internet, electric vehicle charging stations and advanced manufacturing research. It also envisions funding for affordable child care, universal prekindergarten and a national paid leave program. Spending on national defense would also grow, though it would decline as a share of the economy.

Mr. Biden plans to fund his agenda by raising taxes on corporations and high earners and the documents show budget deficits shrinking in the 2030s. Administration officials have said the jobs and families plans would be fully offset by tax increases over the course of 15 years, which the budget request backs up.

Perhaps most notably, the documents forecast that Mr. Biden and Congress will allow tax cuts for low- and middle-income Americans, signed into law by President Donald J. Trump in 2017, to expire as scheduled in 2025. Mr. Biden has said he will not raise taxes on people earning less than $400,000 a year. It is possible that he could propose to extend the Trump tax cuts for those earners in a future budget, potentially coupled with additional tax increases on high earners or businesses.

While his plan estimates additional tax revenue down the line, the United States would run significant deficits as it borrows money to finance his plans. Under Mr. Biden’s proposal, the federal budget deficit would hit $1.8 trillion in 2022, even as the economy rebounds from the pandemic recession to grow at what the administration predicts would be its fastest annual pace since the early 1980s. The deficit would recede slightly in the following years before growing again to nearly $1.6 trillion by 2031.

Total debt held by the public would more than exceed the annual value of economic output, rising to 117 percent of the size of the economy in 2031. By 2024, debt as a share of the economy would rise to its highest level in American history, eclipsing a World War II-era record.

The budget is simply a request to Congress, which must approve federal spending. But with Democrats in control of both the House and Senate, Mr. Biden faces some of the best odds of any president in recent history in getting much of his agenda approved, particularly if he can reach agreement with lawmakers on parts of his infrastructure agenda. Those talks appear unlikely to produce bipartisan agreement, with Republicans offering a new proposal on Thursday that still left a wide gap between their ambitions and Mr. Biden’s. But the White House remains convinced it can enact significant parts of its agenda with just Democratic support using certain procedural moves.

Republicans warned on Thursday that Mr. Biden’s spending and tax plans would saddle the economy with dangerous levels of debt. “Biden’s budget has the highest debt/GDP ratio in American history,” Senator Cynthia Lummis, Republican of Wyoming, wrote on Twitter. “Congress needs to wake up. We can’t continue spending future generations into oblivion.”

Mr. Biden’s budget, like those proposed by his predecessors, includes assumptions about how the economy will perform if his policies are enacted. But in a break from the recent past, the Biden team is conservative in its forecasts — predicting small gains in economic growth even if Congress approves trillions of dollars in new spending.

Mr. Biden’s aides predict that even if his full agenda was enacted, the economy would grow at just under 2 percent per year for most of the decade, after accounting for inflation. That rate is similar to the historically sluggish pace of growth that the nation has averaged over the past 20 years. Unemployment would fall to 4.1 percent by next year — from 6.1 percent today — and remain below 4 percent in the years thereafter.

The forecasts continue to show his administration has little fear of rapid inflation breaking out across the economy, despite recent data showing a quick jump in prices as the economy reopens after a year of suppressed activity amid the pandemic. Consumer prices never rise faster than 2.3 percent per year and the Federal Reserve only gradually raises interest rates from their current rock-bottom levels in the coming years.

Mr. Biden has pitched the idea that now is the time, with interest rates low and the nation still rebuilding from recession, to make large upfront investments that will be paid for over a longer time horizon. His budget shows interest costs for the federal government remaining below historical averages for the course of the decade. Interest rates are controlled by the Federal Reserve, which is independent of the White House.

Even if interest rates stay low, payments on the national debt would consume an increased share of the federal budget. Net interest payments would double, as a share of the economy, from 2022 to 2031.

If Mr. Biden’s plans were enacted, the government would spend what amounts to nearly a quarter of the nation’s total economic output every year over the course of the next decade. It would collect tax revenues equal to just under one fifth of the total economy.

In each year of Mr. Biden’s budget, the government would spend more as a share of the economy than all but two years since World War II: 2020 and 2021, which were marked by trillions of dollars in federal spending to help people and businesses endure the pandemic-induced recession. By 2028, when Mr. Biden could be finishing a second term in office, the government would be collecting more tax revenue as a share of the economy than almost any point in the last century; the only other comparable period was the end of President Bill Clinton’s second term, when the economy was roaring and the budget was in surplus.

The documents suggest Mr. Biden will not use his budget to propose major additional policies or flesh out plans that the administration has thus far declined to detail. For example, Mr. Biden pledged to overhaul and upgrade the nation’s unemployment insurance system as part of the American Families Plan, but such efforts are not included in his budget.

Administration officials have said the budget reflects the policies Mr. Biden has pushed Congress to enact this year and does not rule out future initiatives that are not included in this plan.

Mr. Biden’s spending requests also do not include money for a so-called public option for health care, which would allow Americans to choose to enroll in a public health insurance plan like Medicare instead of a private plan. But Mr. Biden will call on Congress to create such a public option as part of his budget proposal, a document obtained by The Times shows.

Mr. Biden will also express support for Congress allowing Americans as young as 60 years old to enroll in Medicare, and for efforts in Congress to reduce federal spending on prescription drugs, including allowing Medicare to negotiate prices with pharmaceutical companies, the document shows. It supports an expansion of Medicare to cover dental, vision and hearing services. Those efforts have been a top priority for Senator Bernie Sanders, independent of Vermont, who is the chairman of the budget committee. They are presented as goals in the budget but are not included in the proposed spending.

A spokesman for the White House budget office declined to comment on Thursday.

Administration officials are set to detail the full budget, which will span hundreds of pages, on Friday in Washington. On Thursday, Mr. Biden is scheduled to deliver an address on the economy in Cleveland.

Loading...
Denial of responsibility! TechiLive.in is an automatic aggregator around the global media. All the content are available free on Internet. We have just arranged it in one platform for educational purpose only. In each content, the hyperlink to the primary source is specified. All trademarks belong to their rightful owners, all materials to their authors. If you are the owner of the content and do not want us to publish your materials on our website, please contact us by email – admin@techilive.in. The content will be deleted within 24 hours.
BidenBudgetcompetitiveEducation newsEducation updatenews updateProposetechi live
0
Share

Chrome 91 rolling out now with a bunch of new features