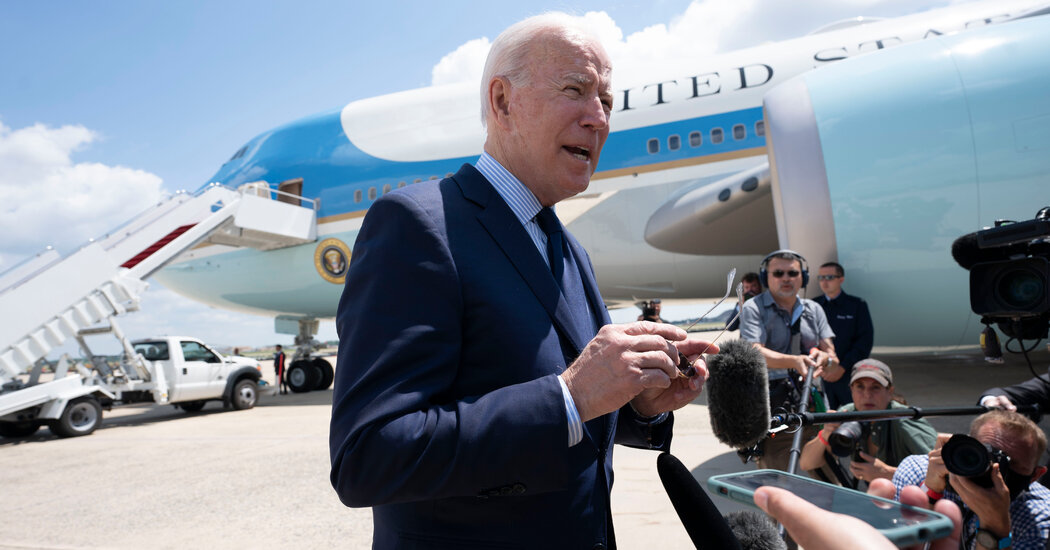 The administration is currently in negotiations with lawmakers over how to enact the next phases of its agenda, and many of the provisions in the budget will be met with resistance from Republicans. But the proposal offers a new view into the costs of the Biden administration’s infrastructure and jobs plans and the effect that this broad expansion of the social safety net would have on the economy over the next decade.

The budget also underscores the Biden administration’s belief that the fiscal situation is manageable, and that given historically low interest rates, now is the time to make major investments to combat climate change and reduce income inequality. White House officials see that spending as crucial to making the United States economy more competitive in the long run.

The proposal, which will be formally released on Friday, will further fuel the political debate over whether the country can afford such ambitious plans given the ballooning budget deficit.

“It is not the president’s fault that he inherited such a terrible debt situation, but it will fall to him to provide leadership on how to fix it,” said Maya MacGuineas, the president of the Committee for a Responsible Federal Budget. “It is quite welcome that they talk about paying for all the new initiatives, but the huge amount of upfront borrowing calls into question whether the promised savings would ever actually materialize.”

Here’s a look at some of the economic aspects of Mr. Biden’s plan:

The debt is not a hill to die on.

The administration believes that this is not the best metric for understanding the nation’s debt burden, which it acknowledges needs to be addressed in the long term. Much of the spending in the budget is “mandatory” for programs such as Social Security, Medicare and Medicaid.

“It remains well within and under historic norms, and I think it needs to stay that way,” Ms. Yellen said of interest costs at a House hearing on Thursday. “That’s a metric that I am looking at to judge the sustainability of federal finances.”

Bringing growth forecasts back to Earth.

Administrations have long used overly rosy economic growth projections as a way to make their fiscal promises appear feasible. During the Trump administration, the White House envisioned years of sustained growth at 3 percent or beyond, making it possible for its $1.5 trillion tax cuts to pay for themselves and to provide a balanced budget.

The Biden White House avoids such gimmicks in its budget. It assumes that the economy will rebound to grow 5.2 percent this year and 4.3 percent in 2022 before settling to grow 1.8 percent to 2 percent for the rest of the decade. Those rates are in line with what the Congressional Budget Office has forecast.

The projections could open up the Biden administration to criticism that its policies are setting the United States up for years of sluggish growth — the same type of criticism that the Obama administration faced from Republicans. However, some economists argued on Thursday that gross domestic product was not the best gauge of the economy’s health.

“Most importantly, a lot of the benefits of the President’s policies are improving inclusion, opportunity, climate,” Jason Furman, a Harvard professor and the chairman of the Council of Economic Advisers during the Obama administration, wrote on Twitter. “So even if they didn’t add anything to growth they would still likely be an improvement.”

The biggest critique of the Biden economic agenda is whether the economy is overheating. Prices of nearly everything have been picking up in recent months, but the White House insists this is the “transitory” result of an economy that is starting to reopen. It blames logistical issues such as shortages and supply chain bottlenecks rather than more fundamental matters for signs of inflation.

The Biden budget largely sticks to this script. It projects that the Consumer Price Index will rise to 2.1 percent this year, reach 2.2 percent in 2023 and then settle in at 2.3 percent annually from 2025 through 2031.

The steadiness of the numbers belie the fact that some Biden administration officials, including Ms. Yellen, have acknowledged as recently as Thursday that there would be high rates of inflation throughout the rest of the year.

The inflation benchmark in the budget will be a key one to watch as Republicans, including former President Donald J. Trump, have seized on the rising prices to argue that Mr. Biden has been bad for consumers.

Corporations will pick up the tab.

To help pay for its proposals, the Biden administration is preparing an overhaul of the tax code, the brunt of which will be felt by large corporations.

The budget details the White House’s plan for a $2 trillion corporate tax hike, which would be achieved by raising the corporate income tax rate to 28 percent from 21 percent and imposing tougher measures to curb offshoring. The proposals for the corporate tax code reverse or change many of the provisions in the 2017 Tax Cuts and Jobs Act, which was Mr. Trump’s signature legislative achievement.

One key provision in that law that is not addressed, however, is the fate of the individual income tax cuts for low- and middle-income taxpayers that are set to expire before 2026. Mr. Biden’s budget proposal assumes that they will, in fact, sunset.

That puts the onus on the administration to propose a plan for additional tax cuts in order to keep the president’s pledge that no taxpayer who earns less than $400,000 will have their taxes go up.

The Republicans on the House Ways and Means Committee, which led the drafting of the 2017 law, took note of the omission.

“This is the latest example of President Biden abandoning his lofty promise that he can fund trillions of dollars in new spending simply by taxing the wealthy or corporations alone,” they said in a statement.

Denial of responsibility! TechiLive.in is an automatic aggregator around the global media. All the content are available free on Internet. We have just arranged it in one platform for educational purpose only. In each content, the hyperlink to the primary source is specified. All trademarks belong to their rightful owners, all materials to their authors. If you are the owner of the content and do not want us to publish your materials on our website, please contact us by email – [email protected]. The content will be deleted within 24 hours.
Loading...
BidensBudgetDebtEconomicEducation newsEducation updategrowthInflation
0
Share