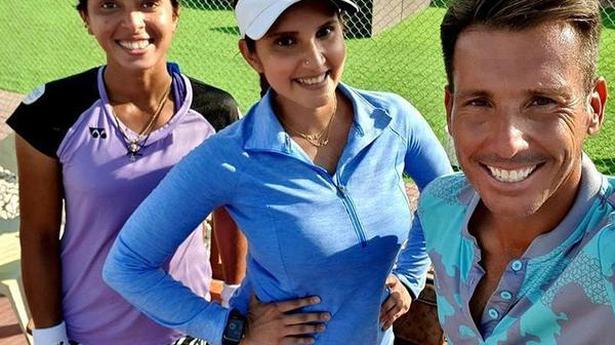 India No. 1 Ankita Raina confident of a good show

Facing Latvia spearheaded by 2017 French Open champion Jelena Ostapenko will be a big challenge for India in the upcoming Billie Jean King Cup World Group play-off tie on April 16 and 17.

But India’s No. 1 woman’s tennis player Ankita Raina isn’t worried as she is preparing hard with the ace Sania Mirza in Dubai.

“They will be the favourites, especially the way they played the United States and with their top-50 ranking. But we are ready for this challenge,” said Ankita, catching a breath between her tennis and gym sessions, on Tuesday.

In a season in which she has had a sound start — competing in doubles at the Australian Open, winning a WTA doubles title, and stepping up the quality of her game overall — Ankita felt that she was steadily moving up.

“I have had a good start to the season. Definitely feeling confident about better performances ahead. I can see the improvement in my game. Will do my best to continue and take it forward,” she said.

It was a pleasant surprise for the 28-year-old Ankita to be invited by Sania to stay with her in Dubai and train.

“It is great to train with Sania. She has been a World No. 1 in doubles for long, won Grand Slams and been top-30 in singles. She is an inspiration to all of us, not just tennis players. She is ready to share her experience with us. It is a great opportunity to stay with her, train and converse off court.

“It is even more inspiring to see her passion for the sport after becoming a mother. She has so much to say about tennis and how to prepare for big events. She is giving me minute tips to be more effective,” gushed a thrilled Ankita, a sincere student of the sport.

Having had prior experience of playing some of the world’s best players, Ankita knows that one has to compete without worrying about results.

“Yes, both Jelena Ostapenko and Anastasija Sevastova (World No. 47) are good. It is going to be a challenge for us. [But] we all practice day in and day out so that we can face such challenges and make the most of the opportunities,” said Ankita.

The tie will be played on the indoor hard courts at the National Tennis Centre Lielupe in Jurmala.

Denial of responsibility! TechiLive.in is an automatic aggregator around the global media. All the content are available free on Internet. We have just arranged it in one platform for educational purpose only. In each content, the hyperlink to the primary source is specified. All trademarks belong to their rightful owners, all materials to their authors. If you are the owner of the content and do not want us to publish your materials on our website, please contact us by email – [email protected]. The content will be deleted within 24 hours.
Loading...
AnkitaAnkita RainaBillieBillie Jean King CupCupFavouritesJeanKing
0
Share

Cause & Effect: Where is Your Focus?

Letters: These are not changes for the better