Notice: amp_is_available was called incorrectly. `amp_is_available()` (or `amp_is_request()`, formerly `is_amp_endpoint()`) was called too early and so it will not work properly. WordPress is currently doing the `pre_get_posts` hook. Calling this function before the `wp` action means it will not have access to `WP_Query` and the queried object to determine if it is an AMP response, thus neither the `amp_skip_post()` filter nor the AMP enabled toggle will be considered. It appears the theme with slug `publisher` is responsible; please contact the author. Please see Debugging in WordPress for more information. (This message was added in version 2.0.0.) in /home/runcloud/webapps/techilive/wp-includes/functions.php on line 5313
 'Bit scary': Olympic swimming champion Kyle Chalmers on Covid-hit Tokyo games - TechiLive.in 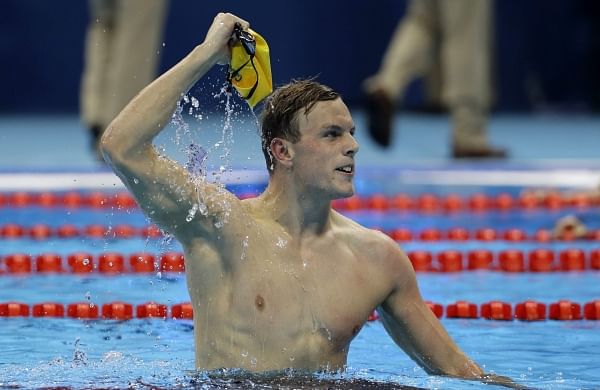 SYDNEY: Defending Olympic 100m freestyle champion Kyle Chalmers has admitted the prospect of being in Japan is a “little bit scary”, with the Australian expecting Covid-19 to impact the Tokyo Games.

The 22-year-old, one of Australia’s top swimming gold medal prospects, is ramping up preparations as he readies for an expected Olympic showdown with American Caeleb Dressel.

Chalmers outpaced Dressel to win gold at the Rio Olympics in 2016 but was pipped to the 2019 world title by the American in a jaw-dropping 46.96 seconds.

With Tokyo currently under emergency measures, less strict than blanket lockdowns, to tackle a fourth wave of coronavirus cases, he admitted he was nervous.

“Obviously, it is a little bit scary,” Chalmers told his hometown newspaper, the Adelaide Advertiser, late Friday ahead of next weekend’s Australian Olympic trials.

“My biggest fear is getting through the heats and semi-finals and then testing positive for Covid and you’re out of the final and sitting in your bedroom for 14 days.”

Most, if not all, Australian athletes will be vaccinated before heading to Tokyo. However, it was not immediately clear if Chalmers had already received a jab or even intended to be inoculated.

While Japan has seen a smaller Covid-19 outbreak than many countries, with just over 13,000 deaths, organisers face persistent domestic opposition to the Olympics amid fears of a new surge with thousands of athletes and staff entering the country.

Chalmers said he expected virus cases to hit the Games.

“I keep track of Tokyo (Covid case) numbers and they’re starting to come down, which is good, but I think it’s probably inevitable that Covid will be in and around the (athletes’) village and affect the Games in some capacity,” he said.

Despite his concerns, Chalmers is keen to defend his title.

“I’m not here training 40 hours a week to be second best in the world. I’m training to be number one, so I’m definitely highly motivated to stay there,” he said.

Denial of responsibility! TechiLive.in is an automatic aggregator around the global media. All the content are available free on Internet. We have just arranged it in one platform for educational purpose only. In each content, the hyperlink to the primary source is specified. All trademarks belong to their rightful owners, all materials to their authors. If you are the owner of the content and do not want us to publish your materials on our website, please contact us by email – admin@techilive.in. The content will be deleted within 24 hours.
bitChalmersChampionCOVIDhitGamesKylekyle chalmersnews update
0
Share

‘It Girl was a huge insult’: Alexa Chung on ageing and taking control of her career