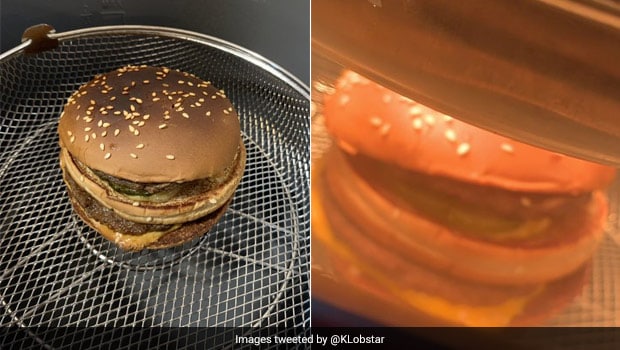 The New year has brought with it a whole new range of bizarre experiments. Internet users and food bloggers have been coming up with all sorts of innovative food pairings that leave us confused. From fusion foods to eccentric food combinations, users have started this year concocting some interesting and unique foods. Recently, a Twitter user who goes by the handle @KLobstar carried out a weird experiment. He put a Big Mac burger from McDonald’s in his air fryer for two hours and live-tweeted the progress on his handle. Take a look at the very first tweet in the series:

The bizarre experiment by @KLobstar went viral and raked in nearly 200k likes and 25k retweets. Interestingly, the same user had conducted a similar experiment with hot dogs last year which is why he decided to replace it with a burger this year. “I’ve learned my lesson from last year- no hotdogs. You can see I’ve also removed the lettuce from this burger, assuming it will catch on fire,” he wrote.

Explaining why he decided to do this experiment, he wrote, “For a year I’ve been getting the same question- “why” “why are you doing this” and it’s pretty obvious. I’m a genius with a lot of time on his hands (unemployed).” He further said that this year his wife was aware of his experiment but wasn’t enthusiastic about it even now.

The Twitter user carried out the experiment in two parts – heating the burger at 300 degrees for 60 minutes each time and giving a gap in between. First, the smell overpowered the entire kitchen and the burger became extremely hard from the top. The insides, however, remained pretty much the same at least during the first hour. Take a look:

50 minutes has elapsed. 70 minutes remain. Incredibly, not much has changed.

(Also Read: Man Finds Baby Frog Inside Box Of Lettuce, Here’s What He Did Next)

“Not much of a difference from the start, it’s a bit darker, a lot harder, but the inside remains nearly untouched,” he wrote in his tweet. The experiment went on for another hour, after which the cheese started bubbling and resembled peanut butter. His entire home was filled with the smell and, after which he decided to cut through it and eat it. “Cross-section- it appears the inside of the hamburger is relatively untouched and is very soft. Smells somewhat like homemade meatloaf,” the user concluded in his tweet. He added that the smell was, “It was terrible, absolutely disgusting. 7/10 stars.”

What did you think of this strange experiment conducted by the Twitter user? Tell us in the comments below.

Denial of responsibility! TechiLive.in is an automatic aggregator around the global media. All the content are available free on Internet. We have just arranged it in one platform for educational purpose only. In each content, the hyperlink to the primary source is specified. All trademarks belong to their rightful owners, all materials to their authors. If you are the owner of the content and do not want us to publish your materials on our website, please contact us by email – [email protected]. The content will be deleted within 24 hours.
airair fryerBizarrebizarre experimentburgerburger in air fryerExperimentFryer
Share

BMW’s Newest Electric Car Is Self-Driving In An…