Notice: amp_is_available was called incorrectly. `amp_is_available()` (or `amp_is_request()`, formerly `is_amp_endpoint()`) was called too early and so it will not work properly. WordPress is currently doing the `pre_get_posts` hook. Calling this function before the `wp` action means it will not have access to `WP_Query` and the queried object to determine if it is an AMP response, thus neither the `amp_skip_post()` filter nor the AMP enabled toggle will be considered. It appears the theme with slug `publisher` is responsible; please contact the author. Please see Debugging in WordPress for more information. (This message was added in version 2.0.0.) in /home/runcloud/webapps/techilive/wp-includes/functions.php on line 5313
 Both Played Their Cards Right and Now They’re Married - TechiLive.in 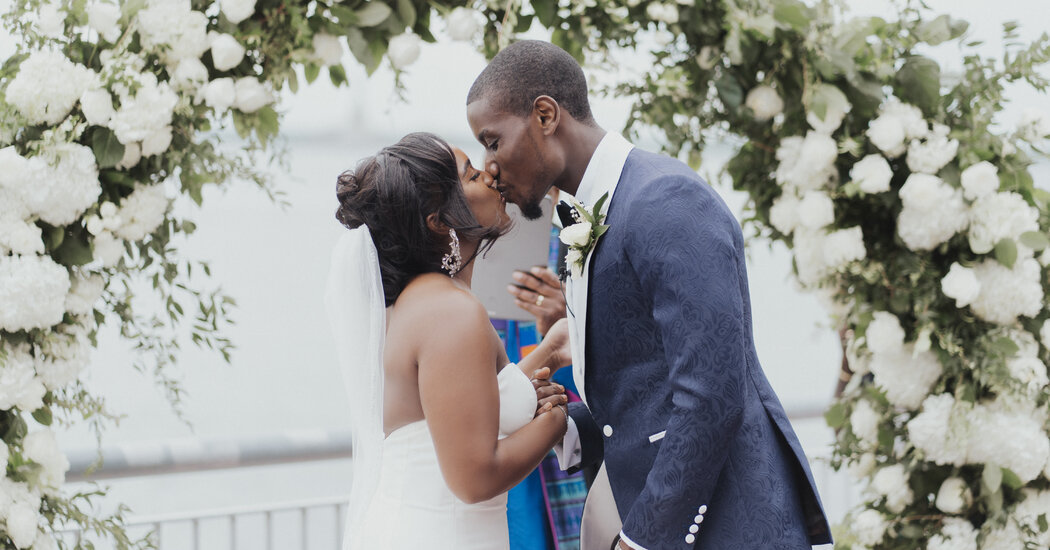 Both Played Their Cards Right and Now They’re Married

On the last day of Raquel Smith’s freshman year of high school, in 2006, she found herself on a card team opposing Gavin Hall and his partner in a game of spades. They were at a backyard barbecue in Brooklyn with friends from Brooklyn Tech.

It was flirty, Ms. Smith said, and as an experienced spades player, she made it clear she intended to win.

Mr. Hall, who was about to begin his senior year at the high school, was intrigued.

“I, of course, thought she was pretty, but also, talking to her, I thought she was, I wouldn’t say ‘arrogant,’ but she definitely had an attitude to her,” he said. “And come to find out she’s very competitive. That showed itself very quickly in that game.”

The two weren’t exactly strangers, Ms. Smith said, as they had passed each other every single day in the hallway, and hadn’t failed to notice each other. They had mutual friends, and each knew of the other.

“We’d make little eyes, but there would be no waving or saying ‘hi’ because we didn’t know each other,” she said. “We just never actually spoke.”

AOL Instant Messenger changed all that. They began chatting regularly, learning that they both had Caribbean heritage, both were from Brooklyn and both had been raised by their mothers. When school resumed, they hung out together with their mutual friends, and at some point, Mr. Hall said, he remembers asking her if she wanted to be his girlfriend and then providing ‘yes,’ ‘no’ and ‘maybe’ boxes for her reply.

“I thought that was what you were supposed to do,” he said. “But whether verbal or written, there was a ‘no.’”

He graduated and left for Villanova University, and the two fell out of touch. But when he came back after his first year, Ms. Smith was struck by how he had changed.

“I remember seeing him and thinking, OK, maybe I’ve been overlooking some stuff,” she said. “He’s a college boy, had a different demeanor, had his year of school, was dressing all nice. He probably seemed a little more mature to me at the time.”

The two had a first kiss while watching television at his house that summer. “His mom wasn’t home,” she said. “I could tell he was nervous.” For their first date, he picked her up in his mother’s car, met her mother, took her to an Italian place in Brooklyn and a stroll on the promenade.

By the time Ms. Smith started college at Cornell a year later, despite the distance, “We were actively, seriously dating,” she said.

In the ensuing years, their relationship traveled what they both call a long, winding road. He graduated from Villanova and went to the University of Rochester for an M.B.A. She graduated from Cornell and obtained a law degree from Columbia. She is now an associate in the Manhattan office of Lowenstein Sandler, a law firm in Roseland, N.J., and he is a senior strategy consultant for banking and capital markets in the Manhattan office of Accenture.

When she headed back to New York City to start law school, in 2013, the two became more serious.

In 2018, at the conclusion of a business-school assignment that involved a trip to India, Ms. Smith met Mr. Hall in Phuket, Thailand, where he proposed.

“She is someone who has motivated me in my personal career development, and has gone a long way to helping me get to the person I am now,” he said.

On May 16, the couple was married before 135 guests at the Liberty Warehouse, an events space in Brooklyn, in a ceremony led by the Rev. Dr. Adolphus C. Lacey, the senior pastor of Bethany Baptist Church.

And as to the result of the game that Ms. Smith and Mr. Hall played when they were first introduced? Her team lost. But, as she explains it, she really didn’t.

“It was rough because I play spades a lot and I really expected to win,” she said. “One of the few games I lost had such a huge impact on our lives. But I guess I gained something in the end!”

Denial of responsibility! TechiLive.in is an automatic aggregator around the global media. All the content are available free on Internet. We have just arranged it in one platform for educational purpose only. In each content, the hyperlink to the primary source is specified. All trademarks belong to their rightful owners, all materials to their authors. If you are the owner of the content and do not want us to publish your materials on our website, please contact us by email – admin@techilive.in. The content will be deleted within 24 hours.
cardslifestyle newslifestyle updateMarriednews updatePlayedtechi liveTheyre
0
Share

An accident derailed this NFL hopeful’s dreams. Now he’s coaching others to reach theirs