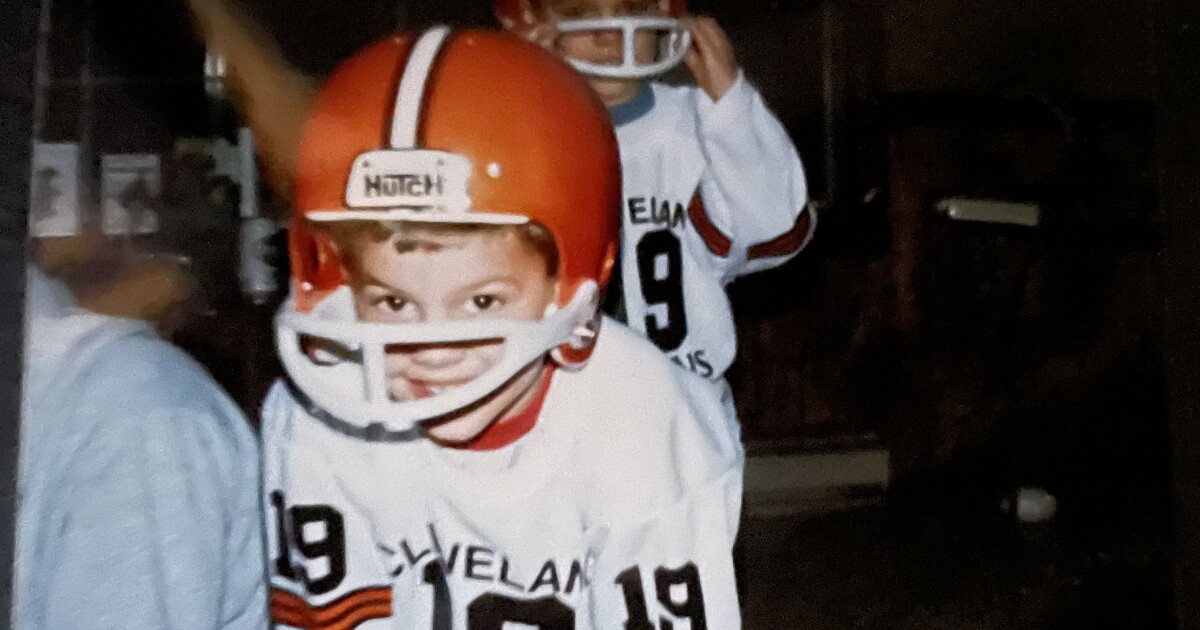 Until he started a family, he was a Cleveland Browns season-ticket holder.

Nothing, however, could make Mike Erkkila stop investing in his lifelong friend.

“I’m a Browns fan, yeah,” Erkkila said. “But I’m a Brandon Staley fan first. I know all the work he’s put in to get to where he is. My fandom goes aside because of loyalty to Brandon and all that work.

“Besides, I think the Browns can make the playoffs at 15-2.”

Staley and the Chargers play Cleveland on Sunday at SoFi Stadium. It’s a home game for the head coach and a hometown game for him, too.

Staley grew up in Perry, Ohio, about 45 minutes east of Cleveland, just up the Lake Erie coast.

As a kid, he dressed up for Halloween as Bernie Kosar. He and twin brother Jason attended Browns training camp. The two of them revered the names Byner and Newsome, had a poster of Webster Slaughter and Reggie Langhorne.

Erkkila, one of Staley’s high school teammates, estimated that half of the old Perry High Pirates today own Browns season tickets.

“There might have been a random person whose dad was a Steelers fan or something,” Erkkila said. “But, personally, I can’t remember anyone who wasn’t a Browns fan.”

Sunday will be a spin cycle of emotions for the folks back in northeast Ohio who know Staley and have followed his sudden rise in the NFL. They have celebrated his climb but now find the local boy standing in the way of the local team.

Cleveland is 3-1 and coming off a playoff appearance last season. The Browns never have appeared in a Super Bowl and last won a league title in 1964, two years before the Super Bowl even was born.

“I love him and I hope nothing but good things for him,” Tim Ritley said. “But I want to see my Brownies win this weekend. I’m not going to lie. OK, I joke. But, honestly, it’s a win-win for all of us. I think the whole thing’s really cool.”

Ritley’s father, Bob, was the longtime head coach at Perry High, winning 205 games during his quarter-century on the sidelines. Bob Ritley died in 2003, on the same night he was inducted into the school’s athletic hall of fame.

More than once since he took over the Chargers in January, Staley has referenced Ritley — including as recently as Friday — and all he learned from him, especially during Staley’s two seasons as Perry’s starting quarterback.

“My dad would be so proud about how Brandon handles himself today,” Tim Ritley said. “Success is great. But Dad wanted to groom good guys. Brandon’s a great example of that. He’s a great hometown kid. We all love him.”

The sharp focus and obsession with detail that define Staley’s coaching today began in Perry, where he and Jason, while in junior high, would sit and study the varsity team’s practices.

The boys were inquisitive gym and film rats, always asking why and searching for an edge, coming from a family so into sports that the Staleys bought a dog, a yellow lab, and named her Swoosh.

When they reached varsity, they would receive a scouting report from Ritley on the Pirates’ upcoming opponent on Monday. By Tuesday morning, Staley had memorized every player’s strengths and could recite height and weight of each.

Those memories and more rushed back to Mike Ryan when he watched as the Chargers introduced Staley in January. As a longtime Perry High assistant, Ryan said he wasn’t surprised to see Staley impress at that first news conference.

“He probably was asking himself those same questions when he was in high school,” Ryan said. “He’s prepared himself his whole life for this. That’s how detailed Brandon is.”

Erkkila laughed when asked about his buddy’s level of dedication back in the day. He explained that Staley wasn’t just the Perry quarterback, he also was an “understudy” to the head coach.

Staley “hit rewind and play way more often than anyone I’ve ever met,” Erkkila said, a reference to breaking down the opponent’s VHS tape. And Erkkila, for the record, went on to play four years of small-college football.

In an effort to give the Perry defense the best look possible, Erkkila said Staley would routinely serve as the scout team quarterback because, along with the defense, he also had studied and mastered the opposition’s offense.

“When I hear him in interviews now, it’s the same thing as sitting there talking to him in high school,” Erkkila said. “He’s as genuine as they come. He just knows a little bit more than the guy next to him. And it doesn’t matter what room he’s in. That’s always true.”

About a week ago, Staley was asked about surviving cancer. He was diagnosed with Hodgkin’s lymphoma at age 24. He offered a 500-word response. In the middle of his answer, he uttered, “I’m just a kid from Perry, Ohio.”

On Sunday — with his younger brother, Michael, and several family friends in attendance — those words will have added meaning.

“He’s one of our kids, you know, one of our guys,” Ryan said. “I hope he wins every game his team ever plays. I mean, I don’t know Baker Mayfield or any of those guys. I never met them. I don’t know anything about him. But I know this guy and I know what he’s all about.”

Denial of responsibility! TechiLive.in is an automatic aggregator around the global media. All the content are available free on Internet. We have just arranged it in one platform for educational purpose only. In each content, the hyperlink to the primary source is specified. All trademarks belong to their rightful owners, all materials to their authors. If you are the owner of the content and do not want us to publish your materials on our website, please contact us by email – [email protected]. The content will be deleted within 24 hours.
BrandonBrownsbuddiesfansHighnews updateOhioSchool
Share