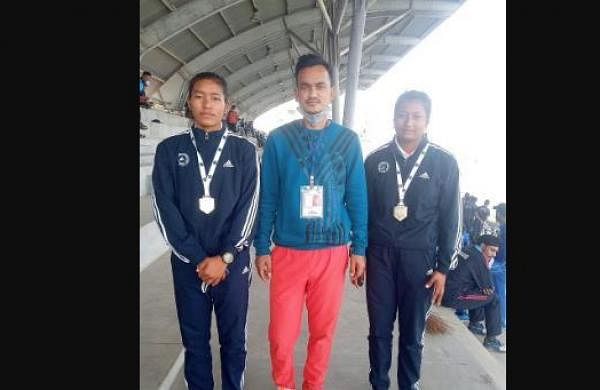 CHENNAI: Funding from the state association and friends helped them compete in the nationals — both junior and senior championships. Financial constraints, however, could not deter them from finishing on the podium in both events.

Meet Manipur’s women rowers, Th Priya Devi and H Tendenthoi Devi, who bagged 2000m double sculls silver on their debut at the ongoing 39th Senior National Rowing and 23rd Open Sprints Championships in the Army Rowing Node, Pune. Only a month ago, they had clinched gold in the same event in the junior nationals.

Hailing from modest families — Tendenthoi’s father H Binoy Singh is a fisherman while Priya’s father Th Somen Singh is a farmer — the duo started rowing only a few years after they cleared selection trials organised by the Manipur Rowing Association.

“Sports for children here is one step towards a better future. Like others, Priya and Tendenthoi also started rowing hoping for government jobs so that they can contribute towards families’ income,” Debit Singh, who coaches around 130 children at the Loktak Takmu Water Sports Complex in Moirang along with Narengbam Lakshmi Devi, told this daily.

Singh claimed that the complex is in a dilapidated state with children forced to live in shabby structures. “Rowing is an expensive sport. We can produce good rowers but don’t have the equipment and financial support. Even for coming here and participate, we had to borrow money from friends and relatives. The state government reimburses the amount but it takes time.”

Priya and Tendenthoi clocked 8:39.6 seconds to finish second behind Avinash Kaur and Kiran, whose timing was 8:28.0 seconds. Deepika Xess and Reshma Kumari Minz secured bronze with the timing of 8:54.8 seconds. The duo also competed in the 500m double sculls as well but missed out on a bronze medal with a few microseconds.

Both live in separate villages around 2-3km from the centre but decided to stay at the complex to make sure they train regularly. “Travelling every day will cost them so that they prefer to stay at the complex. These children could do much better if given facilities. In just a few years, Priya and Tendenthoi won medals. If given resources, they can improve significantly and go on to represent the country,” signed off the coach.

Meanwhile, the national championships concluded on Saturday with 500m finals of various events in men’s and women’s categories.

Denial of responsibility! TechiLive.in is an automatic aggregator around the global media. All the content are available free on Internet. We have just arranged it in one platform for educational purpose only. In each content, the hyperlink to the primary source is specified. All trademarks belong to their rightful owners, all materials to their authors. If you are the owner of the content and do not want us to publish your materials on our website, please contact us by email – [email protected]. The content will be deleted within 24 hours.
BravingdebutFinishManipurNationalsnews updateoddspodium
Share

New target may help protect bones as we age

Pogba could be out for at least another month, says Rangnick