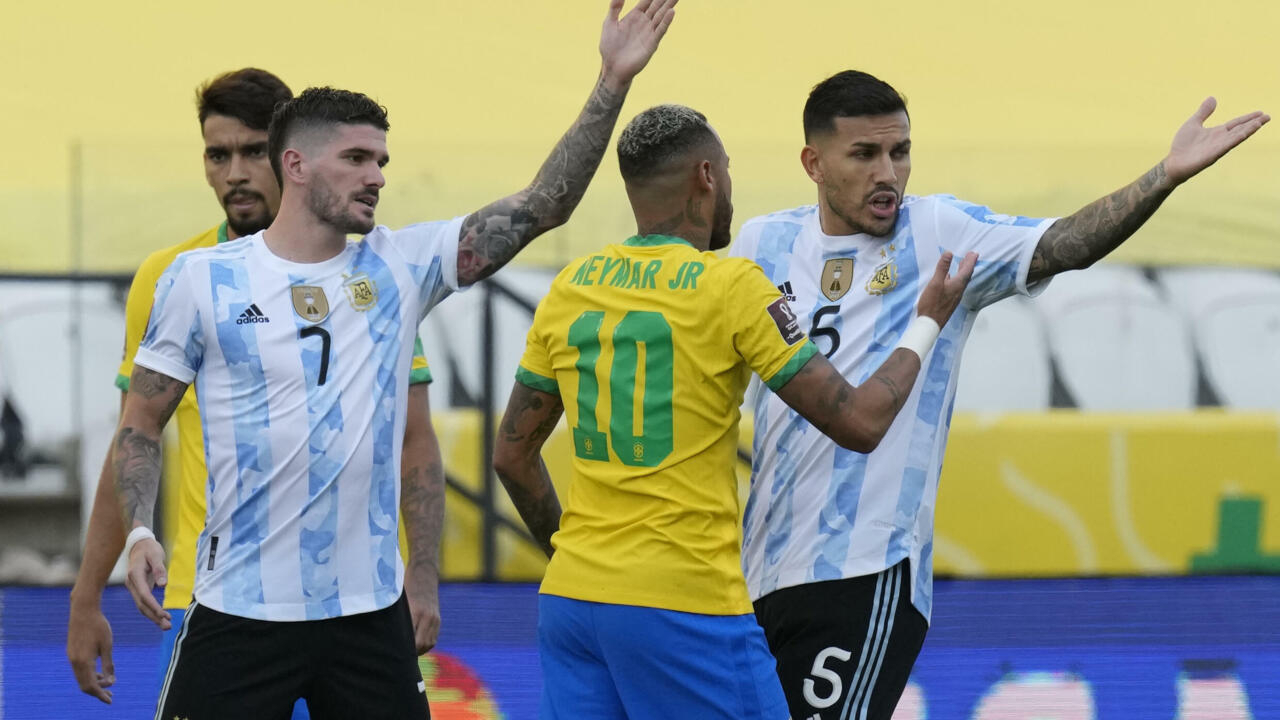 Amid incredible scenes at Sao Paulo’s Neo Quimica Arena, the match between the two giants of South American football was halted when a group of Brazilian public health officials came onto the pitch, triggering a melee involving team staff and players.

Argentina’s players trudged off to the locker room as the furore unfolded.

Argentina captain Lionel Messi later re-emerged from the tunnel without his team shirt on as confusion swept around the stadium.

The stunning intervention came just hours after Brazil’s health authorities said four players in Argentina’s squad based in England should be placed in “immediate quarantine” for breaching Covid-19 protocols.

Romero, Lo Celso and Martinez were all in the Argentina starting line-up that kicked off Sunday’s game — triggering the intervention onto the field of officials wearing ANVISA shirts.

The four Premier League players were accused of failing to disclose that they had spent time in the United Kingdom in the 14 days prior to their arrival.

“We got to this point because everything that ANVISA directed, from the first moment, was not fulfilled,” ANVISA director Antonio Barra Torres said on Brazilian television.

“(The four players) were directed to remain isolated while awaiting deportation, but they did not comply. They went to the stadium and they entered the field, in a series of breaches,” the official added.

A government order dating from June 23 prohibits the entry into Brazilian territory of any foreign person from the United Kingdom, India or South Africa, to prevent the spread of variants of the coronavirus.

“ANVISA considers that this situation represents a serious health risk and recommends that the local health authorities (of Sao Paulo) order the immediate quarantine of the players, who are prohibited from taking part in any activity and from remaining on Brazilian territory,” the agency said in a statement earlier Sunday.

ANVISA said Brazil’s Federal Police had been notified so that “the necessary measures are taken immediately”.

With the game apparently abandoned, Brazil’s squad began a practice game on the arena with Argentina’s team having reportedly left the stadium.

South American football’s governing body CONMEBOL said in a statement that the game had been “suspended” but did not say whether the match would resume or be replayed.

“By decision of the match referee, the match organized by FIFA between Brazil and Argentina for the qualifiers for the the World Cup is suspended,” CONMEBOL said in a statement.

“The referee and the match commissioner will submit a report to the FIFA Disciplinary Committee, which will determine the steps to follow. These procedures adhere strictly to current regulations.”

CONMEBOL added that as the qualifiers were part of a FIFA competition, it would be up to football’s global governing body to determine the next course of action.

“The World Cup qualifiers is a FIFA competition,” CONMEBOL said. “All decisions concerning its organization and development are the exclusive power of that institution.

The controversy comes after nine Brazilians based in the Premier League failed to travel to South America following objections from their clubs.

Loading...
Denial of responsibility! TechiLive.in is an automatic aggregator around the global media. All the content are available free on Internet. We have just arranged it in one platform for educational purpose only. In each content, the hyperlink to the primary source is specified. All trademarks belong to their rightful owners, all materials to their authors. If you are the owner of the content and do not want us to publish your materials on our website, please contact us by email – [email protected]. The content will be deleted within 24 hours.
AmericasArgentinaBrazilBrazilArgentinaControversyCoronavirus (Covid-19)Covidfootball
Share

Dave Franco, Alison Brie to star in Amazon’s ‘Somebody I Used To Know’