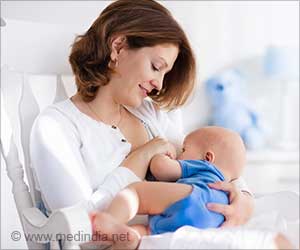 Given that there are 4 million births annually, this equates to almost 800,000 women with postpartum depression each year.

In addition, small and often homogenous samples have yielded ungeneralizable results lacking in statistical power with biased results due to higher levels of education, income, and proportions of white participants compared to the general population of the sampled country.

Results of the study, published in the journal Public Health Nursing, demonstrate that postpartum depression is a significant health issue among American women with nearly 13 percent of the sample being at risk.

. An unexpected finding was that there was no significant difference in postpartum depression risk among women with varying breastfeeding intent (yes, no, unsure).

“Women suffering from postpartum depression, which occurs within four weeks and up to 12 months after childbirth, endure feelings of sadness, anxiety and extreme fatigue that makes it difficult for them to function,” said Christine Toledo, Ph.D., senior author and an assistant professor in FAU’s Christine E. Lynn College of Nursing.

“Women with postpartum depression who are not treated also may have negative outcomes, including difficulty bonding with and caring for their children, thoughts of harming themselves or their infant, and also are at an increased risk of substance misuse.”

In addition, they have a 25 percent increased risk of suffering further depressive disorders unrelated to childbirth up to 11 years later.

“Findings from this important study suggest that breastfeeding is a cost efficient and healthy behavior that can decrease a woman’s risk for postpartum depression,” said Safiya George, Ph.D., dean, FAU Christine E. Lynn College of Nursing.

“Nurses in particular play an important role in educating and promoting both the maternal health benefits of breastfeeding and infant benefits such as providing necessary nutrients and protecting them against allergies, diseases and infections.”

The study was funded by the Ph.D. Scholarly Award by the Sigma Theta International, Beta Tau Chapter.

Denial of responsibility! TechiLive.in is an automatic aggregator around the global media. All the content are available free on Internet. We have just arranged it in one platform for educational purpose only. In each content, the hyperlink to the primary source is specified. All trademarks belong to their rightful owners, all materials to their authors. If you are the owner of the content and do not want us to publish your materials on our website, please contact us by email – [email protected]. The content will be deleted within 24 hours.
affectsbreastfeedingbreastfeeding and Postpartum DepressionBreastfeeding durationBreastfeeding StatusdepressionDurationHealth news
Share

Kathy Lette on what women really want in a lover