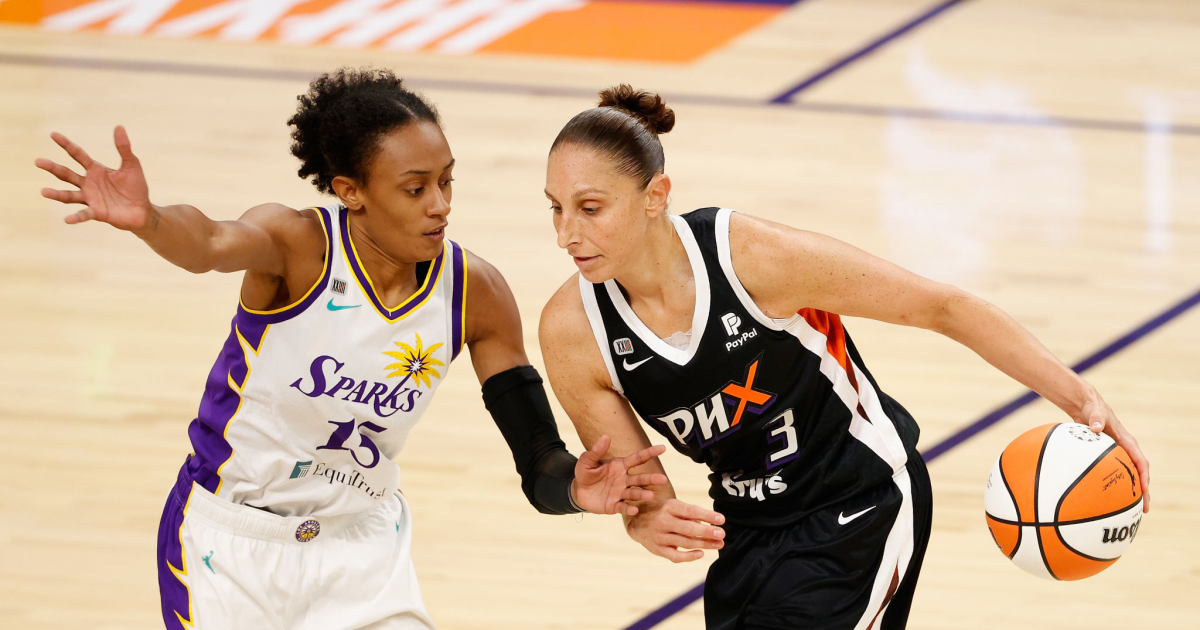 Brittney Sykes can get defensive with the best: Here’s how

The blocks are the best.

It’s the timing and the look of helplessness on an opponent’s face when Brittney Sykes flies in undetected and swats the ball away with a long, thin arm. For the 5-foot-9 Sykes, the gratifying slap of a clean block is more than just another highlight for her growing reel.

“It’s poetry in motion,” Sykes said with a satisfied grin.

The Sparks guard has turned her defense into an art form while putting together a campaign for defensive player of the year and anchoring the Sparks’ fourth-rated defense. Sykes, who averages 4.4 rebounds and 1.8 steals in 28.6 minutes, all career highs, with 0.5 blocks, is trying to become the fourth Sparks player to win the league’s top defensive award and the third in the last five years, following Alana Beard (2017, 2018) and Candace Parker (2020).

Sykes leads the league in total steals and the Sparks, despite having the WNBA’s worst offense, are within striking distance of the playoffs thanks to a defense that holds opponents to 77.9 points, which ranks second lowest in the league.

The Sparks (10-19) are one game out of the final playoff spot with three regular-season games remaining, including Sunday’s home finale at Staples Center against the Seattle Storm.

Athletic blocks against everyone from 6-foot-9 Brittney Griner to U.S. Olympian Ariel Atkins give Sykes social media fodder to push her resume as defensive player of the year, but it’s the small details that have turned her into an elite defensive force. She loves blocks but knows to bat a ball up and out as opposed to down to not draw fouls. She uses her body position to bait teams into throwing passes she’ll intercept for breakaway layups.

“She’s there when you don’t even think she’s there,” Sparks guard Erica Wheeler said.

Sparks guard Brittney Sykes breaks down how she blocked a shot by Ariel Atkins during a recent game against Washington.

Sykes’ defensive rise seems to surprise even her. She was the third-leading scorer in Syracuse history before being drafted seventh overall in 2017. During her three-year tenure with the Atlanta Dream, she played defense primarily to not get embarrassed. Secondly, she wanted her blocks to get on ESPN’s “SportsCenter.”

Now after nearly two years with the Sparks, Sykes is almost scared to admit to her past defensive lapses, especially as assistant coach Latricia Trammell happens to walk by at the team’s Glendale practice facility.

Trammell, who is the team’s defensive tactician, used passion and enthusiasm to convince Sykes to play stellar defense consistently. While Sykes’ long wingspan made it easy for coaches to use her on defense, Trammell was one of the first to say she could be a great defender, not just tool in a system.

Trammell helped mold Sykes into a WNBA All-Defensive second-teamer last year as coaches recognized the rangy guard for ranking 15th in steals despite playing the 53rd-most minutes per game.

“[Defense] doesn’t take a lot of skill, it just takes a lot of determination and effort and it’s clear that Brittney has honed in on that and made that her role on the team,” said Beard, who retired after the 2019 season. “Not to take anything away from her offensively, but she has started to understand that she is providing exactly what her team needs her to provide.”

Sykes used to hate being guarded by Beard, whose retirement forced the Sparks to find a new defensive stopper. When Sykes was traded from the Dream in 2020, she joined a team with elite offensive talent with Candace Parker, Nneka Ogwumike and Chelsea Gray. She knew she had to make an impact in a different way.

Now Sykes wants to inflict the same sense of panic in her opponents she felt when Beard approached on defense.

“When it comes to defense, that’s every night,” said Sykes, who is averaging nine points per game. “Whether you made a shot, missed a shot, your defense should be set every night.”

With Trammell as her defensive guide, Sykes started setting more ambitious goals each game. Keep the leading perimeter player to less than her scoring average. Get a specific number of deflections. Get steals not only on the wing where she naturally plays, but also in the post. Collect more rebounds.

The biggest goal is defensive player of the year.

Sparks guard Brittney Sykes analyzes how she picked off a pass and scored on a fastbreak during a recent game against Indiana.

For an honor typically dominated by post players, Sykes would be just the fifth player 6-foot or shorter to win.

Unlike the all-defensive teams that are decided by coaches, the individual award is chosen by a panel of media members. The process usually starts with a look at common statistics like rebounds, blocks and steals. This year, that step reveals a clear frontrunner: Minnesota center Sylvia Fowles.

Do those simple numbers really convey defensive impact? Sykes asks that question of anyone who will listen to her defensive gospel.

Growing interest in advanced statistics could help even the playing field for guards who struggle to pad their rebounding and blocked shots stats against bigger post players. Among players who average at least 20 minutes, Fowles is 30th in defensive rating. Sykes is 11th. Five of the top six players are on the Connecticut Sun, the current No. 1 playoff seed and the league’s top defense.

Of the top 30 defensive players averaging at least 20 minutes, Sykes and her Sparks teammates are the only players on a losing team. Sykes knows the team’s struggles could hinder her opportunity to seriously contend for any individual honors.

“How the hell are you trying to win DPOY and y’all losing?” Sykes said. “Numbers don’t lie and that’s where it also is kind of a pain in the ass about DPOY and winning and losing because if you are DPOY, that means your team is the best freaking defensive team.”

Opponents have scored more than their season average only eight times against the Sparks, who force a league-leading 18.5 turnovers. When Sykes is on the court, the Sparks’ defensive rating is 94.5 compared to 102.8 when she’s on the bench. The 8.3-point difference is the largest drop for any Sparks player who has appeared in more than 140 minutes.

“I’m going to ask the people that vote for this incredible honor to not just look at the stats because if you think about Slim, she’s a catalyst for our defense,” Trammell said.

Teammates feed off Sykes’ energy on defense and enjoy her blocks almost as much as she relishes seeing the frustration on her opponents’ faces after she gets a stop. After stuffing New York Liberty star Sabrina Ionescu on a last-second attempt to seal a win earlier this year, Sykes took an extra moment to appreciate that look on Ionescu’s face as the former Oregon star was getting helped to her feet.

The play was risky. Ionescu was already shooting from nearly 30 feet away. A foul would have given her three free throws to try to tie the score. Even Beard admits she wouldn’t have gone for the block. Why did Sykes?

On top of the victory, it also checked off another goal for Sykes. That night, the play was No. 9 on the “SportsCenter” top 10 highlights.

Denial of responsibility! TechiLive.in is an automatic aggregator around the global media. All the content are available free on Internet. We have just arranged it in one platform for educational purpose only. In each content, the hyperlink to the primary source is specified. All trademarks belong to their rightful owners, all materials to their authors. If you are the owner of the content and do not want us to publish your materials on our website, please contact us by email – [email protected]. The content will be deleted within 24 hours.
Loading...
BrittneydefensiveHeresnews updatesports newssports updateSykestechi live
Share