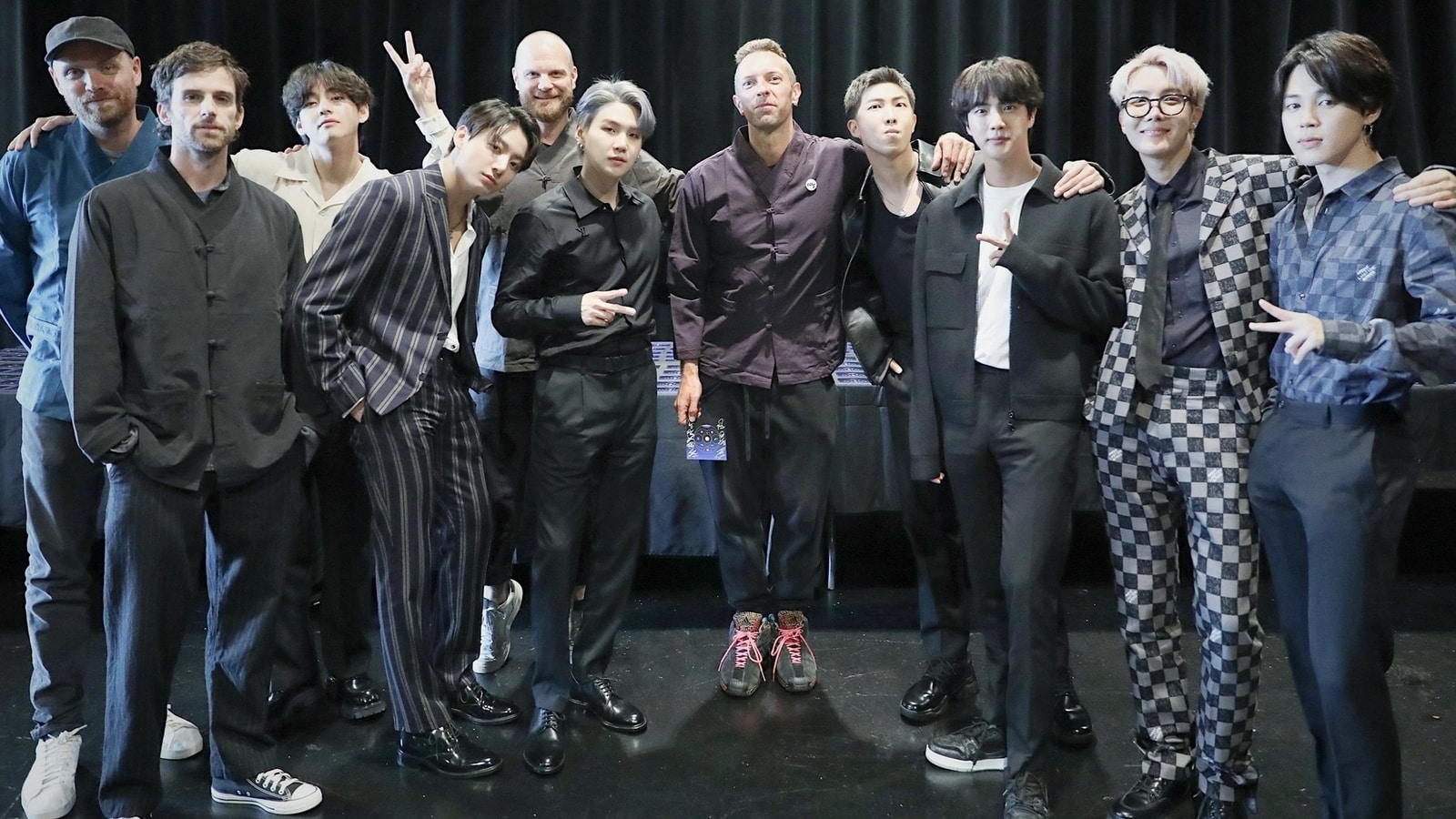 BTS gift Coldplay modernised hanboks ahead of My Universe release, fans wonder if it was Jungkook’s idea

BTS and Coldplay recently met in New York, just a couple of days before they are set to release their new song, My Universe. The K-pop group gifted the British band modernised hanboks.

Ahead of BTS and Coldplay’s first collaboration, My Universe, the British band and the K-pop group caught up in New York. Both the groups, taking to their respective Twitter handles, shared pictures of the members posing together.

While the picture was enough to fuel excitement over their collaboration, BTS fans got a tad emotional when they noticed Coldplay members wearing modernised hanboks. A modernised or casual hanbok is easier to maintain and comes at a reasonable price as compared to the traditional outfit.

Coldplay lead singer Chris Martin was gifted a purple-coloured modernised hanbok, an outfit which Jungkook has previously worn many times and made popular internationally. Other members wore modernised hanboks in the shades of blue, grey and black.

Fans took to Twitter and shared their reactions. “Jungkook might have prepared it as gifts for them,” one tweeted. “Did Jungkook give Chris Martin a modern hanbok?” asked another. “WAIT JUNGKOOK WHAT HAVE YOU DONE (laughing emoji) did you pass your purple hanbok on to Chris Martin,” a third tweet read. “A fan spotted Chris Martin from Coldplay wearing a purple top of modernised hanbok and they said it’s BTS who gave it to him. Jungkook was spotted in before wearing same top, he also gifted one to an Enhypen member before. It could be his idea. How sweet,” a BTS fan said.

BTS have been in New York since earlier this week. The group travelled to the United States as South Korea’s ‘Special Presidential Envoy for Future Generations and Culture’ and delivered a speech at the 76th United Nations General Assembly on Monday. They also addressed a gathering at the MET Museum.

During their official trip, BTS also caught up with Megan Thee Stallion, with whom they recently collaborated on a remix of Butter. The group posed for a few selfies and the American rapper revealed she received a Koya, a sleepy blue koala from the BT21 brand, from the group.

Denial of responsibility! TechiLive.in is an automatic aggregator around the global media. All the content are available free on Internet. We have just arranged it in one platform for educational purpose only. In each content, the hyperlink to the primary source is specified. All trademarks belong to their rightful owners, all materials to their authors. If you are the owner of the content and do not want us to publish your materials on our website, please contact us by email – [email protected]. The content will be deleted within 24 hours.
aheadBTSBTS coldplaybts coldplay hanboksbts coldplay my universebts coldplay my universe release datebts hanbokColdplay
Share

How Have You Experienced Extreme Weather?