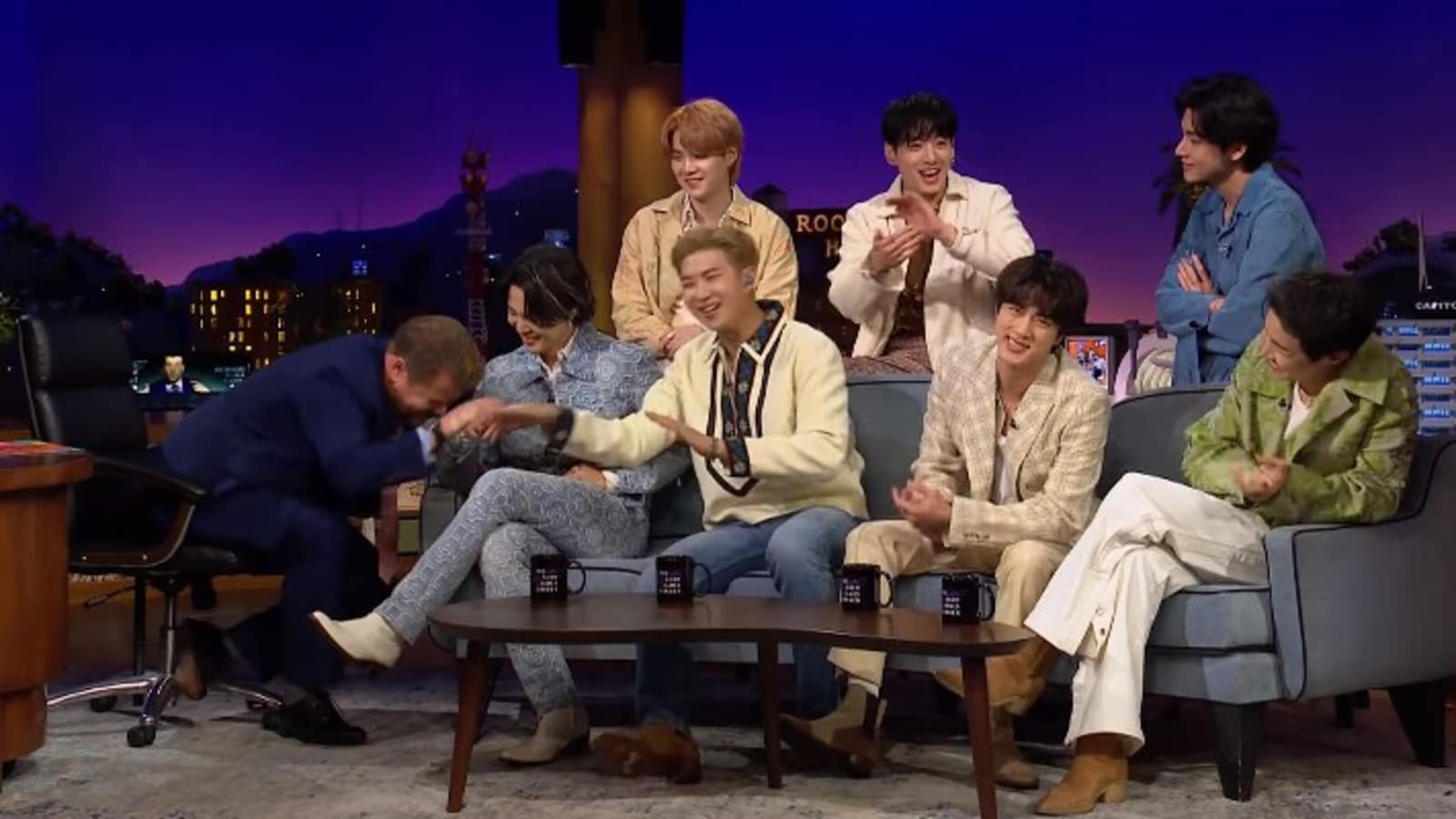 Television host James Corden spoke about his recent remark on BTS’ fans, known as ARMY, where he had called them ’15-year-old girls’. In a video of The Late Late Show with James Corden, BTS members RM, Jin, Suga, J-Hope, Jimin, V and Jungkook appeared on the show. After James acknowledged his remark as wrong, RM said ‘we appreciate your apology’.

In the show, BTS leader RM asked the host, “James, how about you? You been in some hot waters with ARMY. Are you alright?” James replied, “We did two jokes which I didn’t think were in any way offensive to anybody.” Recalling his comments on BTS at the UN summit and the fans of the group, he continued, “And we said this was where I think it was wrong, we said that your fans were 15-year-old girls.”

James also said, “It of course isn’t true because I’m 43 years old and I consider myself one of the biggest BTS fans on planet earth. I’ve never been on that side of the ARMY before.” He said that someone told him they hoped he died, which he felt was ‘extreme in response to quite two harmless jokes’.

After James explained further about his comment, RM smiled and said, “James it’s okay, we appreciate your apology. Wanted to clear that up.” James then asked Jimin, “Am I still papa mochi?” Jimin responded, “Papa mochi, I believe you.”

In the show, James also congratulated BTS on their win at the 2021 American Music Awards (AMAs). James then asked BTS members if they ever get nervous. Jungkook replied, “I was nervous today.” He then continued, “It’s been over two years since we last saw our fans. It’s been a long time so I’ve become very nervous.” Several videos and pictures surfaced online on Wednesday showing BTS members performing their songs including Butter and Dynamite on the streets of Los Angeles.

When James asked BTS about the last two years and the performances that they did remotely, Suga said, “At first we were very bitter about the whole situation. It was very difficult. But I think there’s more we learned from the situation. From the time we were briefly apart, we learned how precious everything is. The performances, the fans…it was a chance to think about once again how precious it all is. I think we tried to see less of the bad and more of the good.”

V also spoke, “I spent a lot of time together with the members. For example, the seven of us would shoot some content together. We lived more like entertainers than singers. It really made us work together even better.”

James then held Jimin’s bicep asking if he has been working out. Jimin replied, “Just running, climbing stairs and light exercise.” Jimin then gave several poses flexing his muscles. V then asked James to touch his thighs which James called ‘a piece of wood’. The group also performed their song Permission to Dance on the show.

Denial of responsibility! TechiLive.in is an automatic aggregator around the global media. All the content are available free on Internet. We have just arranged it in one platform for educational purpose only. In each content, the hyperlink to the primary source is specified. All trademarks belong to their rightful owners, all materials to their authors. If you are the owner of the content and do not want us to publish your materials on our website, please contact us by email – [email protected]. The content will be deleted within 24 hours.
15yearoldapologyArmyBTScallsCordenentertainment newsEntertainment update
Share

Your guide to the leanest cuts of beef