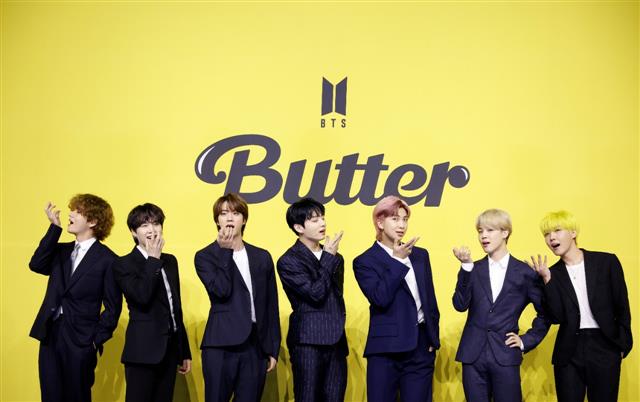 Koran pop sensation BTS won big at the 2021 Billboard Music Awards by taking home trophies in all the four categories they were nominated in.

The hit septet, comprising RM, V, Jin, Suga, J-Hope, Jimin, and Jungkook, took home the award for top-selling song for their first English single ‘Dynamite’ and lit the up the BBMA’s stage with their debut performance on “Butter”, their second English single.

“It’s really an honour to be a winner of such a significant title…We want to share some fresh energy with everyone with Dynamite,”BTS leader RM said from Seoul.

The BBMA ceremony was aired live from the Microsoft Theater in Los Angeles, but the group  joined virtually from Seoul, South Korea.

The group, whose full name is Bangtan Sonyeondan (Bulletproof Boy Scouts) or Beyond The Scene, their English branding, also received the top social artist award, for the fifth consecutive year.

“Top social artist for the fifth consecutive time. Thank you ARMY and BBMAs for such an incredible title,” J-Hope said in a video shared by the Billboard Music Awards Twitter handle.

The performance on “Butter”, BTS’s summer song, was a looked forward event at the BBMAs for fans around the globe and the group was also excited about it.

In a recent interview with PTI, BTS had said that it was a special feeling to return to the BBMAs with “Butter” after having such a memorable run at the charts last year for “Dynamite”.

“One of the most memorable moments last year was when we got our first number one song on the Billboard’s Hot 100 chart. So it’s an honour to perform ‘Butter’ for the first time at the awards show that bears such a special meaning for us,” Suga had told PTI.

The BBMAs were hosted by singer-actor Nick Jonas. — PTI

Denial of responsibility! TechiLive.in is an automatic aggregator around the global media. All the content are available free on Internet. We have just arranged it in one platform for educational purpose only. In each content, the hyperlink to the primary source is specified. All trademarks belong to their rightful owners, all materials to their authors. If you are the owner of the content and do not want us to publish your materials on our website, please contact us by email – [email protected]. The content will be deleted within 24 hours.
Loading...
BBMAsBTSButterentertainment newsEntertainment updatenews updatePerformanceshine
0
Share

Op-Ed: The Jury Is Out on COVID Boosters