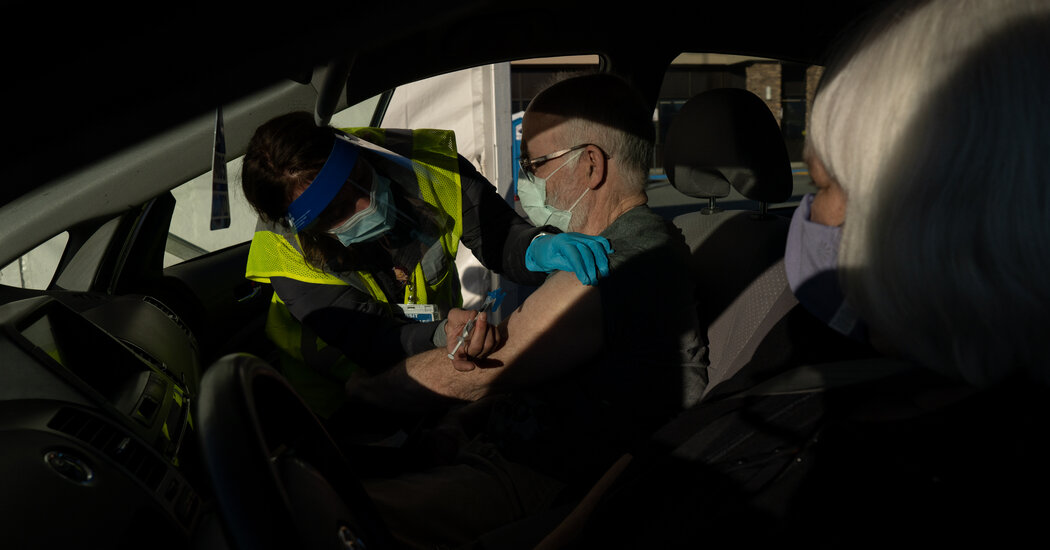 Faced with rising infections and an anticipated surge in holiday travel, scientific advisers to the Centers for Disease Control and Prevention on Friday endorsed booster shots of the coronavirus vaccines for all Americans over 18.

If formally adopted by the agency, the recommendation will fulfill President Biden’s pledge in August to make the extra doses available to all adults, capping months of scientific debate over whether most people really needed boosters. The shots are already available at many drugstores, doctors’ offices and vaccination centers.

The C.D.C. advisers said that Americans over age 50, as well as those 18 and older living in long-term care facilities, “should” get booster shots of the Pfizer-BioNTech or Moderna vaccines. All other adults over age 18 “may” get booster doses, the panel decided.

Recipients of Johnson & Johnson’s one-dose vaccine already were cleared to get a booster at least two months after the initial shot.

Earlier on Friday, the Food and Drug Administration authorized booster shots for all Americans over age 18. But the C.D.C. usually sets the clinical guidelines adopted by the medical profession. The agency’s director, Dr. Rochelle Walensky, is expected to approve the panel’s recommendation later on Friday.

Many experts worried that extra doses were not needed by most adults to prevent serious illness and death, and that a push for boosters could constrain global vaccine supplies even as people in many poor countries have not received their first doses.

But infection rates are rising again in the United States and soaring in much of Europe. After recording more than 14,000 new infections on Thursday, Austria will go into a nationwide lockdown on Monday and impose a coronavirus vaccination mandate in February, the first such mandate in a Western democracy.

Health officials in many of these countries, and now in the United States, see booster shots as a way of shoring up defenses against a tenacious enemy and gaining the upper hand in the pandemic. France, for example, has mandated booster shots for those over age 65 who wish to get a health pass permitting access to public venues.

“Look what other countries are doing now about adopting a booster campaign virtually for everybody,” Dr. Anthony S. Fauci, the Biden administration’s top Covid adviser, said at a conference on Tuesday. “I think if we do that, and we do it in earnest, I think by the spring we can have pretty good control of this.”

In the United States, infections have increased by 33 percent on average over the past two weeks, to 94,000 a day. The C.D.C.’s decision landed just as Americans prepare to spend the holidays with family and friends, gatherings likely to accelerate the trend.

The shots may help forestall at least some infections, particularly in older adults and those with certain health conditions. But many experts, including some who advise federal agencies, are skeptical that boosters alone can turn the tide.

The extra shots are unlikely to offer much benefit to adults under 65, who remain protected from severe illness and hospitalization by the initial immunization, the experts said.

Moreover, more than 100 million Americans have not received even the first dose of a coronavirus vaccine. In the United States, as in Europe, deep pockets of vaccine-resistant adults are likely to prolong the pandemic, however well protected their neighbors may be.

Many pandemic-weary Americans, too, seem unmoved by the sudden push for boosters. More than 85 percent of the adult population became eligible when the C.D.C. added depression and other mental illnesses to the list of conditions that qualify people for an extra vaccine dose.

But only about 18 percent has chosen to get one. And those may not be the people most in need of extra protection.

The most effective strategy for the administration would be to rush booster doses to residents of nursing homes and long-term care facilities, said Dr. Celine Gounder, an infectious disease specialist at Bellevue Hospital Center. These are the adults mostly likely to benefit.

At the moment, fully vaccinated white people are more likely to have obtained booster shots, compared with other racial and ethnic groups, according to data compiled by the Kaiser Family Foundation.

At the scientific panel meeting, several experts noted that overly complicated eligibility criteria may be confusing Americans and taxing health care providers. The complexity also may be deterring people in lower socioeconomic groups from obtaining boosters, the officials said.

Americans who have opted for boosters “tend to be of higher socioeconomic status and more highly educated, and have more access in general to medical care,” Dr. Gounder said. “That’s not necessarily who’s actually at risk of severe disease, hospitalization or death, and so I think you’re going to have limited public health impact.”

The Biden administration intends to provide booster shots in long-term care facilities and nursing homes, and work with community health centers to reach people with limited access to health care, said Ian Sams, a spokesman at the Department of Health and Human Services.

“As the weather gets colder and people spend more time inside, we are continuing our work to get everyone who is eligible a booster shot,” Mr. Sams said.

There is reason to think more people may choose to get boosters in the coming weeks. While extra shots of the Pfizer-BioNTech vaccine have been available since late September, boosters of the Moderna and Johnson & Johnson vaccines were authorized roughly four weeks ago.

And every week, more Americans will become eligible as they pass the six-month mark since their initial immunizations.

Although federal officials have opted to double down on booster shots as the best hope for ending the pandemic, the scientific questions about their efficacy are far from settled.

Dr. Fauci and other officials contend that protection from the vaccines is now waning over time, in all age groups, even against severe illness and hospitalization.

Israeli health officials are seeing a drop in immunity “not only against infection, but against hospitalizations, and to some extent death,” Dr. Fauci recently told “The Daily” podcast. The trend, he added, “is starting to now involve all age groups — it isn’t just the elderly.”

But other experts disagree, pointing to studies showing that the vaccines remain highly effective against severe illness in adults under 65. The apparent waning of protection against infection may only be due to vaccinated people taking fewer precautions, they say, and to the arrival of the more contagious Delta variant.

Even if they did not provide much additional protection to most adults, booster shots still would be helpful if they helped curb transmission of the virus. Federal health officials have argued as much, citing dropping case numbers in Israel following its booster campaign.

What to Know About Covid Vaccines and Boosters

But in the United States, for reasons not fully understood, infections began falling in September, said Dr. Paul Offit, director of the Vaccine Education Center at Children’s Hospital of Philadelphia and an adviser to the F.D.A. “We were having a decrease here as well before we ever started booster doses,” he said.

A booster shot should prevent people from becoming infected and limit their infectiousness to some extent. Still, some household studies indicate that vaccinated people are about half as likely as unvaccinated people to transmit the Delta variant. Within 12 weeks after the last dose, vaccination’s effect on transmission drops to just 25 percent.

Even a small decrease in transmission provided by boosters “may be important around this winter and holidays,” Dr. Oliver, the C.D.C. scientist, said at the meeting on Friday.

The administration’s time and effort would be better spent getting primary shots to the unvaccinated, said Virginia Pitzer, an epidemiologist at the Yale School of Public Health. “In most places,” she said, “unvaccinated people are still the ones who are driving a lot of the transmission.”

Most experts agree that booster shots benefit adults over 65 and people with weak immune systems. But in the weeks since boosters were authorized, only about 32 percent of older people have received extra vaccine doses.

“I’m seeing a lot of people who would benefit from a third or booster dose who have not yet had their dose,” said Dr. Camille Kotton, an infectious disease physician at Massachusetts General Hospital and an adviser to the C.D.C.

“Some of it is fatigue, some of it is not understanding the new guidance,” Dr. Kotton said. “It’s very hard to understand for whom a booster dose is recommended at this point.”

In Mississippi, Judy Spencer, 76, said she was in good health and did not plan to get a booster, as she had already received two doses of the Moderna vaccine. “I took the shot, I’m glad I did, but I’m through with it,” she said.

The picture for adults under 65 is muddled, and some experts balked at the prospect of extra shots because it was unclear whether the benefit would outweigh the potential risks. Men and boys under 30, in particular, are at slightly increased risk of developing rare and mild heart problems linked to the Pfizer-BioNTech and Moderna vaccines.

Experts said the low rate of boosters to date could be at least partly blamed on the administration’s muddled messaging. In earlier recommendations, the C.D.C. made subtle distinctions between who “should” get the extra shots versus those who “may” opt to do so, and carved out groups of people who should get boosters because of their age, occupations or underlying medical risks.

“C.D.C. speaks Latin,” Ned Lamont, the governor of Connecticut, said at a news conference on Thursday. “I can’t figure out who’s eligible, who’s not eligible.” Going further than officials of other states, he said anyone who was immunized more than six months ago should not consider themselves fully vaccinated.

Dr. Ashish Jha, dean of the Brown University School of Public Health, said, “It’s been very frustrating to watch the national conversation on boosters.” Making boosters available to all adults may ease some of the confusion, he added.

The administration’s single-minded focus on boosters may take much-needed attention away from social distancing, masking and testing, some experts said. “Boosters are just one piece of the puzzle,” said Dr. Kirsten Bibbins-Domingo, chair of the department of epidemiology and biostatistics at the University of California, San Francisco.

“A better public health approach would be to understand that right now, in the face of Delta, we are going to need multiple tools.”

Denial of responsibility! TechiLive.in is an automatic aggregator around the global media. All the content are available free on Internet. We have just arranged it in one platform for educational purpose only. In each content, the hyperlink to the primary source is specified. All trademarks belong to their rightful owners, all materials to their authors. If you are the owner of the content and do not want us to publish your materials on our website, please contact us by email – [email protected]. The content will be deleted within 24 hours.
AdultsboosterCDCCovidEducation newsEducation updateendorsesnews update
Share

The broken link between college and employment (letter) | Inside Higher Ed