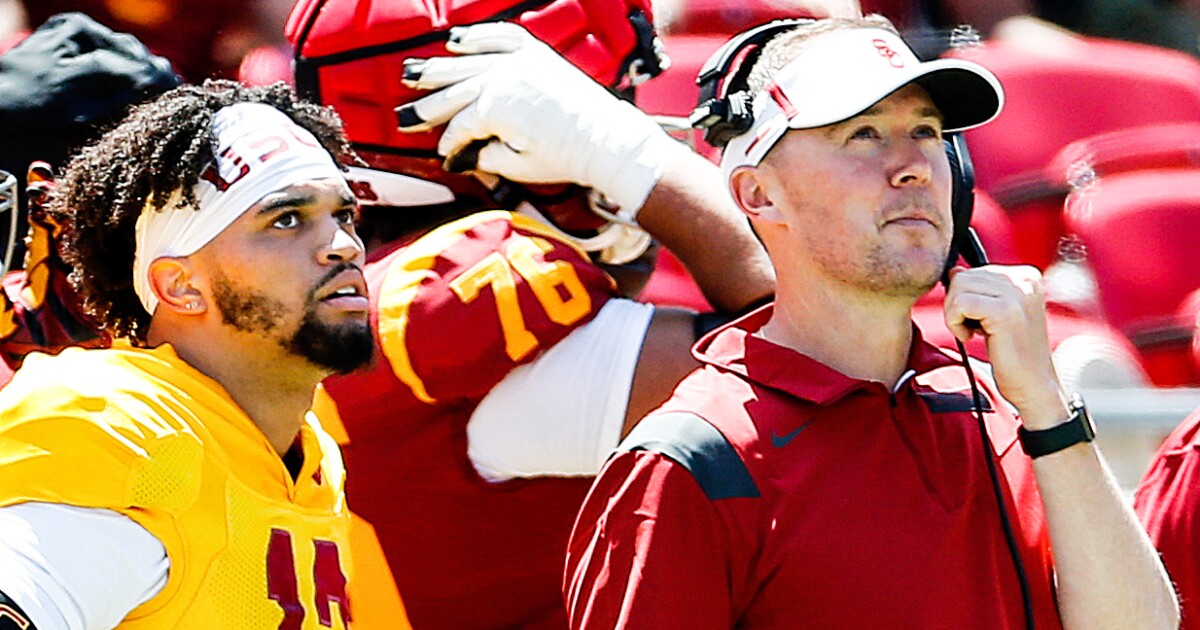 After everything they’d weathered during one year together, all Caleb Williams needed now from his coach was a look from the sideline. A shoulder shrug. A head nod. A thumbs-up. That, the USC quarterback says, would be signal enough for him to know exactly what Lincoln Riley was thinking.

By that point, the USC coach could usually tell what was coming from his quarterback, too.

“The way he walks out on the field, I can almost tell you the kind of day he’s going to have,” Riley said. “I’ve seen now so much, every mannerism and every word. I’ve got to a place where he can tell and I can kinda know what’s in his head even before. And I think he, in a lot of ways, [feels] the same thing with me. I think a lot of times I’m getting ready to make a point to him, whether it’s about playing the position or leading or anything and he can kinda take the words right from me. We’re in lockstep.”

Nothing is more crucial for USC in its first year under Riley than that relationship between the coach and his Heisman contender quarterback, and in Williams’ case, there seem to be no concerns on that front. As the pair enters its second year together, both describe a connection that borders on telepathic. By their telling, it’s not unreasonable to think coach and quarterback could finish each other’s sentences.

“Me and my teammates were laughing about this,” Williams said Wednesday. “We kind of communicate really fast, even when I’m on the field, when he’s on the sideline, thinking through plays and things like that.”

It’s been a few years since Riley has had the luxury of a lasting relationship with his leading passer. Baker Mayfield was the last quarterback to spend multiple years in the coach’s system. His previous three starting quarterbacks at Oklahoma before Williams — Spencer Rattler, Jalen Hurts and Kyler Murray — were each only under center for a season apiece.

In each case, Riley still adjusted his offense accordingly. Two of those three quarterbacks still wound up Heisman finalists at year’s end, and Oklahoma still ranked among the top six in scoring offense during all three seasons.

But the contrast between a quarterback’s first campaign and his second can often be staggering. That potential leap in Year 2 is part of the reason Williams followed Riley to USC in the first place. Instead of learning a new offense, he could spend his time fine-tuning his performance in the same system.

Already, Williams can sense the difference as a sophomore.

“I can see things. I don’t necessarily just have to worry about playing,” Williams said when asked about his progress in Year 2. “I can see things better from the defensive side. I know exactly where everyone has to line up, exactly where they’re going to be on our side. Making sure we get the right runs into certain blitzes or defensive fronts. Making sure we have certain checks. I’ve said it before, I want to be sort of like Coach Riley Part 2 on the field.”

“I trust him completely. There’s not anything in this offense I wouldn’t do, I wouldn’t call with him.”

And in turn, Riley has tried to give his quarterback the freedom to fill that role.

Last season, the coach was especially wary of overloading his star freshman. He didn’t want Williams to think too much on the field.

“I was pretty guarded about that,” Riley said. “It’s just something I believe in with young QBs.”

But that’s no longer the case this season.

“I’ve kind of taken the reins off,” Riley said.

“I trust him completely. There’s not anything in this offense I wouldn’t do, I wouldn’t call with him. Not saying it’s going to be the same schemes, anything like that, but I trust him going into this second year as much as I have any of the other guys. So I think that is probably the biggest point, and then again, like taking away the reins in terms of how we play the game but also just in terms of how I coach him.

“Like I feel like I can coach him with everything and not worry about, ‘Is this going to confuse him? Or is this going to slow him down processing or take away? Like, he can handle it now. There’s just a deeper understanding of what we’re doing, and because of that he’s playing with a lot more confidence.”

That confidence was on display Wednesday, when the USC offense was dragging at practice. Williams took it upon himself to be the spark plug, jolting the group to life and calling on his teammates to get their act together.

“That’s what you want to see from a QB,” wideout Brenden Rice said. “It makes you want to follow him. You want to be behind him and let him lead.”

As Riley sees it, “that’s the best quality [a quarterback] can have.”

“You can be the most talented, gifted quarterback to ever play,” Riley said. “If the other 10 guys aren’t inspired and where they should be around you, it’s not going to matter. He’s got a great ability to do that. I would say right now it’s his defining characteristic.”

Of course, elite talent doesn’t hurt, either. Riley said Williams has vastly improved his footwork since last season, when his arm or his penchant for scrambling often bailed him out of bad situations.

“His consistency level as a thrower has gotten much better as the feet have come along with it,” Riley said.

With both now in lockstep, there’s no telling how far coach and quarterback could take USC’s offense from here.

Denial of responsibility! TechiLive.in is an automatic aggregator around the global media. All the content are available free on Internet. We have just arranged it in one platform for educational purpose only. In each content, the hyperlink to the primary source is specified. All trademarks belong to their rightful owners, all materials to their authors. If you are the owner of the content and do not want us to publish your materials on our website, please contact us by email – [email protected]. The content will be deleted within 24 hours.
CalebHeadingLincolnlockstepnews updateRileysports newssports update
Share

Mapping the brain stem’s control of eating could lead to better treatments for obesity: An atlas of neuronal circuits could help predict targets for medications to control appetite

Sam Bankman-Fried Has Almost Nothing Left After FTX Collapse…