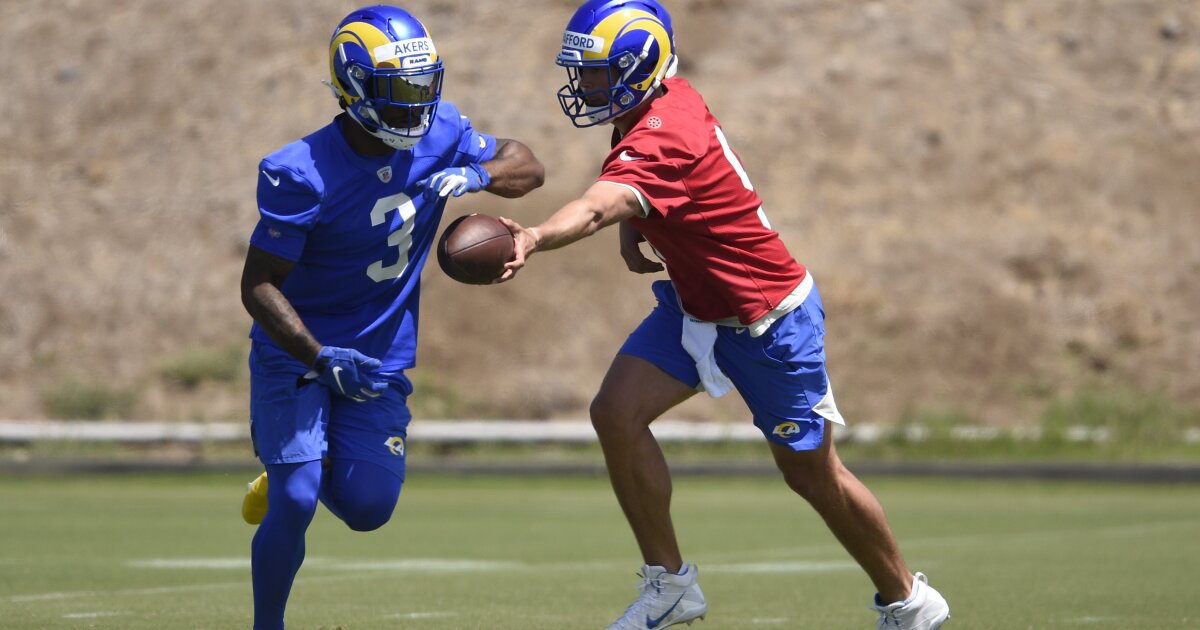 Akers, a second-round draft pick from Florida State, proved a quick study, emerging as the starter for the season opener. Injuries sidelined him for three games, but Akers finished with a dynamic second half and established himself as a key player for a team that, following the addition of quarterback Matthew Stafford, is regarded as a Super Bowl contender.

Akers, who turns 22 on June 22, spent the last few weeks participating in organized-team activity workouts. On Tuesday, the Rams begin a three-day minicamp that will conclude Thursday with a practice before fans at SoFi Stadium.

The Rams’ running back corps also includes third-year pro Darrell Henderson, Xavier Jones, Raymond Calais and rookie Jake Funk. But Akers is the lead back — and comfortable with the status.

“The only thing you can do is prepare and make sure you’re doing all you can to be at your best for your team, so that’s what I’ve been focusing on doing — whether that’s being a leader or making plays,” Akers told reporters. “Just doing what I can do to help this team. I don’t make it more than it is.”

Despite suffering a rib injury in the second game and an ankle injury in the 14th, Akers finished the season with 625 yards rushing and three touchdowns. He gained a career-best 171 yards in 29 carries in a victory over the New England Patriots. He rushed for 131 yards and a touchdown in an NFC wild-card playoff victory over the Seattle Seahawks.

Akers said he has worked this offseason to focus on the mental and physical aspects of his game.

Akers showed his running and receiving skills as a rookie. Now, in Year 2, Akers is expected to master “the detail and what his job entails every single snap,” McVay said.

Akers’ teammates are confident he will continue to progress.

Left tackle Andrew Whitworth has blocked for many running backs in his 15 seasons. It was apparent “early on” that Akers was “really wired the right way,” Whitworth said. Akers displayed confidence by communicating and encouraging older teammates regardless of whether a play went well or poorly.

“He’s not in any way star-struck,” Whitworth said, adding, “He’s just so relaxed back there, like, ‘Man, just got to give me this or that and I’m going to make a play with it.’… That’s a trait and mentality that shows you he’s wired different and he’s somebody that expects to perform well, and I think guys are excited to see him do his thing and continue to grow.”

Last season Akers wore jersey No. 23, but with the NFL relaxing rules on single-digit jersey numbers for the upcoming season, Akers will don No. 3, the number he wore playing youth and high school football in Mississippi and at Florida State.

Akers welcomes the opportunity to help rookies establish themselves, as he did last season.

“I was just in their shoes, trying to solidify a spot and trying to make a name for myself — so I understand and can relate to it a lot,” he said, adding, “I just want to be somebody they can come to and ask questions, and give great advice.”

Denial of responsibility! TechiLive.in is an automatic aggregator around the global media. All the content are available free on Internet. We have just arranged it in one platform for educational purpose only. In each content, the hyperlink to the primary source is specified. All trademarks belong to their rightful owners, all materials to their authors. If you are the owner of the content and do not want us to publish your materials on our website, please contact us by email – [email protected]. The content will be deleted within 24 hours.
Loading...
AkerscamCoveredGroundlotnews updatepandemicRams
0
Share