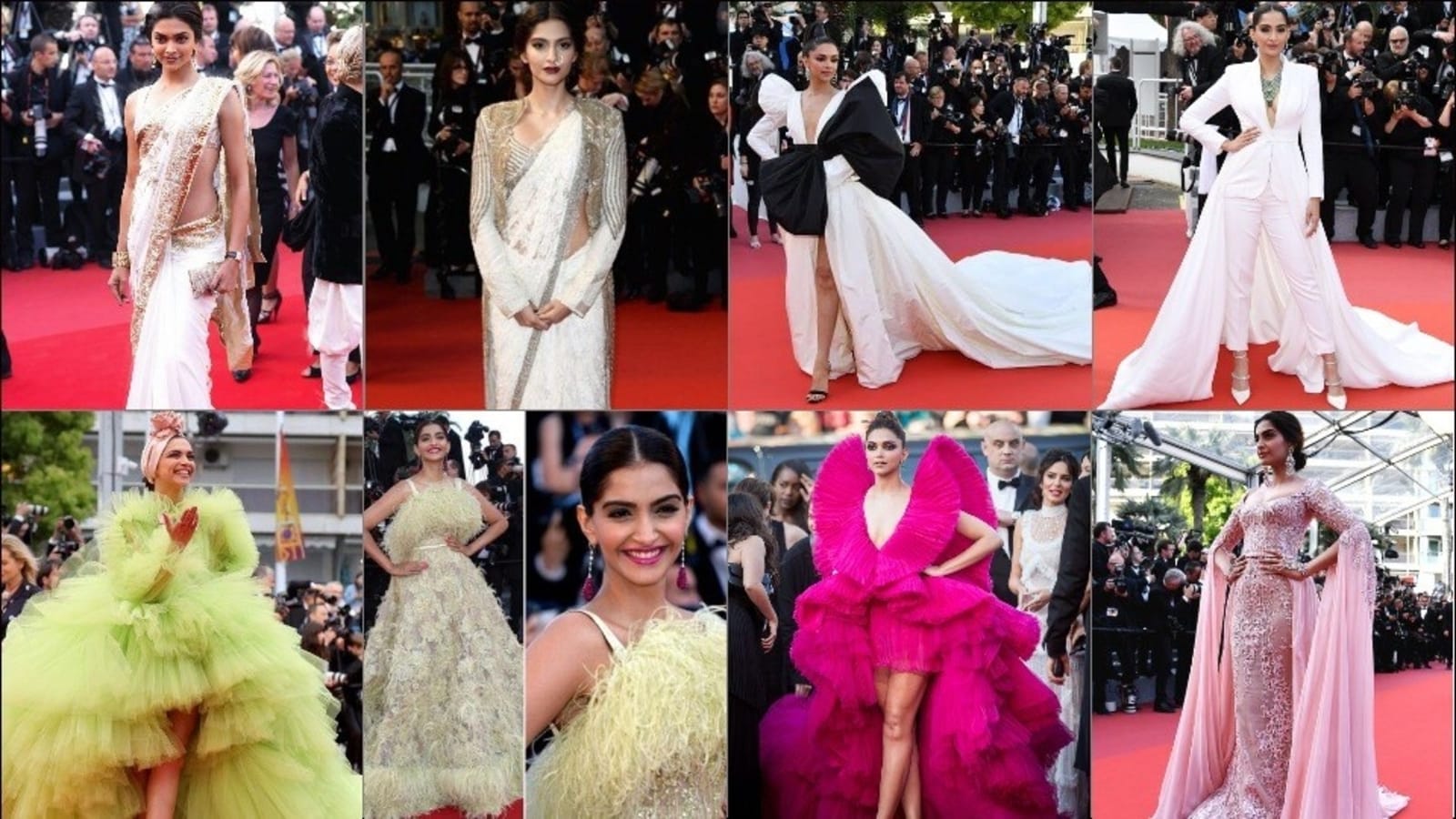 If you have your finger firmly placed on the sartorial pulse, you can vouch for all the times in the past when Bollywood hotties Deepika Padukone and Sonam Kapoor made several iconic and unforgettable appearances at the Cannes Film Festival and won the red carpet fashion. The countdown for the 75th edition of the Cannes Film Festival has begun and though we are excitedly anticipating Deepika’s stunning appearance as a part of the eight-member jury team at Cannes, French Riviera, fashion enthusiasts are dismayed as Sonam gives her staple presence on the biggest extravaganza of world cinema, a miss this year since she is heavily pregnant.

Ahead of Festival de Cannes 2022, which will begin on May 17, here’s looking back at the 13 times the two actors won red carpet fashion at Cannes:

For her Cannes debut in 2010, Deepika decided to go desi and graced the red carpet in a white and golden Rohit Bal saree

For her debut, Sonam did not choose an Indian designer or desi look instead, she made heads turn in a Jean Paul Gaultier couture gown that fell perfectly on her petite frame and accessorised her look with an Amrapali ring and Chopard earrings while she completed her attire with a pair of Ferragamo shoes.

For her second stint at Cannes red carpet in 2012, Sonam experimented with a heavy tulle Alexander McQueen which she wore for the closing ceremony and instantly turned paparazzi’s favourite as it paid off really well.

Sonam stole the show at the Jeune & Julie screening in a beautiful floral strapless bodice Dolce & Gabbana dress that came with oversized flower motifs in the voluminous skirt and was styled with simple side-swept hair. While Sonam completed her attire with a pair of pumps swathed with the same rose print, she accessorised her look with her mother Sunita Kapoor’s neckpiece.

For another appearance, Sonam opted for a stunning lace saree by Anamika Khanna and teamed it with an heavily embellished cape while a nose ring added the perfect amount of drama to the desi look.

Sonam once again went desi at Cannes red carpet and slew in an Anamika Khanna saree, accessorised with a heavy choker and completed with sleek tresses and smokey eyes.

Sonam rocked the red carpet like never before in a light yellow Elie Saab gown.

thinking about how beautiful deepika padukone looked at the cannes film festival 2017. she was literally a fashion icon. ♥︎ pic.twitter.com/WDKjGvERwH

sorry but we couldn’t resist dropping these pictures of deepika padukone from the red carpet of the premiere of loveless at cannes [2017] pic.twitter.com/jiBBmzlHfq

At Cannes 2017, Deepika stole the limelight in a dark purple Marchesta Notte dress. For her second appearance, she opted for an emerald green one-shoulder gown with a sultry thigh-high slit to ooze oomph.

Sonam looked gorgeous in a pink embellished Ellie Saab gown and kept the makeup light to let her ensemble do the maximum talking.

This was her most dramatic and sexy look as she made heads turn in a hot pink gown from Ash Studio. Deepika looked like a vision in a white Zuhair Murad gown at her second appearance on the red carpet.

Since it took place just days after getting married, Sonam’s henna clad hands were in sync with her custom made lehenga by Ralph & Russo and a centre parted braid, accessorised with a traditional parandi. The white choli featured a dramatic long sleeve on one side that mimicked a dupatta.

Now a red carpet sensation, Deepika grabbed a lot of attention for her lime green tulle tiered gown in one appearance and then in a black and white gown by Peter Dundas at Cannes the same year.

This evening, Indian actress and Bollywood sensation Sonam Kapoor wore custom Ralph & Russo to the ‘Once Upon a Time In Hollywood’ https://t.co/e2In6zIiXS pic.twitter.com/VoDUAjSh3a

Sonam gave the classic tuxedo a sultry twist as she opted to go shirtless while her jacket ended in a train that flowed behind her on the red carpet. Her sleek mid-parted tresses were pulled back into a bun and Sonam accessorised her look with a breathtaking Chopard diamond and emerald necklace.

Denial of responsibility! TechiLive.in is an automatic aggregator around the global media. All the content are available free on Internet. We have just arranged it in one platform for educational purpose only. In each content, the hyperlink to the primary source is specified. All trademarks belong to their rightful owners, all materials to their authors. If you are the owner of the content and do not want us to publish your materials on our website, please contact us by email – [email protected]. The content will be deleted within 24 hours.
75th edition of the Cannes Film Festivalcannescannes 2022Cannes Red CarpetcarpetDeepikadeepika padukone cannesDeepika Padukone fashion
Share

When Shah Rukh Khan reached out to a disturbed Johnny Lever,…