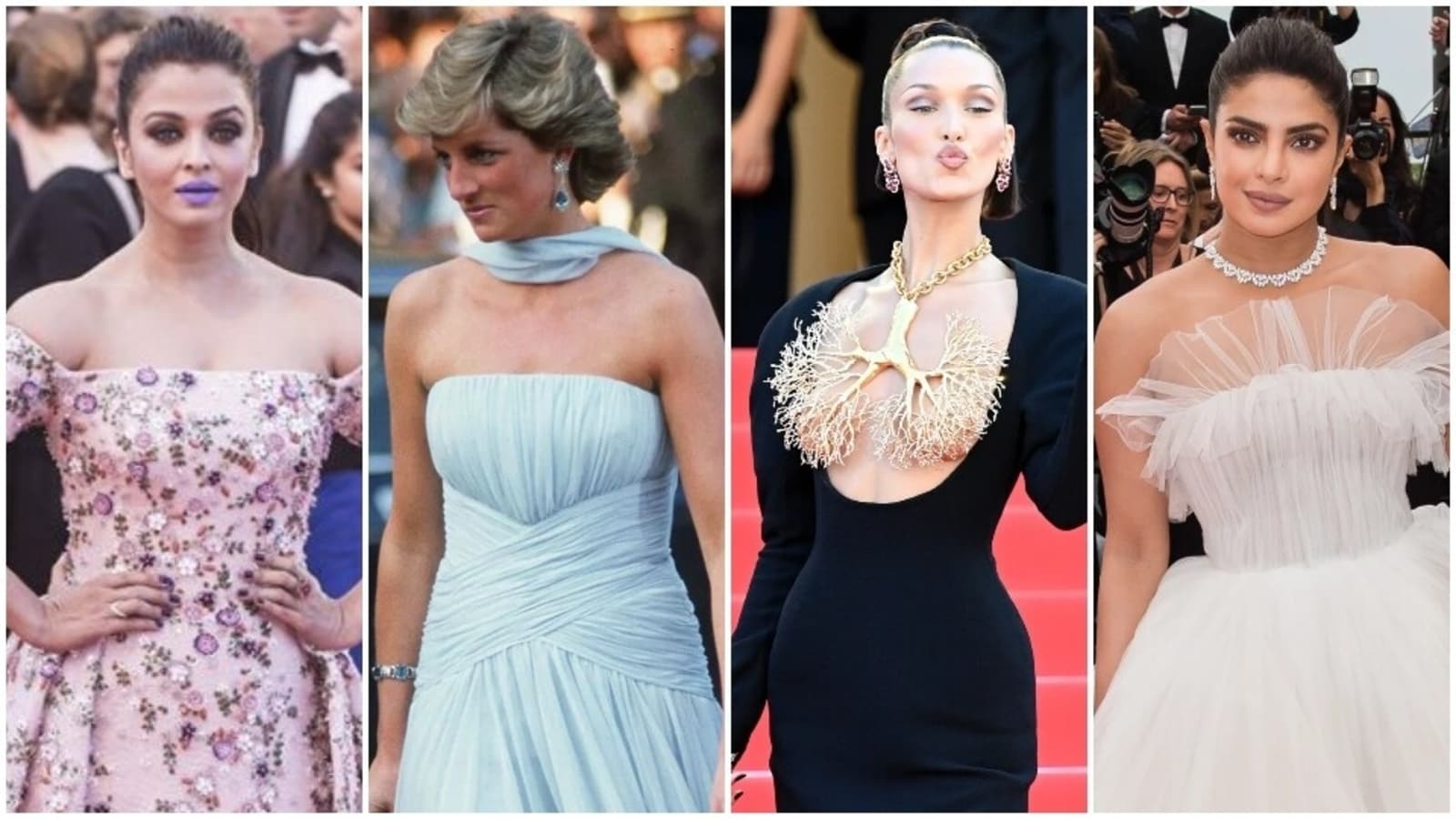 Cannes Film Festival 2022: The Cannes Film Festival, held annually in May, is arguably one of the most fashionable events. The red carpet that rolls out for the biggest celebrities from across the world in the French Riviera town has given the fashion world some of its most iconic and over-the-top moments. Just like Oscars or Met Gala. The lengthy Cannes fashion archives are proof of our statements. So, as one of the biggest film festivals gets ready for another edition this year, we decided to look back at some of the most recent and old unforgettable moments straight from the Cannes red carpet that made the world stop for a moment. From the iconic Princess Diana to Aishwarya rai Bachchan to Priyanka Chopra, here’s a list of six celebrities who made memorable red carpet statements at Cannes, France. (Also Read: Cannes 2022: When Priyanka Chopra and Hina Khan made their grand debuts on the film festival red carpet)

When it comes to Cannes, Aishwarya Rai Bachchan surely knows how to hold the court. The actor has walked the red carpet at the biggest film festival for more than a decade now, and each time she has made headlines for her impressive looks. However, the two instances that will always remain memorable are – the Cinderella gown and the purple lip. While Aishwarya was praised in 2017 for the Cinderella-esque couture gown by Michael Cinco, her purple lip became the centre of memes a year before that. Much to everyone’s surprise, in 2016, Aishwarya shocked many as she walked the red carpet in an off-shoulder floral applique Rami Kadi dress teamed with the purple lipstick.

One of Princess Diana’s most famous appearances has to be when she attended the Cannes Film Festival in 1987 with Prince Charles in a shoulder-baring strapless gown. The Royal wore a gorgeous blue chiffon dress by Catherine Walker teamed with a matching long drape placed on her shoulders. It was, reportedly, meant as a homage to the gown Princess Grace of Monaco wore in Alfred Hitchcock’s To Catch a Thief. The People’s Princess literally glowed in the ensemble and proved why she is still remembered for her iconic sartorial choices.

Bella Hadid’s appearance on the Cannes Film Festival red carpet has always been the talk of the town. However, three of the supermodel’s ensembles will remain unforgettable for us – the vintage Jean Paul Gaultier column gown, the Schiaparelli dress with a naked bust covered with a gold necklace, and the ultra-sexy Alexandre Vauthier’s almost-naked couture dress. The gilded gold necklace she wore to cover her breasts became a show-stopping Cannes moment. As for the white and black look, Bella paid homage to supermodel Naomi Campbell in the vintage ensemble that featured a dramatic tulle train. Lastly, Bella’s debut in the red gown with a risque thigh-slit set the red carpet on fire.

Deepika Padukone has had many striking moments on the Cannes Film Festival red carpet. However, her fuchsia pink Ashi Studio gown from their Spring/Summer ’18 collection served an iconic larger-than-life moment. Even Beyonce later wore the same ensemble to attend an event. The dress featuring large power shoulders and the ruffled floor-sweeping train was all about high octane drama.

This list will be incomplete without Priyanka Chopra’s debut. The Matrix actor turned up on the Cannes red carpet a few months after her wedding, dressed in a literal white bridal gown accompanied by her husband, Nick Jonas. And the moment still remains unforgettable. She wore a strapless tulle gown by Georges Hobeika featuring layers of sheer tulle overlay and a long train. A pair of diamond drop earrings, necklace, metallic heels and bold makeup completed her white-wedding look.

Last year, influencer Diipa Buller-Khosla made a powerful statement on motherhood at the Cannes Film Festival. She had added breast pumps to her strapless gown. Diippa posted a picture of herself on Instagram that showed her sitting on the staircase sporting breast pumps on top of her black and yellow tulle gown. She even penned an unapologetic note on being a mother, juggling careers with other responsibilities, and more. Her message garnered love from netizens and sparked conversations online.

Which Cannes moment remains unforgettable for you?

Denial of responsibility! TechiLive.in is an automatic aggregator around the global media. All the content are available free on Internet. We have just arranged it in one platform for educational purpose only. In each content, the hyperlink to the primary source is specified. All trademarks belong to their rightful owners, all materials to their authors. If you are the owner of the content and do not want us to publish your materials on our website, please contact us by email – [email protected]. The content will be deleted within 24 hours.
Aishwaryaaishwarya rai at cannesAishwarya Rai Bachchanaishwarya rai bachchan purple lips cannesaishwarya rai cannes fashionaishwarya rai cannes unforgettable momentsaishwarya rai michael cinco cinderella dressbella
Share

McDonald’s to Exit From Russia After Three Decades

Covid strikes All Blacks again with Will Jordan out of…