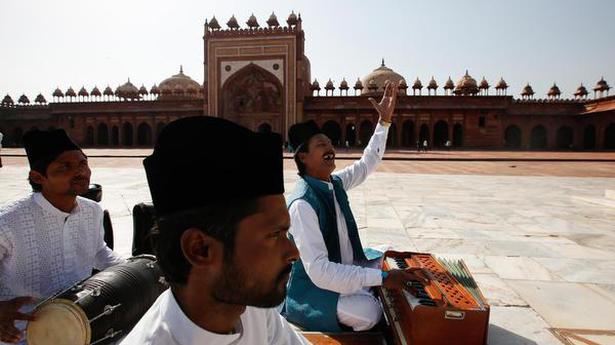 Capturing the spirit of qawwali through images

Electric, spirited and earnest are some of the adjectives we readily associate with a qawwali performance. Can these emotions be captured through static images? Well, an ongoing photo exhibition at Delhi’s India International Centre showcases the moments when qawwals become the voice of the hundreds of devotees who throng the shrine, seeking grace. Capturing the artistes at traditional performance sites reminds one of how deep and profound are also the words that we relate with this art form.

Conceptualised by Kathak exponent Manjari Chaturvedi, who has done extensive research on Sufi music as part of her decade-old Qawwali Project, the images capture practitioners with their families, in their everyday lives, and in their interactions with audiences.

Manjari describes the project as the first-ever photo documentation of the dwindling art form. “The qawwals of the subcontinent have largely remained faceless. Of course, people associate with their names and the music, but not the faces of the artistes. This is what led to the launch of this project, to show the real faces behind this music,” says Manjari.

Manjari has roped in three top photographers — Dinesh Khanna, Leena Kejriwal and Mustafa Quraishi — who bring an outsider’s perspective to the art form that migrated to India from Central Asia but, as Manjari says, was soaked in the colours of Indian diversity in more ways than one.

The images reflect how, over the years, musical instruments became an integral part of qawwali, drawing audiences from a cross-section of society. Qawwali appeals to not just the well-heeled who throng the Nizamuddin dargah, it reaches out to those living on the margins in shrines across the country. As a result, the deep thoughts in the songs are expressed in the common man’s language, whether Lakhnavi or Dakkhani Urdu, Punjabi or Awadhi.

Manjari points out that the images of the qawwali practitioners have been shot amidst people, in an organic, non-commercial milieu.

While doing the project, Dinesh says he discovered there is much more to qawwali than what he had seen in cinema and popular culture. “It took me to my roots in Punjab, where most mazaars are patronised by Sikhs and Bulleh Shah’s kalam in Punjabi seamlessly finds its way into qawwali.” In fact, one of his most abiding images is that of Ustad Ranjhan Ali performing at Baba Hussain Shah Qadri’s shrine in Raja Sansi town of Amritsar, where temple bells could be seen in the background.

Leena recounts the first qawwali she covered at the Nizamuddin Dargah and how “the beautiful mahaul (ambience) and energy” inspired her as a photographer. “I realised that I didn’t want to make my images too static. The air is charged, especially during the Urs (death anniversary of a Sufi saint),” says Leena, known for her seminal work, ‘Calcutta: Repossessing the City’.

Dinesh, who is the co-founder of Delhi Photo Festival, says he has still not found an answer to how such an energetic art form can be turned into a static image, but notes that instead of one photo, one should observe it as a series of images forming a photo story.

Women performers have been traditionally kept out of qawwali, and Manjari cites the legend of Dhai (two-and-a-half) Qalandar involving three Sufi saints — Hazrat Lal Shahbaz, Hazrat Bu Ali Sharfuddin and Hazrat Rabia Basri. “The male saints constitute two Qalandars, while Rabia constitutes only half because of her gender. So it is important to document the work of women artistes, who are breaking barriers to perform qawwali.” Leena brings this aspect out through her vibrant images. She followed Chanchal Bharti to Muzaffarpur in Bihar. “It took me to a part of the world that I would not have otherwise visited. When I reached there, her qawwali started late in the night. It gave me enough time to hang around and get a feel of the atmosphere. It was a shrine visited by people belonging to different religions. The devotion with which the qawwal and listeners immersed themselves in the music was mesmerising.” In another instance, one morning, Leena photographed young girls, with scarves around their necks and wearing lipstick, performing at Hazrat Inayat Khan Dargah in New Delhi. “Excited, I captured them on my camera both before and after the performance. It was a beautiful experience.”

Technology, as Manjari says, at times dehumanises the music, makes us forget the artiste and remember only the sound. This exhibition removed some of that anonymity that surrounds the qawwali singers.

(The Qawwali Photo Project is on view at India International Centre, New Delhi, until November 28.)

Denial of responsibility! TechiLive.in is an automatic aggregator around the global media. All the content are available free on Internet. We have just arranged it in one platform for educational purpose only. In each content, the hyperlink to the primary source is specified. All trademarks belong to their rightful owners, all materials to their authors. If you are the owner of the content and do not want us to publish your materials on our website, please contact us by email – [email protected]. The content will be deleted within 24 hours.
Capturingentertainment newsEntertainment updateIICimagesNew Delhinews updatephoto exhibition capturing the spirit of qawwali
Share

Biden’s Covid vaccine mandate will likely go to the Supreme Court. Here’s how the courts have ruled before