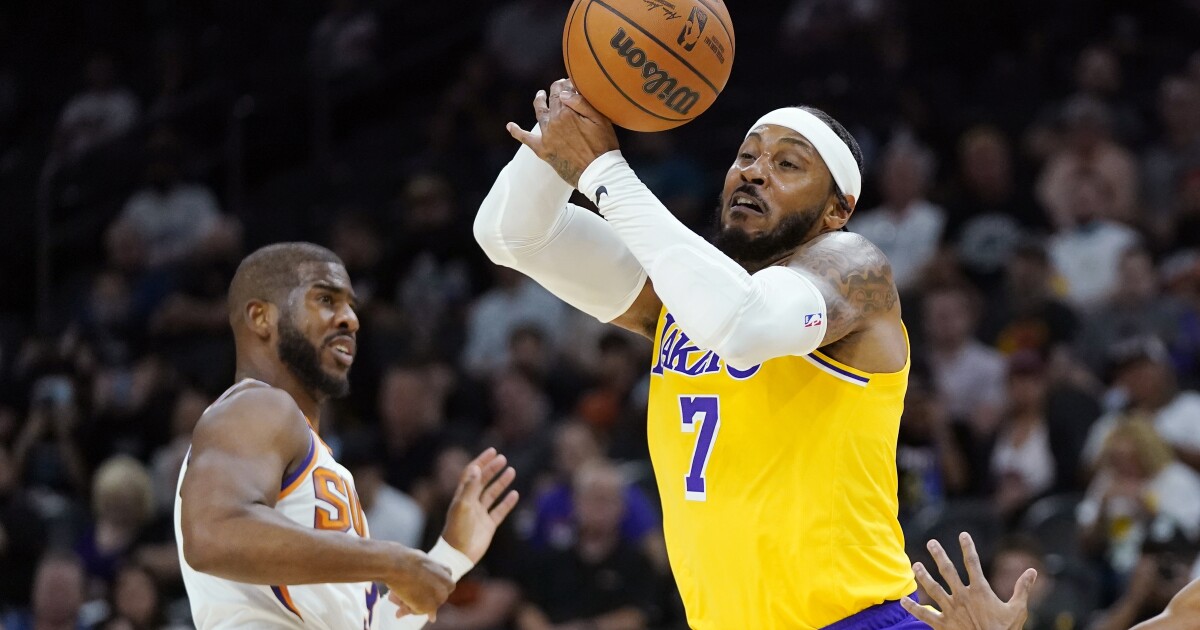 Of all the ways for Carmelo Anthony to make his Lakers debut, this was a strange one.

Playing on a court with a WNBA logo in the center in the middle of the afternoon on a Wednesday, Anthony finally stepped onto the floor in Lakers’ gold to start his 19th NBA season.

Ceding their prime-time spot to the more deserving WNBA conference finals, the Suns and Lakers continued their preseason in Phoenix, with L.A. losing 117-105.

Anthony’s Lakers’ debut, though, took precedent over any result, the Lakers getting a glimpse at what the 37-year-old forward could add this season.

He played 17 minutes and scored eight points on 10 shots — only one coming from beyond the three-point line.

“At this point in the season, I think at this part, it’s just figuring it out and getting the kinks out and trying to get everybody back on the court at one time,” Anthony said.

He and Anthony Davis got their first in-game action together and there were some bumps, which was to be expected.

“There was a little hesitation from both of us,” Davis said. “We’ve never played with each other before, so we’re trying to figure that out. But we’re constantly talking to each other, got the bench talking to us. The more we communicate what we want to do, the easier it’ll be as the season progresses.”

The optimized version of Anthony, though, still hasn’t been unveiled. He, as with most of the Lakers’ offseason acquisitions, is designed to best contribute around LeBron James, Russell Westbrook and Davis.

And for the second straight game, Davis was the only member of the Lakers’ big three to play, the team and Frank Vogel committed to playing their most important players only as much as needed this preseason.

In addition to James and Westbrook sitting out, the Lakers rested center Dwight Howard. Down a big man, Vogel started Davis at center alongside Anthony, Wayne Ellington, Kendrick Nunn and Talen Horton-Tucker. The Suns played their regulars, including Chris Paul, with the exception of Devin Booker.

The edited roster is undoubtedly responsible for a portion of the Lakers’ struggles for the second straight game. Although preseason game No. 2 is no time for panic, the Lakers were badly outrebounded again.

With Westbrook and James sidelined, the Lakers struggled to employ a playmaker beyond Rajon Rondo, the ball stuck too often with guards such as Horton-Tucker and their defense softened drastically after forcing turnovers early.

“Some things that we have to work out, things we need to work on, we will work on. But once you get the group back intact then you start seeing what’s going on, what’s happening, what we need to get better at.”

In other news, Trevor Ariza, who hasn’t practiced with the Lakers since the first day of training camp, will miss at least eight weeks after ankle surgery.

Ariza, 36, signed with the Lakers this summer and was a candidate to start.

The team announced Ariza had an “ arthroscopic debridement procedure performed” on Wednesday.

The Lakers say he’ll be reevaluated in eight weeks.

Denial of responsibility! TechiLive.in is an automatic aggregator around the global media. All the content are available free on Internet. We have just arranged it in one platform for educational purpose only. In each content, the hyperlink to the primary source is specified. All trademarks belong to their rightful owners, all materials to their authors. If you are the owner of the content and do not want us to publish your materials on our website, please contact us by email – [email protected]. The content will be deleted within 24 hours.
AnthonyCarmeloFeetLakersLossnews updatepreseasonsports news
Share