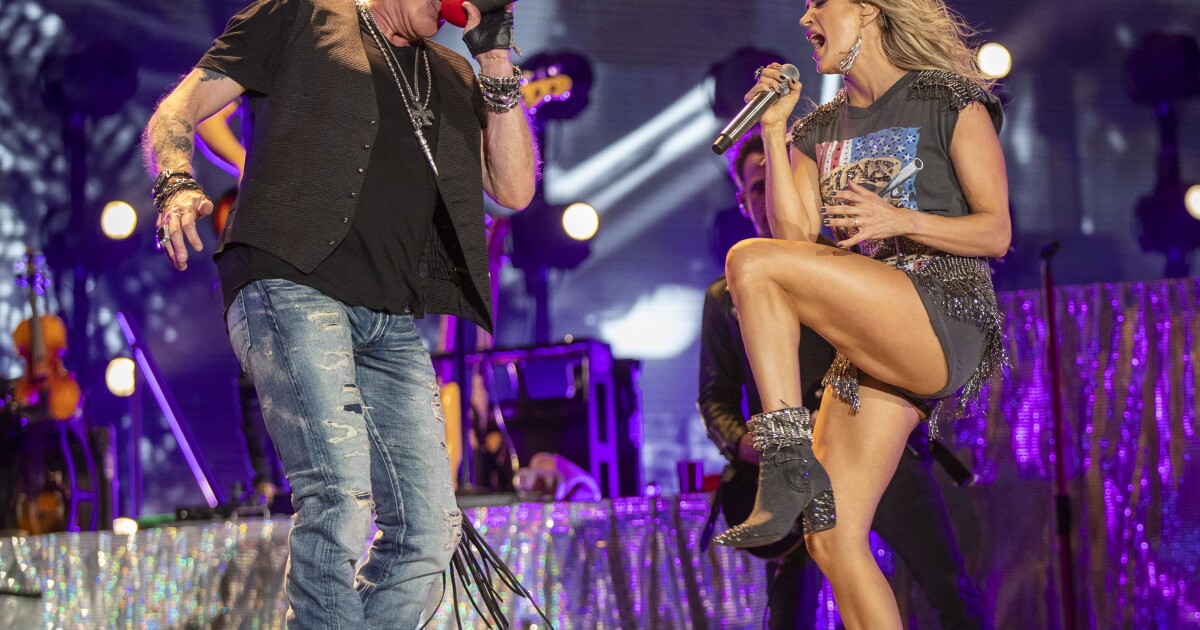 When Carrie Underwood does a big song — and for this superstar of theatricalized country music, they’re all big songs — she bends over slightly at the waist, tilting her upper body toward the ground, while she sticks her left arm out behind her as though to steady herself.

The pose makes for dramatic images, as the former “American Idol” winner certainly understands. But given how hard she sings, it might also be a physical necessity: Headlining the Stagecoach country festival on Saturday night, Underwood sent her voice booming out over the expanse of the Empire Polo Club in Indio, Calif., with such intensity that you could see the veins popping out from her forehead.

And that was before Axl Rose of Guns N’ Roses turned up for a surprise cameo that literalized the hair-metal heritage in Underwood’s music — and led the 39-year-old to pronounce Saturday “the greatest night of my life.”

Together with Underwood’s all-sparkle-everything wardrobe, including a bedazzled GNR romper she wore in honor of her special guest, the singer’s vocal athletics mark her as a clear successor to the larger-than-life pop-country divas of the 1990s and early 2000s. But if she’s hardly alone in her millennial’s admiration for Faith Hill and Shania Twain, she is perhaps the only Nashville star on her level upholding their once-dominant aesthetic. (Consider that Twain, who headlined Stagecoach in 2017, returned to the desert recently not for Stagecoach but for Coachella, where she appeared with Harry Styles.)

For young women coming up in country music today, Underwood’s generational peer and onetime duet partner Miranda Lambert exerts a much stronger influence: An expert songwriter with a more freewheeling and off-the-cuff attitude, Lambert is the one you can hear and see in Lainey Wilson and Hailey Whitters and Morgan Wade. Not unlike other genres in the social-media era, country has moved away from pageantry toward relatability; even the discourse surrounding Dolly Parton, no less a crucial figure to Lambert than to Underwood, has shifted to emphasize Parton’s ingenuity and self-determination over her flair for showbiz razzle-dazzle.

All of which leaves Underwood in an interesting position as she prepares for the release of her first big studio album (not counting a Christmas disc and a gospel one-off) since 2018’s “Cry Pretty.” Due in June, the new LP is titled “Denim & Rhinestones,” which says plenty about Underwood’s faith in her approach.

Introducing the album’s title track Saturday — a glossy ’80s-throwback bop with echoes of Whitney Houston and Fleetwood Mac — she indicated her flashy outfit and told the crowd, “I practice what I preach, people.”

“Ghost Story,” the LP’s sweeping lead single, hasn’t immediately taken off on country radio (though a very Lady Gaga-and-Bradley Cooper-ish duet with Jason Aldean, “If I Didn’t Love You,” topped Billboard’s Country Airplay chart last year). Yet Underwood, who has a popular residency at Resorts World in Las Vegas, could still draw tens of thousands of people to her set at Stagecoach, where the weekend bill also featured Thomas Rhett, Brothers Osborne, Luke Combs, Margo Price and Maren Morris.

What’s enabled Underwood to keep connecting even as country music changes around her — beyond the simple spectator-sport pleasure of listening to someone peg a high note, then hold it for ages — is the tricky balance she strikes between earnestness and camp. Seemingly half of Underwood’s songs enact pulpy revenge fantasies against no-good men, and here she made hay of the melodrama in “Church Bells” and “Blown Away” and the immortal “Before He Cheats” while somehow honoring the emotional weight of the real-life struggles women like her characters face.

She found the pathos in the shopworn clichés of “Cry Pretty,” which featured actual fireworks to go along with the metaphorical kind. And she mashed up “Jesus, Take the Wheel” — a bumper sticker in search of a song — with a bit of the Christian hymn “How Great Thou Art” to surprisingly moving affect. A choir flanked the singer for that one, then stuck around for “See You Again,” which Underwood dedicated to Naomi Judd, whose death was announced Saturday. (Before Underwood on the festival’s main stage, Brothers Osborne offered their own tribute with a close-harmony rendition of the Judds’ “Why Not Me.”)

It wasn’t that Underwood was looking for something deeper than the bombast in her music; rather, she was using the power of her voice — its muscular low end and especially her moaning upper register — to bring the bombast to life.

Considering how well she sang, you had to wonder if Rose had bitten off more than he could chew by agreeing to join Underwood for two GNR classics near the end of the gig. In fact, the 60-year-old frontman, who hasn’t been seen much since his band finished a leg of its lengthy comeback tour last fall, nailed the winding melodies and staccato rhythms of “Sweet Child O’ Mine” and “Paradise City” with precision and just the right amount of villainous charm.

Clutching one of his signature clown-nose microphones, his swept-back hair blowing in the desert wind, Rose snake-shimmied across the stage, a little slower than in the old days but wearing a grin that suggested he was having a ball.

Denial of responsibility! TechiLive.in is an automatic aggregator around the global media. All the content are available free on Internet. We have just arranged it in one platform for educational purpose only. In each content, the hyperlink to the primary source is specified. All trademarks belong to their rightful owners, all materials to their authors. If you are the owner of the content and do not want us to publish your materials on our website, please contact us by email – [email protected]. The content will be deleted within 24 hours.
AxlbombastBringsCarrieentertainment newsEntertainment updategrinningnews update
Share

Trade Setup: Nifty may make a negative start to the week; stay light

A roof over their head: Churches use tiny homes for homeless

Neha Bhasin: I thought I will never be an international pop…

No honorarium for regular college staff to run self-financed…