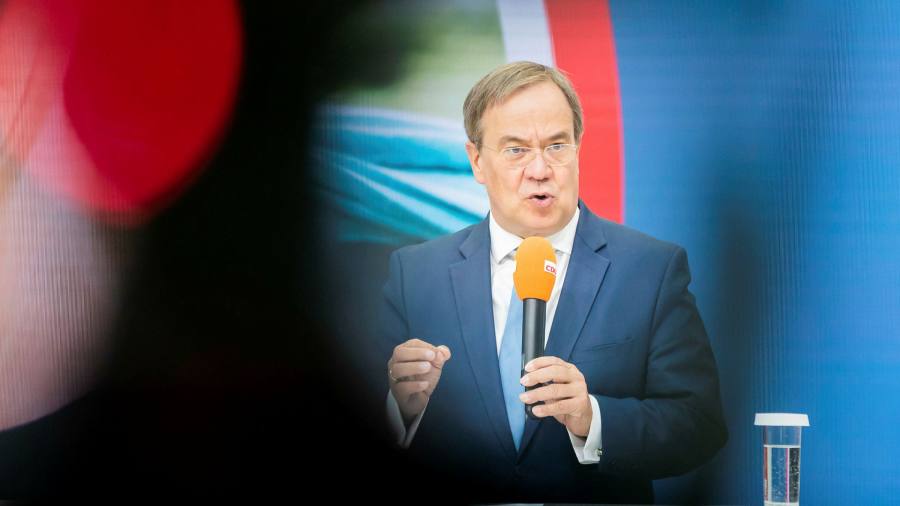 Sign up to myFT Daily Digest to be the first to know about German politics news.

Armin Laschet, leader of Germany’s conservatives, sought to reboot his stuttering campaign to succeed Angela Merkel as chancellor by naming eight experts to advise him on issues ranging from climate change to security.

Laschet said the four women and four men represented the diversity of Germany and his conservative bloc, the CDU/CSU.

The candidate is trying to revive his flagging fortunes. With just over three weeks to go till Germany’s federal elections, the CDU/CSU has been overtaken in the polls by the left-of-centre Social Democrats, whose pick for chancellor, finance minister Olaf Scholz, enjoys far higher approval ratings than Laschet.

In introducing his experts, Laschet challenged the SPD to present its team. “I am especially looking forward to seeing in the next few days what other personalities the SPD has to offer,” he said. “There are a lot of people hidden away at the moment.”

CDU politicians accuse the Social Democrats of deliberately muzzling their party leaders, Saskia Esken and Norbert Walter-Borjans, who beat Scholz in a contest for the SPD leadership in 2019 and are considered much more leftwing than the finance minister.

As pressure mounts on Laschet to arrest the CDU’s decline, he has warned of the dangers of a leftwing government bringing together the Social Democrats, Greens and Die Linke, a hard-left party that has its roots in the East German communist party. He said on Friday he would fight to ensure “that September 26 won’t lead to a leftwing alliance in Germany”.

Angela Merkel made a rare intervention in the campaign this week, attacking Scholz for refusing to rule out a coalition with Die Linke.

The experts Laschet announced on Friday include Friedrich Merz, a millionaire corporate lawyer who lost to Laschet in the contest for the leadership of the Christian Democrats in January but enjoys broad support among the CDU’s rank-and-file.

Merz will advise Laschet on finance and the economy. He told reporters on Friday he backed balanced budgets, a “stable euro” and Germany’s constitutional restriction on new borrowing.

The team of experts also includes Dorothee Bär, a state secretary for digital affairs, and Peter Neumann, a terrorism expert who is professor of security studies at King’s College, London.

Others include Karin Prien, education minister of the northern state of Schleswig-Holstein; Barbara Klepsch, Saxony’s culture minister; Silvia Breher, deputy chair of the CDU; Andreas Jung, deputy leader of the party’s parliamentary group; and Joe Chialo, a music manager who is running for a seat in the Bundestag.

Loading...
Denial of responsibility! TechiLive.in is an automatic aggregator around the global media. All the content are available free on Internet. We have just arranged it in one platform for educational purpose only. In each content, the hyperlink to the primary source is specified. All trademarks belong to their rightful owners, all materials to their authors. If you are the owner of the content and do not want us to publish your materials on our website, please contact us by email – [email protected]. The content will be deleted within 24 hours.
campaignCDUsEducation newsEducation updateLaschetMerkelnews updatePolls
Share