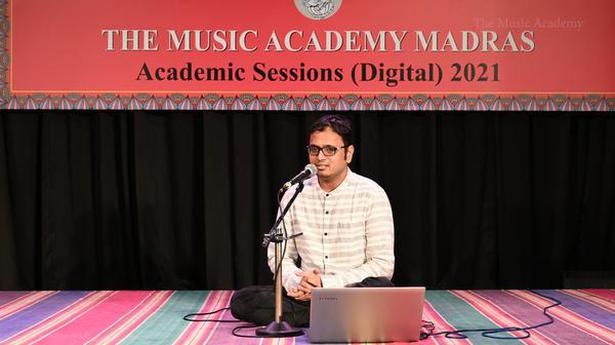 To celebrate the birth centenary of the well-known nagaswaram vidwan Karukurichi P. Arunachalam, the Music Academy hosted a lec-dem on his life and music.

Dividing the lec-dem into two segments — one part as biography and the other music — Lalitharam Ramachandran, spoke about the musician with passion and involvement.

The prayer song ‘Thyagaraja Mahadhwajaroha’ in Sriragam, rendered by Magizhan Paridhi, a student of Advanced School of Carnatic Music, The Music Academy, Madras, which clearly mentions the name of the instrument as ‘nagaswara’ and not ‘nadhaswara’ as it is commonly known , formed a prelude to the interesting lecture .

“Arunachalam’s tutelage under maestro T.N. Rajarathinam Pillai was an interesting incident when the guru chose his sishya instead of vice-versa,” said Lalitharam, adding that it was an incredible journey for the student, who started his career in nayyandi melam and became a nagaswaram artiste.

Talking about the period of Arunachalam’s ascent to fame during the 1950s, Lalitharam recalled an incident, when Jawaharlal Nehru, present at the inauguration of a cement factory, declared that he knew that the crowd gathered there was only for Karukuruchiyar’s nagaswaram recital that was to follow.

Lalitharam interspersed his talk with excerpts chosen from many recordings to bring forth Arunachalam’s aesthetics and virtuosity in playing the nagaswaram. The lec-dem began with a clipping of Karaharapriya raga alapana, and later when the recording of a five-minute-long alluring Vachaspati raga exploration was played, the viewers had the chance to enjoy the different dynamics of the instrument and the karvais combining the vaadi and samvaadi phrases without repetition.

With a clip from a recording that resonated with the incandescence of Husseni raga with the original Carnatic flavour, Lalitharam pointed to the panchamam in the lower octave that forges imagery of the brass section of an orchestra, which is referred to as the ‘bomb sound’ among nagaswaram artistes.

While raga elucidation formed the major part of Arunachalam’s repertoire, Lalitharam highlighted the clarity of sahitya when he played, which closely replicated the vocal music, including the discipline of playing each sangati twice. Though the presenter could not find any recording of the maestro playing a Mallari , he quoted Meenakshi Kambar, a nagaswaram player, who had heard the ‘ther mallari’ during the deity’s procession at Tiruchendur temple, where Arunachalam used to play nagaswaram every year on the 7th and 8th day of the annual festival.

Explaining the style of free-flowing raga display, Lalitharam shared a snippet of Mohana raga that was neither an alapana nor a kalpanaswaram, but as one which came between the pallavi and anupallavi of a kriti. Talking about the musician’s immense creativity, he referred to a series of concerts at the family wedding of Vedaranyam Vedamurthy, another brilliant nagaswaram vidwan of the time, where Arunachalam was the last of the vidwans to play, and how he elaborated the lines ‘Kannaththil mutthamittal’ in the popular Bharatiyar song, ‘Chinnachiru kiliye.’

In the sample piece for a kalpanaswaram, Lalitharam chose a portion of Shanmukhapriya from a recording that did not conform to any particular speed but was in a fluid style. A clip from the recording of a short Anandabhairavi that gets back to the main raga Thodi, illustrated the style of playing ragamalika swaras seamlessly.

Lalitharam also spoke about Karukurichi M. Arunachalam, who accompanied the genius; the duo was referred to as ‘Karukurichi Brothers’ in their times. Karukurichi M. Arunachalam, who stopped playing nagaswaram after the demise of his musical companion in 1964, was equally adept in the art. Lalitharam also talked about the maestro’s efforts to set up a music school in Kovilpatti, which has not materialised to date, and hoped that it might come up in this centenary year .

The lec-dem also had references to Karukurichi Arunachalam’s proximity to the film world, where he rose to fame with the song, ‘Singara velane’ (where singer S. Janaki sang in tandem with Arunachalam’s nagaswaram). Lalitharam concluded the lecture by playing Karukurichiyar’s Chenchurutti thillana from the same movie with a folk slant.

The lec-dem was a fount of information for those who are interested in the life and music of Karukurichi Arunachalam.

It is available for viewing on the YouTube channel of The Music Academy Madras at https://youtu.be/7wNolayLuBM

The writer specialises in Carnatic music.

Denial of responsibility! TechiLive.in is an automatic aggregator around the global media. All the content are available free on Internet. We have just arranged it in one platform for educational purpose only. In each content, the hyperlink to the primary source is specified. All trademarks belong to their rightful owners, all materials to their authors. If you are the owner of the content and do not want us to publish your materials on our website, please contact us by email – [email protected]. The content will be deleted within 24 hours.
Arunachalamcarnatic musicCelebratingentertainment newsEntertainment updategeniusKarukurichiKarukurichi M. Arunachalam
Share