Notice: amp_is_available was called incorrectly. `amp_is_available()` (or `amp_is_request()`, formerly `is_amp_endpoint()`) was called too early and so it will not work properly. WordPress is currently doing the `pre_get_posts` hook. Calling this function before the `wp` action means it will not have access to `WP_Query` and the queried object to determine if it is an AMP response, thus neither the `amp_skip_post()` filter nor the AMP enabled toggle will be considered. It appears the theme with slug `publisher` is responsible; please contact the author. Please see Debugging in WordPress for more information. (This message was added in version 2.0.0.) in /home/runcloud/webapps/techilive/wp-includes/functions.php on line 5313
 ‘Chaavu Kaburu Challaga’ movie review: A diluted plot spoils the party - TechiLive.in 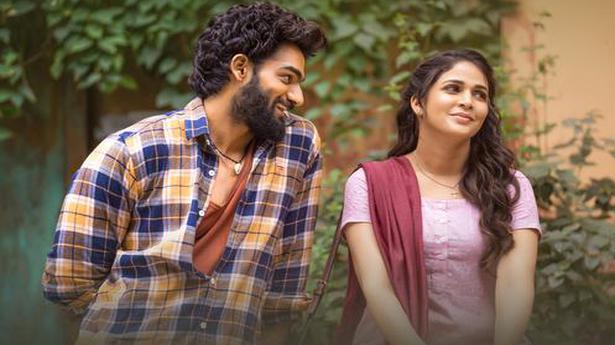 This Karthikeya, Lavanya Tripathi and Aamani film has a promising storyline, but doesn’t make a mark

Basthi Balaraju (Karthikeya) drives a hearse and his mother (Aamani) sells corn for a living. Married at 14, her son, born a year later followed by her husband becoming paralytic, she has seen it all. While the mother and son share a good rapport, sharing drinks and troubles, Balaraju also spends time stalking nurse Mallika (Lavanya), professing love. The hitch here is he proposes to Mallika on the same day he is summoned to take the latter’s husband to the graveyard. The widow is initially shocked, perplexed, angry but over a period of time begins to understand him.

Director Kaushik Pegallapati shows Aamani dating a television mechanic (Srikanth Iyengar) and Balaraju wooing a woman whose husband had just died. The director, instead of making this the peg of the film, dilutes the story. When Balaraju picks up a fight with his mother, she sits him down and explains her side of the story but there is no argument or debate as to why she cannot have a relationship with someone else other than her husband. He, however, stresses that one should hold memories of the past but shouldn’t let that effect the present. There is an overdose of Karthikeya and he is there in almost every frame.

The story of Chaavu Kaburu Challaga (CKC) had great scope to elevate sentimental scenes but the actors fail in delivering the right expressions. Barring Murali Sharma, Srikanth Iyengar, the rest of the cast don’t convey their pain well. The songs are well placed, lyrics are wonderfully written and dialogues sparkle here and there. “He is my new daddy,” says Karthikeya while introducing Srikanth Iyengar to someone. The narration is uneven, at times we feel the conflict point in the story is missing which is why we don’t empathise with anyone. Suneel Reddy and Karm Chawla’s work behind the camera is a treat. Production design is apt.

There was lot of room for melodrama and debate revolving Aamani which could have taken the film to another level but that doesn’t happen. Director of CKC shows promise but doesn’t quite capitalise on the novel points in his story.

Loading...
Denial of responsibility! TechiLive.in is an automatic aggregator around the global media. All the content are available free on Internet. We have just arranged it in one platform for educational purpose only. In each content, the hyperlink to the primary source is specified. All trademarks belong to their rightful owners, all materials to their authors. If you are the owner of the content and do not want us to publish your materials on our website, please contact us by email – admin@techilive.in. The content will be deleted within 24 hours.
ChaavuChaavu Kaburu Challagachaavu kaburu challaga movie reviewChallagadilutedentertainment newsEntertainment updateKaburu
0
Share