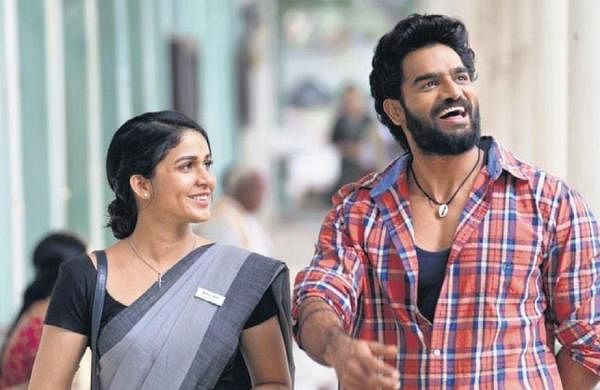 For many of us, watching a film is an emotional and enriching experience as many-atime we tend to identify ourselves with the onscreen characters. But not every movie has the potential to tug at the heartstrings.

There’s no denying that one can not understand human affairs without laughing or crying. Chaavu Kaburu Challaga is an honest and heartfelt film that certainly makes you laugh, cry, clap, gasp and more importantly, think.

The plot is quite predictable but director Koushik Pegallapati did a commendable job of keeping you hooked to the story through interesting characters and their emotional conflicts. Basti Balaraju (Kartikeya Gummakonda), the driver of a hearse, falls for a widow, Mallika (Lavanya Tripathi), when he goes to carry the mortal remains of her husband to the graveyard.

He is so fascinated by her that he offers to marry her soon after the funeral of her husband. Initially, she seems annoyed, disgruntled and loathes him for his surreal acts, but begins to understand him as the story progresses.

Koushik tells the story of Basti Balaraju with empathy and affection. He keeps the humour intact while driving home the message that one should stop dwelling on the past and not let it affect your present. The first-timer director had employed a strategy, which is to juxtapose serious issues with a dose of comedy and philosophy.

The film stands on a level of equality with respect to death and birth and also accentuates the best intention that life is not a sacrifice but an opportunity to be happy regard less of the circumstances. The film has its heart in the right place and makes some valid points, but it also takes its own sweet time doing so. The love track between Balaraju and Mallika is stretched beyond necessity.

We get Koushik’s point early on, but the screenplay slogs along at a languid pace telling the same point over and over again in an exaggerated manner that one may treat them as a joke. Even the Aamani and Srikanth Iyyengar track is a little shaky as the director spent too much time establishing the fact that the latter waits for an opportunity while thinking about the repercussions in parallel.

But these are small shortcomings in a story that comes with good intentions. It is certainly a film, which holds a mirror to the society we live in. What’s refreshing is the director is able to give a consistent tone to the narration and his ability to extract the best from his actors.

The first hour of Chaavu Kaburu Challaga is quite a smooth ride. The songs and the sharp dialogues add weight to the narrative. If you are willing to leave disbelief, you will find yourself entertained until the intermission.

The second hour of the film, however, redefines all the usual cliches including a mother and her constant battle against loneliness, a stubborn parent-in-law, who must be won over to marry the girl, the non-parent who empathise with the protagonist’s situation but can’t do much than offer a piece of advice, an unsettling tragedy and a predictable climax. Interestingly, all these sequences are interspersed with cheerful comedy overarching the philosophical idea thrown up by the film’s title.

The film rests on the appeal of its lead pair, who are nothing short of brilliant. Kartikeya has a live wire presence as he effortlessly lightens up the screen when he’s in the frame. Lavanya has dished out a performance that is both understated and genuinely heartfelt. Both the actors are on top of their game.

Of the supporting actors, Murli Sharma is a perfect fit for the parent-in-law’s role, wonderfully humanising the character instead of leaving it out as a common stereotype. Aamani too puts up a terrific show as she’s composed in the first hour and shifts gears exuding agony and turmoil in the latter part. Overall, it is a promising film that tosses around some novel ideas but it’s weighed down by occasional script contrivances.

Denial of responsibility! TechiLive.in is an automatic aggregator around the global media. All the content are available free on Internet. We have just arranged it in one platform for educational purpose only. In each content, the hyperlink to the primary source is specified. All trademarks belong to their rightful owners, all materials to their authors. If you are the owner of the content and do not want us to publish your materials on our website, please contact us by email – [email protected]. The content will be deleted within 24 hours.
Loading...
ChaavuChaavu Kaburu ChallagaChaavu Kaburu Challaga reviewChallagaentertainment newsEntertainment updateFilmheartfelt
0
Share