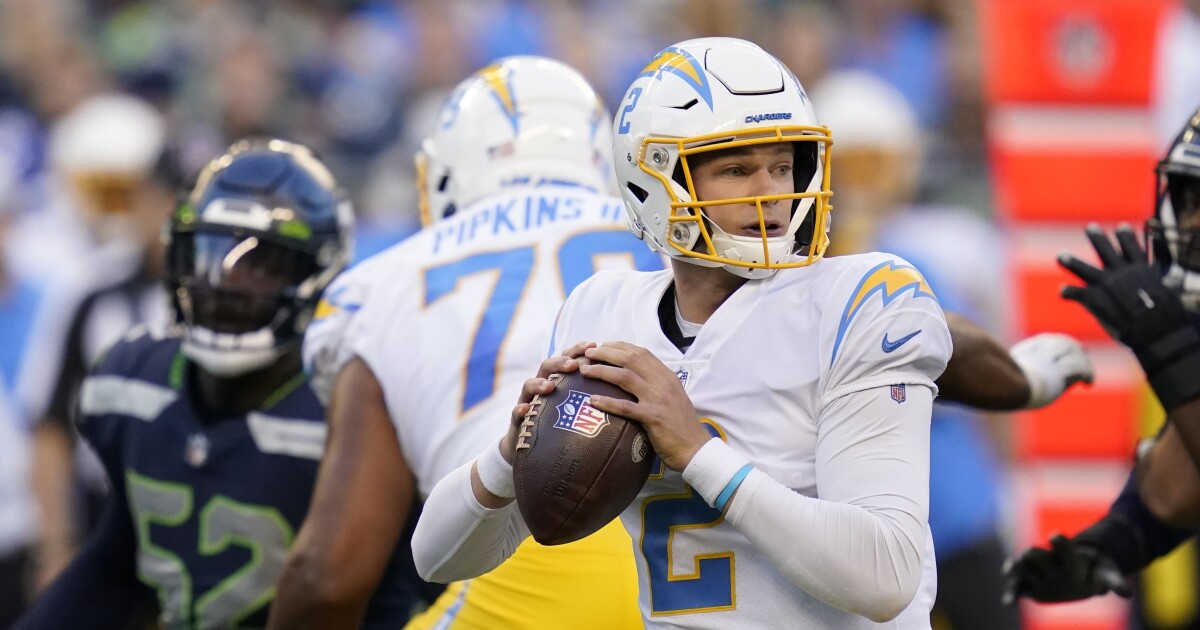 The battle for the Chargers’ backup quarterback job ended with a bit of a thud Saturday as the offense again struggled behind a leaky line in a 27-0 loss to the Seattle Seahawks.

Afterward, coach Brandon Staley admitted there’s a chance the team could keep both Chase Daniel and Easton Stick when final cuts are made. Teams must trim their rosters to 53 players by 1 p.m. PDT Tuesday.

“I definitely think that that’s a possibility,” Staley said. “We’ll dive into those specifics here in the next couple days. But I think both of those guys are assets for our football team.”

Daniel played most of the first half, missing two series because of tingling in his right hand caused by a hit to his funny bone. He completed nine of 12 passes for 70 yards.

Stick relieved Daniel for good late in the second quarter and ended up 10 of 17 for 76 yards.

The closest the Chargers came to scoring was a missed 47-yard field goal by Tristan Vizcaino in the second quarter. Their longest play netted only 16 yards, a Daniel-to-Tyron Johnson completion.

Daniel, who is entering his 13th season, said he sees the value in keeping two quarterbacks behind Justin Herbert, especially with the possibility of injury or COVID-19 issues.

The Chargers could open the season with Herbert, Daniel and Stick on their 53-man roster and have only Daniel or Stick active on game day to serve as the backup.

Other observations from Saturday night’s game:

On the play Daniel was injured, Staley said running back Joshua Kelley missed an assignment.

Daniel was sacked by an untouched Cody Burton and fumbled with Seahawks safety Marquise Blair returning the ball 17 yards for a touchdown.

From his linebacker position, Burton blitzed through the middle and reached Daniel just as he was readying to throw.

“I feel good,” Daniel said later. “I feel a lot better. I just sort of got hit on the funny bone area and had some numbness and tingling in my two fingers.”

Left tackle Trey Pipkins continued to struggled on another night when the Chargers’ offensive line depth was tested mightily.

Pipkins was beaten cleanly by defensive end Darrell Taylor for a sack in the second quarter and twice was penalized for false starts.

“I was concerned about how we played,” Staley said of the offensive line as a whole. “I didn’t feel like we gave ourselves a good enough chance for our skill players and our quarterbacks to operate.”

With all five offensive line starters sitting out, the Chargers surrendered five sacks. They averaged only 2.5 yards on 17 rushing attempts. More than a third of their 43 yards on the ground came on one Larry Rountree III carry.

The Chargers also entered Saturday with their placekicking situation unsettled between Vizcaino and Michael Badgley.

That competition didn’t exactly heat up against the Seahawks, either.

The only field-goal attempt was a 47-yard wide-right miss by Vizcaino. He also had the Chargers’ lone kickoff, sending the ball about eight yards deep for a touchback to open the second half.

“These guys had a lot of kicks this preseason,” Staley said. “So there’s enough to evaluate. I wish there were more tonight in that environment … But we’ve got plenty of body of work on both players.”

Vizcaino has consistently shown a more powerful leg, something that gives him the advantage on kickoffs.

Badgley is the more experienced option and seemed to finish training camp with more momentum.

When training camp opened, Brandon Facyson was battling for a starting job at cornerback. He finished the preseason clearly behind rookie Asante Samuel Jr. and with a rocky game.

Late in the first quarter, Facyson missed badly in attempting to tackle running back Alex Collins on what became a 13-yard pass reception, setting up a five-yard touchdown run by Collins moments later.

Facyson also was beaten on a fourth-down conversion in the second quarter. Geno Smith’s completion to Aaron Fuller covered 14 yards.

Edge rushers Kyler Fackrell and Uchenna Nwosu both played again though neither made an appearance on defense. Their action instead was limited to special teams as Staley and his staff continued their evaluations.

Denial of responsibility! TechiLive.in is an automatic aggregator around the global media. All the content are available free on Internet. We have just arranged it in one platform for educational purpose only. In each content, the hyperlink to the primary source is specified. All trademarks belong to their rightful owners, all materials to their authors. If you are the owner of the content and do not want us to publish your materials on our website, please contact us by email – [email protected]. The content will be deleted within 24 hours.
Loading...
53manChargerschaseDanielEastonnews updatequarterbacksroster
Share

Justin Bieber becomes most listened to artist ever on Spotify