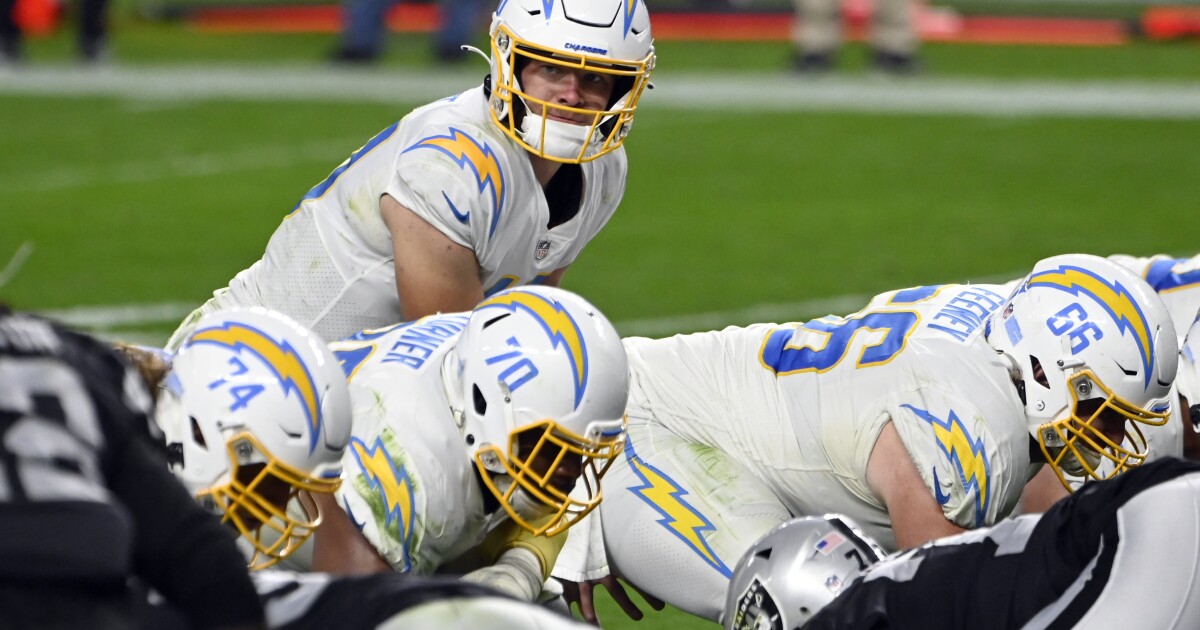 One-hundred and sixty-six days ago, the Chargers opened training camp with a rookie head coach and the typical fresh-start optimism, but no certainty where they’d end up.

On Sunday, they’ll play the last game of this NFL regular season before a national television audience in prime time to determine the league’s 14th and final playoff spot.

“These are the kind of games you wish you were playing this time of year and we are,” edge rusher Joey Bosa said. “So it’s a great opportunity for both sides. I think we all grasp that, for sure.”

The Chargers and Las Vegas Raiders meet at 5:20 p.m. at Allegiant Stadium, a building bearing the name of an airline, to determine whose season remains at cruising altitude.

In peak fashion for this quirky NFL season, there’s no guarantee entering Sunday that, in fact, it will be a solo flight into the playoffs.

As unlikely as it sounds — Indianapolis is favored by more than two touchdowns — if the Colts lose at Jacksonville, the Chargers and Raiders would both advance should their game end tied.

Regardless of any other outcomes Sunday, the Chargers advance with a victory or a tie.

So, this isn’t a must-win for the Chargers. It’s a must-not-lose.

“We’re definitely built up for this moment,” safety Derwin James Jr. said. “But we can’t think too much about what we did in the past because we know the Raiders are coming out fighting for a playoff spot, too.”

In that past, the Chargers defeated the Raiders 28-14 on Oct. 4 at SoFi Stadium. Yet that game was so long ago Las Vegas has since changed head coaches and survived a few other developments that could have derailed its season. The Raiders have won three in a row.

The Chargers arrived here after losing three of four during one stretch, going two months without winning consecutive games and losing as 13-point favorites at hapless Houston.

The earlier victory over Las Vegas was part of a 4-1 start to a Chargers season that has featured notable road wins over Kansas City, Philadelphia and Cincinnati, each a playoff qualifier.

Brandon Staley, who until 51 weeks ago had never been a head coach at any level, has his first team on the verge of making the postseason after the Chargers finished a combined 12-20 in the seasons before he was hired.

“I think that the more hopefully that we’re here we’ll have a lot of these types of games,” Staley said. “We’ve played in a lot of big games like this throughout this season, where it’s been prime time, only game in town, against a playoff-caliber team.”

That includes the first matchup between these AFC West rivals, which happened on a Monday night. Last season, the Chargers’ visit to Las Vegas came in a Thursday night showcase that went to overtime.

Justin Herbert scored on a one-yard sneak in the final 90 seconds to win that game, another highly contested, tightly wound muscle dance very much a possibility this time.

In one-score finishes, the Chargers are 5-4 and the Raiders 6-2, each of the three victories in their current winning streak coming by four points or less. Las Vegas last weekend won 23-20 at likely playoff-bound Indianapolis.

The Chargers pulled away at home to defeat Denver by three touchdowns in a game that lacked suspense but not significance. That win was critical to remaining alive, something defensive tackle Justin Jones said was good preparation for Week 18.

“The guys on our team know the gravity of this game,” he said. “We’ve known that since last week, so it’s all the same for us.”

Still, meeting the Raiders just off the Strip with the rest of the NFL watching and a playoff berth waiting makes this game nothing at all like any the Chargers have played this season. Or maybe any season.

“Sunday night in Vegas, the energy is definitely going to be flowing a bit,” Bosa said. “The nerves are always there. … I’m going to just try to attack this like I have all year and play with a lot of energy and passion.”

There should be no shortage of either given the stakes at Allegiant Stadium, where the NFL’s postseason is taxiing for takeoff.

Denial of responsibility! TechiLive.in is an automatic aggregator around the global media. All the content are available free on Internet. We have just arranged it in one platform for educational purpose only. In each content, the hyperlink to the primary source is specified. All trademarks belong to their rightful owners, all materials to their authors. If you are the owner of the content and do not want us to publish your materials on our website, please contact us by email – [email protected]. The content will be deleted within 24 hours.
ChargersgamemustnotloseNationalnews updateRaiderssports newssports update
Share

People & perfume: The business of fragrances

What’s your most anticipated release in 2022’s stacked first quarter?

The Most Important Hour of the Day for Entrepreneurs…

Take An Early Look At Skate’s Fluid Movements And…