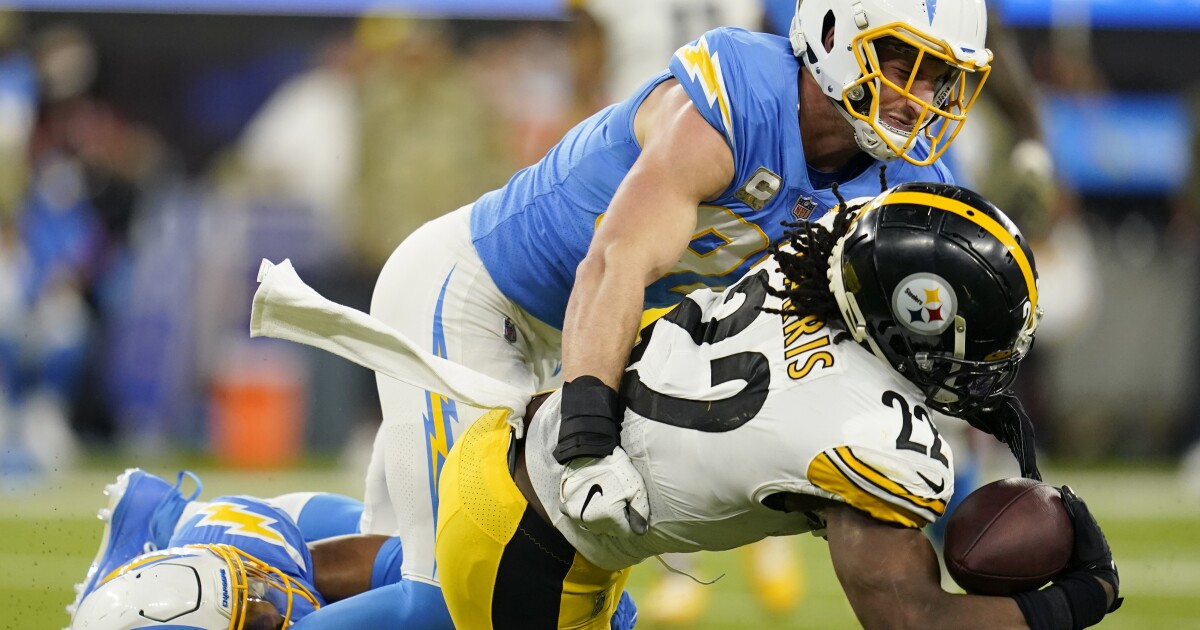 Chargers no longer on defensive about stopping the run

They still rank last in the NFL, the two teams closest to them — Detroit and Houston — a combined 2-18-1.

Yet to be fair, any discussion of the Chargers’ season-long rushing defense must include what has recently happened.

The Chargers have limited their last four opponents to an average of 3.7 yards per carry, which would rank No. 2 over the course of the season.

They have given up 476 yards on the ground during that stretch, but it has taken the opposition 129 attempts to get there.

“We just got tired of all the noise, people saying that they can run all over us,” edge rusher Uchenna Nwosu said. “As a man, that just hurts your pride. At some point, you have to muscle up and say, ‘We’re going to just start punching dudes in the mouth.’”

Since their week off, the Chargers are the ones who have been more frequently landing the blows. In their last two games, they held Minnesota and Pittsburgh to 158 yards in 51 carries, an average of 3.1.

Defensive coordinator Renaldo Hill explained that the coaching staff stressed improvement against the run by reteaching many of the principles the Chargers employ in their schemes.

During the season’s first six weeks, the defense often was ripped apart up front because of miscommunication or improper technique. The success of the Chargers’ system depends heavily on each player correctly handling his responsibilities.

“That’s not just the psychical aspect of the game but the mental part, too,” defensive tackle Justin Jones said. “You have to take the time outside the facility to sit down and study your position, study the guys next to you, understand your role in the defense and understand how your part is important to our defense and how we can play as a whole. If everybody is doing their own thing, then the defense isn’t going to be as good.”

The Chargers thrived against the Steelers — 18 carries for 55 yards — despite missing starters Linval Joseph and Jerry Tillery along the defensive line. Veteran backup Christian Covington also was out.

Joseph, however, remains on the COVID list as he also deals with a shoulder injury. He won’t play this weekend.

A pair of undrafted second-year players — Breiden Fehoko and Joe Gaziano — started against Pittsburgh and excelled, both finishing with three tackles. Gaziano deflected a third-down pass and was credited with a hit on Ben Roethlisberger.

“Those guys both showed real toughness,” coach Brandon Staley said. “Beyond just the intangibles, they play well. … It wasn’t just that they were out there and playing hard and tough. Those guys produced and made plays.”

Said Nwosu: “They didn’t flinch. … They didn’t back down. They were ready for the moment. They were playing like they’ve been in the league for 10-plus years.”

After starting the fourth quarter with a 17-point lead, the Chargers were outscored by the Steelers 27-7 before Justin Herbert and Mike Williams connected on what turned out to be the deciding touchdown.

The victory wasn’t sealed until more significant contributions from the Chargers’ defensive front, this time coming off the edge. Joey Bosa and Kyler Fackrell each sacked Roethlisberger as Pittsburgh’s final series went nowhere but backward.

Bosa, who has sacks in three consecutive weeks, leads the team with 6 ½. Fackrell is second with three, followed by Tillery with 2½.

“I think it’s mainly a mindset,” Bosa said. “I think that [outside linebackers] Coach [Jay] Rodgers has been doing a great job. He came in two weeks ago with this whole new attitude. I was kind of annoyed at first, like, ‘What is this guy doing?’ But no, it was great. He pushed us to work really hard.”

On Sunday, this defensive front will match up against the NFL’s 19th-ranked running game and 20th-ranked offense. Former Charger Melvin Gordon III is the Broncos’ leading rusher, averaging 52.2 yards.

The numbers suggest that the Chargers’ run defense should continue to improve, particularly with the anticipated returns of Tillery and Covington. Denver has been limited to fewer than 100 yards on the ground in three of its last four games.

For the Chargers, this game represents a chance to perhaps even shed the anchor of being the NFL’s worst rushing defense.

“That bye week was big for us,” Hill said. “It gave us a point where we’re sitting in a bad spot. No one wanted to be sitting at [No.] 32. We want to continue to work from this point to get better. The biggest part of it was that everybody was buying in to getting this fixed.”

Starting left guard Matt Feiler did not practice Thursday because of an ankle injury. He was limited in practice Wednesday.

Denial of responsibility! TechiLive.in is an automatic aggregator around the global media. All the content are available free on Internet. We have just arranged it in one platform for educational purpose only. In each content, the hyperlink to the primary source is specified. All trademarks belong to their rightful owners, all materials to their authors. If you are the owner of the content and do not want us to publish your materials on our website, please contact us by email – [email protected]. The content will be deleted within 24 hours.
Chargersdefensivelongernews updateRunsports newssports updateStopping
Share

Having Gratitude Is Just the Beginning to True Success