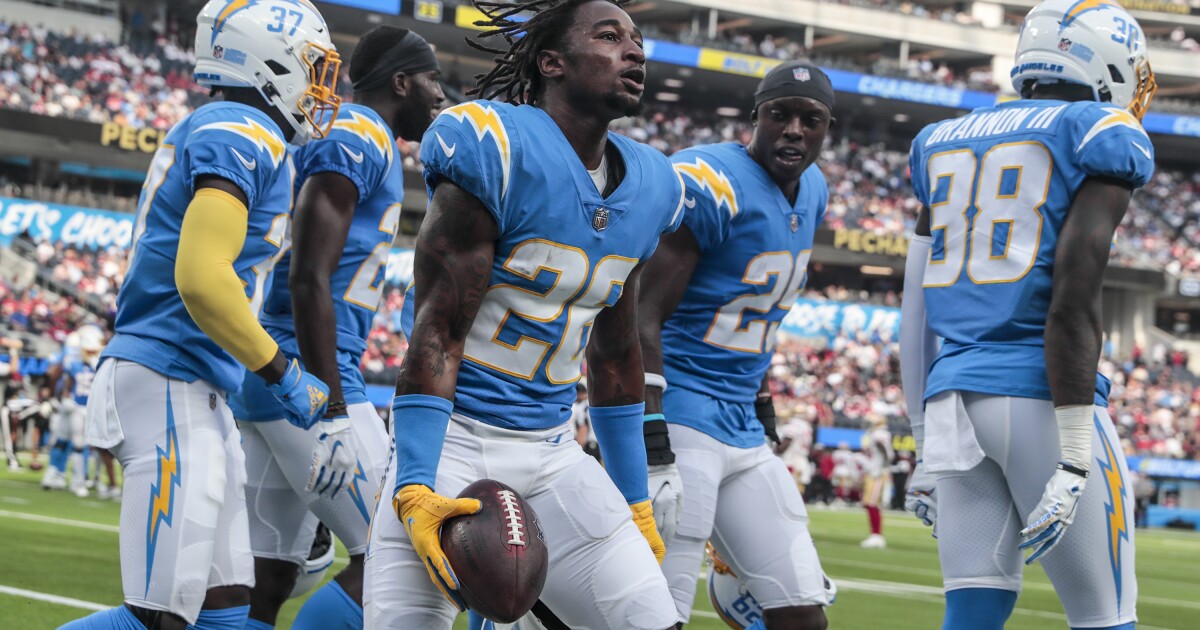 Asante Samuel Jr. had an interception and so did Tevaughn Campbell.

They finished with four tackles for loss and recovered the game’s only fumble.

But the offense sputtered epically behind a leaky line on a sloppy day that featured a combined 25 penalties and ended as a 15-10 victory for the 49ers.

Here are some highlights and observations from Sunday at SoFi Stadium:

Guards Matt Feiler and Oday Aboushi started and played into the second quarter, the first preseason action for both.

Pipkins and tight end Tre’ McKitty permitted a sack by San Francisco defensive lineman Arik Armstead on one play. Aboushi was called for an illegal low block on another.

Feiler and Aboushi were removed after two series and replaced by Brenden Jaimes and Ryan Hunter.

On that possession, Pipkins was beaten badly by veteran defensive lineman Jordan Willis for a sack and a safety, quarterback Easton Stick going down two yards into the end zone.

Later in the second quarter, Pipkins was called for holding on a play when he was beaten again.

Had this been a regular-season game, Staley suggested that the Chargers would have devised a plan to help out both tackles.

He said he remains comfortable with and confident in Pipkins and Norton. But the Chargers will need to see improvement as they continue to attempt to develop depth along the offensive front. “Those guys are going to learn a lot from this tape,” Staley said, “and we’re going to need them to.”

With Jimmy Garoppolo at quarterback, San Francisco put together a 15-play drive on its opening series. Davis was called for holding to convert one third down and Garoppolo scrambled for 10 yards to convert another.

But the Chargers stiffened after the 49ers moved inside the 35-yard line. Fackrell forced an incompletion by pressuring Garoppolo and Cortez Broughton and Brandon Facyson combined on a tackle for loss.

That set up third down and Samuel’s interception on a pass intended for wide receiver Brandon Aiyuk. Garoppolo threw too high and the ball deflected off Aiyuk’s hands and fell into Samuel’s.

“You see some of the ball skills,” Staley said. “That’s something that’s a strength of his — getting you the ball.”

Because of the high throw, Samuel was able to recover after trailing Aiyuk on the route, something Staley said he’d like to see corrected next time.

The rookie’s first signature moment was marred, however, when he pulled off his helmet while celebrating behind the end zone and was called for unsportsmanlike conduct. Samuel afterward called it a “rookie mistake.”

“That’s part of just understanding the game,” Staley said. “We want him to have that type of energy, that type of spirit. But he can wait ‘til he gets to the sideline to do that.”

Stick had a nifty 11-yard scramble for a first down in the opening quarter and completed five of his first six attempts. But his best play came when he found rookie Josh Palmer for a three-yard touchdown pass 5:49 before halftime.

Stick scampered to his right on first-and-goal and looked to be readying to run before he tossed to Palmer just before reaching the sideline.

“That’s something that you can’t teach, what Easton and Josh are doing there,” Staley said. “I thought that was a really instinctive play by both guys. That’s what you need to do when you’re down there.”

The pass was Stick’s first completion to a wide receiver after his first eight connections went to running backs and tight ends.

His best pass of the day came on the Chargers’ next series when he lofted a ball down the right sideline to Jalen Guyton for a 39-yard gain. Stick, who is competing with long-time veteran Chase Daniel to be Justin Herbert’s backup, finished 10 of 14 for 85 yards and a rating of 110.7.

Playing in the second half and surrounded by players battling for the final few roster spots, Daniel and the offense did little. The Chargers produced only 43 yards of total offense and five first downs over the final two quarters. Daniel finished 14 for 21 for 60 yards.

Early in the fourth quarter, he was intercepted by Jared Mayden, who ran it back for a 54-yard touchdown. But the score was nullified by a holding penalty during the return.

— Campbell’s interception was very similar to Samuel’s. With Lance at quarterback, a pass to Mohamed Sanu Sr. sailed high and off Sanu’s hands. Campbell secured the pickoff to set up the Chargers’ only touchdown.

In the third quarter, Campbell got beat inside by former Chargers wide receiver Travis Benjamin for a 16-yard touchdown.

— Michael Badgley won the latest round in his kicker competition with Tristan Vizcaino. Badgley made a 50-yard field goal and an extra point and both of his kickoffs reached the end zone.

Vizcaino’s only opportunity Sunday came on a kickoff, which he also put into the end zone.

“He’s just shown that he can do a lot of the jobs that we need him to do,” Staley said. “And he’s been a real factor in the kicking game.”

Niemann, who played collegiately at Iowa, was a sixth-round in May. He also was the Chargers’ top tackler in their preseason opener.

Breiden Fehoko, making a push for a roster spot, started next to Christian Covington along the defensive line ahead of Cortez Broughton.

Fehoko and Broughton ended up rotating throughout the game and also spent time on the field together.

Rookie linebacker Amen Ogbongbemiga suffered a shoulder injury early and did not return.

— Fackrell finished with a sack and three quarterback hits.

— Willie Yarbary had a four-yard tackle for loss on a third-quarter run by Wayne Gallman.

— Linebacker Cole Christiansen had a fumble recovery and seven tackles.

Denial of responsibility! TechiLive.in is an automatic aggregator around the global media. All the content are available free on Internet. We have just arranged it in one platform for educational purpose only. In each content, the hyperlink to the primary source is specified. All trademarks belong to their rightful owners, all materials to their authors. If you are the owner of the content and do not want us to publish your materials on our website, please contact us by email – [email protected]. The content will be deleted within 24 hours.
Loading...
49ersChargersdefenseliftsLineLossnews updateoffensive
Share

Nokia 3.4 gets Android 11 update in India – Times of India