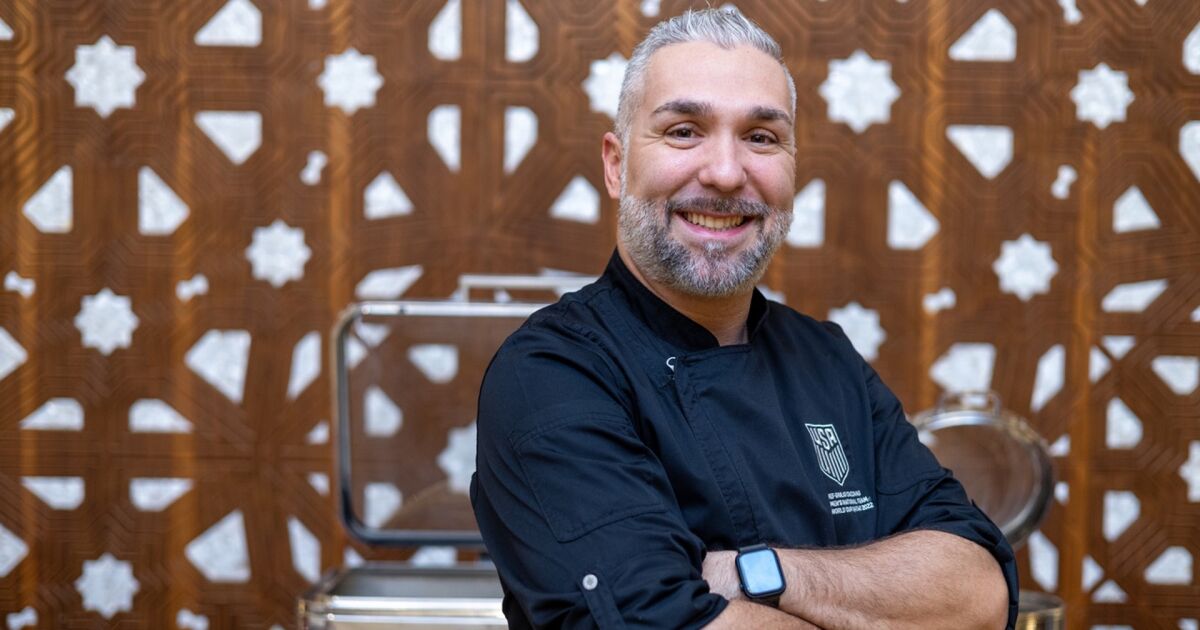 Thursday was Thanksgiving and even in Qatar that means turkey. The problem for Giulio Caccamo, the newly minted chef for the U.S. World Cup team, was where to find it.

Turns out you can’t, at least not in the quantity or quality Caccamo wanted. So he had to have the birds brought in by plane from the U.S. (You know turkeys can’t fly, right?)

“Tonight we’re going to have some turkey, some sweet mashed potatoes with marshmallow. So we kept it traditional,” Caccamo said on the eve of the Americans’ crucial group-stage showdown with England on Friday.

That meal was one of dozens Caccamo will prepare for the national team and its staff during their stay in Qatar. Yet the cooking is the least of his challenges since it doesn’t matter how good the food is if nobody eats it. When you’re dealing with 26 young men, including two teenagers, getting them to eat their vegetables isn’t easy.

That’s where the artist in Caccamo comes in.

“It’s about being creative and healthy at the same time,” he said. “You have to give them healthy food [so] that they’re good to run for 90 minutes. Still, it must be fun and must be creative. I believe the emotional part is important when it comes to food so you must touch them. They must feel happy when they come into the meal room and see what they’re going to eat. What’s new?

Caccamo loves food. He lives it, breathes it and … well, eats it. Which makes him just the kind of guy you want in charge of feeding your World Cup team because while an army might march on its stomach, a soccer team plays on its, which makes a good chef almost as important a good goalkeeper.

“I take it very seriously,” Caccamo said of his job.

The players say it shows.

The job wasn’t one Caccamo sought — or one that even existed — a little more than a year ago when the U.S. flew to El Salvador for the start of World Cup qualifying.

Unlike Mexico, which has traveled with a team chef in the past, the U.S. has preferred to work with the staff at whatever hotel in which the team resides. At the Intercontinental in San Salvador that was Caccamo, who quickly won over U.S. coach — and noted foodie — Gregg Berhalter, not just with his cooking but also with his work ethic and meticulousness.

With the World Cup confined to one city and the U.S. team spending the tournament in one hotel this year, the idea of taking a chef to Qatar seemed like a good one. After months of discussion, Berhalter offered the job to Caccamo, who, at 39, thought his World Cup days had passed him by.

“You know football is like religion for us,” the Italian-born and trained chef said. “Since you were young you always have the dream to play in a World Cup. So, yes, even if Italy is not here, at least we get one Italian to the World Cup.

“I am privileged and blessed to be here. It is a once-in-a-lifetime experience,” he continued. “I’m very grateful. Not only living the experience to be here but being with them because as soon as you enter the group, you can feel the atmosphere. It’s like a family.”

Caccamo, his sous chef and a local staff of 11 others prepare three daily buffet-style meals for up to 70 people and, turkey aside, very little of what they prepare is imported. Instead, they scour local markets for fresh ingredients. Menus are planned with the help of team nutritionists and a calendar since what goes into each dish — protein or carbohydrates, for example — is influenced by how close the next game is scheduled.

“We don’t cook a lot in advance,” Caccamo said. “We don’t waste food. That’s a really important matter for me.”

A personal chef is just one of the perks available for the U.S. players at the Marsa Malaz Kempinski Hotel, the team’s sprawling five-star home in The Pearl, a 1½-mile artificial island built in Doha’s West Bay. The hotel, in fact, is a perk of its own.

“It seems like you hit the jackpot in a way to be able to secure these venues because it is important to try to get it right,” Berhalter said. “We went to a lot of lengths to make it accommodating, to create the type of environment that the players are used to, understanding that we want to be here for a long time.”

Creating that environment required bringing in 15 tons of equipment and other support material and setting up a players lounge at the hotel that features pool tables, large-screen TVs and a putting green.

“The whole nine yards,” Acosta said. U.S. Soccer even brought along a barber.

Perks are nothing new to the World Cup. For the 2010 tournament in South Africa the late Diego Maradona, then Argentina’s coach, demanded his suite be remodeled to add an expensive toilet, a throne worthy of a soccer king. The Brazilians insisted the water in their hotel pool be heated to exactly 90 degrees and the New Zealanders asked for golf lessons.

All those requests were granted — and some sports psychologists say the expense is worth it. Creating an environment of comfort, one players are used to, can pay off in better performance, they say.

Defender DeAndre Yedlin, the only holdover from the last U.S. World Cup team in 2014, said the fact players will sleep in the same bed throughout this tournament already has made a difference. In Brazil, the U.S. team flew nearly 13,000 miles to play four games; its longest trip in Qatar will be the 52-mile bus ride to the edge of the Qatari desert for the game with England.

“The first day we got here Gregg told us, ‘Unpack your things. Put your books on the bookshelf, put your clothes in the drawers, get comfortable here,’” Yedlin said. “That has a pretty positive effect because you can really kind of settle down and feel at home.”

On Thursday, they even had a traditional Thanksgiving dinner.

Denial of responsibility! TechiLive.in is an automatic aggregator around the global media. All the content are available free on Internet. We have just arranged it in one platform for educational purpose only. In each content, the hyperlink to the primary source is specified. All trademarks belong to their rightful owners, all materials to their authors. If you are the owner of the content and do not want us to publish your materials on our website, please contact us by email – [email protected]. The content will be deleted within 24 hours.
CaccamoCheffeelGiuliohelpshomeMensnews update
Share