Notice: amp_is_available was called incorrectly. `amp_is_available()` (or `amp_is_request()`, formerly `is_amp_endpoint()`) was called too early and so it will not work properly. WordPress is currently doing the `pre_get_posts` hook. Calling this function before the `wp` action means it will not have access to `WP_Query` and the queried object to determine if it is an AMP response, thus neither the `amp_skip_post()` filter nor the AMP enabled toggle will be considered. It appears the theme with slug `publisher` is responsible; please contact the author. Please see Debugging in WordPress for more information. (This message was added in version 2.0.0.) in /home/runcloud/webapps/techilive/wp-includes/functions.php on line 5313
 ‘Chenchu Lakshmi’, a Telangana Chindu Yakshaganam takes centrestage - TechiLive.in 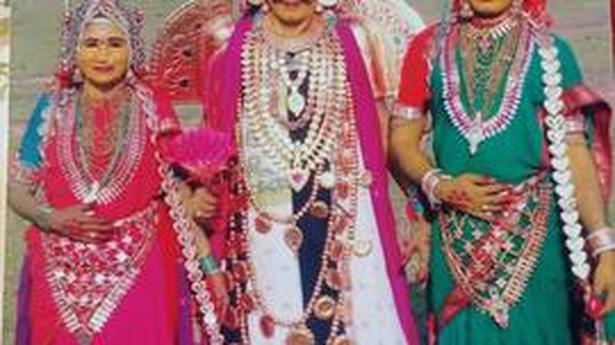 “Chindu Yakshaganam of Telangana is distinct, it is not as sophisticated and Sanskritized as the Yakshagana from Karnataka,” points out renowned Telugu modern theatre personality Srinivas Denchanala.

The founder-director of the 37-year-old Janapadam Theatre Repertory dons the director’s hat along with Chindula Shyam to present Chenchu Lakshmi, a Telangana Chindu Yakshaganam written by Chervirala Bagaiah. The live performance at Ravindra Bharathi on March 23 in collaboration with Department of Language and Culture, brings a ray of hope for the 20 participating artistes in the COVID-affected milieu.

Though Chindu Yakshaganam has a cultural significance in Telangana, the theatre art form is dying slowly. The Chindu community that performs Yakshaganam, has a distinct perception of society. “They are radical performances of stories including mythology,” states Srinivas, adding, “Chindu artistes used to perform thousands of shows across Telangana, but now it has been reduced to a few hundred. Unfortunately, all folk/theatre forms are dying.”

Chenchu Lakshmi, a traditional dance ballet shows Lord Narasimha, who after killing the demon Hiranyakashipu falls in love with Chenchu Lakshmi, who has been raised in the forest for 16 years. “What the consequences of this love story are, are enacted, danced, sung and narrated through Chindu Yakshaganam,” shares Srinivas. Being a contemporary theatre director, Srinivas has ‘rejuvenated’ the performance to suit the modern context. “The artistes usually perform in small spaces in villages but we have used the larger stage space of Ravindra Bharati and also brought in slight changes in lights and sound,” he elaborates.

Although the show is being staged four days prior to World Theatre Day on March 27, Srinivas calls it a ‘non-occasion performance.’ “For the last 37 years, My plays have never been for an occasion. Performance is itself an occasion to celebrate theatre every day,” he says in his inimitable style. Even before the pandemic hit, Srinivas notes, the situation had been challenging for Telugu theatre artistes. “Telugu theatre has suffered immensely due to the indifference of audience and the government in the two Telugu states; except a few experimental plays, most Telugu plays show little creativity. Unless the audience gets bored with commercial cinema, TV serials and a virtual lifestlye, a change in content for theatre like the plays Hayawadana by Girish Karnad and Macbeth by Shakespeare will not happen,” he points out.

Srinivas has not been able to pay the rent of his company in Kukatpally for the past six months. “Government has very little or no funds for theatre and to encourage creative people,” he rues. He spent the lockdown period writing poetry, participating in seminars and reading plays with his group members. A recorded performance of Srinivas too was shown online, an experience he dislikes. “I hate online theatre,” he retorts. “I will beg or sing but will not do virtual theatre. Live performance gives strength to the artistes which is missing in digital theatre.”

Loading...
Denial of responsibility! TechiLive.in is an automatic aggregator around the global media. All the content are available free on Internet. We have just arranged it in one platform for educational purpose only. In each content, the hyperlink to the primary source is specified. All trademarks belong to their rightful owners, all materials to their authors. If you are the owner of the content and do not want us to publish your materials on our website, please contact us by email – admin@techilive.in. The content will be deleted within 24 hours.
centrestageChenchuChenchu LakshmiChinduChindula Shyamentertainment newsEntertainment updateJanapadam Theatre Repertory
0
Share

The latest on the coronavirus pandemic and vaccines